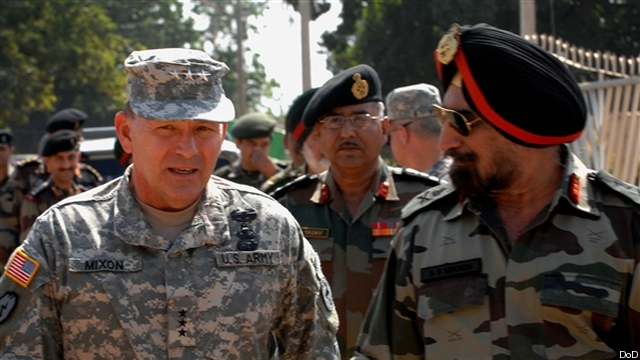 US and Indian officers

WASHINGTON: Forget Gandhi and satyagraha. India needs to be more strategically assertive and take China on, a longtime national security advisor to New Delhi said today. And if the US doesn’t like it, then “screw you.”

But Washington should like a more aggressive India, said the American-educated Bharat Karnad, because it’s the only thing that can hold the line against a rising China.

“A very strong, pugnacious India is going to help you guys in some sense breathe easy, which you won’t be able to do otherwise,” Karnad told me after his remarks this morning at the Carnegie Endowment for International Peace.

“How are you going to manage China? You can’t without India’s help,” Karnad continued. “They’re rivaling you and very soon… they’re going to take you apart, [because] you don’t have the resources anymore to have even 12 carrier task groups.” (The US currently has 10 carriers, with an 11th being completed, leading to potential gaps in carrier presence in key regions). 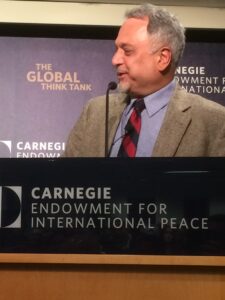 India can be particularly helpful in the South China Sea, Karnad said, where Chinese territorial claims overlap almost every neighboring countries’ and where Beijing is building bomber-capable airstrips on artificial islands. In fact, the South China Sea is the one area Karnad thinks the Indian government is being almost assertive enough already.

“The Indian government has finally found a voice,” he told the Carnegie audience I asked about the South China Sea. Just months ago, India signed a security cooperation agreement with the Philippines — the biggest target of Chinese provocations — and Indian warships regularly visit Philippine ports. India is building ties with Australia, Singapore, and Thailand. In addition, “we have a burgeoning relationship with Taiwan,” he said. “The Chinese seem to be aware of it and they’re getting increasingly worked up.”

Overall, “we are beginning, I think, to appreciate that we need to be more vocal and more visible in our support of the Southeast Asian nations who have in the past looked to India and been frustrated,” Karnad said. “We’re a lot more active now. That doesn’t mean we’re going to go full pell-mell proactive — we should — but we’re getting there.”

But, I asked Karnad after the panel, aren’t there limits on what the Indian navy can really do in the South China Sea? “They’re essentially self-imposed,” he said. For example, the military’s old “Far Eastern Command” was renamed the “Andaman Command,” after islands in the Indian Ocean, a mental pull-back from the Pacific. The command needs its old name back, a new attitude, and, on top of that, bases in Vietnam.

What about the Chinese? “The Indian navy is very confident that the Chinese aren’t there yet and won’t be there any time soon, for the next 15 to 20 years,” Karnad told me, “but we have to look beyond 15, 20, 25 years.”

True, the Chinese navy already has an aircraft carrier, he said, “but you know having a boat is not enough. You have to be able to integrate a carrier into fleet operations. That takes a long time. It took the Indian navy about 30 years.”

“As far as I know, no combat aircraft has actually flown off a sailing carrier, a Chinese carrier,” Karnad said. To the contrary, he said, Chinese pilots are still crashing regularly when they try to land on a simulated carrier deck ashore — something much shorter than a conventional runway but still far more manageable than the rolling, pitching deck of a ship.

Nevertheless, Karnad considers China the No. 1 threat to India in the long-term. It’s not Pakistan, with which India has fought at multiple wars, declared and otherwise. Pakistan lacks the economic base to sustain a military that can threaten its much larger neighbor, he argued. India would do better reaching out to Pakistan and reopening trade along British-era rail lines and co-opting Islamabad instead of confronting it.

“We fixate on the wrong threat… looking in the wrong way at Pakistan when the real threat is China,” Karnad told the audience at Carnegie. As a result, “you really do not have the kind of capabilities to thwart and deter China from the larger design of containing India.” Karnad’s referring to China’s so-called “string of pearls,” a series of agreements and investments in countries from East Africa to Sri Lanka to Burma.

Yet Indian strategists still focus on Pakistan, “which is not a threat, cannot be a threat, was never a threat….despite having nuclear weapons,” he said. Pakistanis are smart enough to know that the “exchange ratios” come out badly for them in a nuclear war, Karnad told the Carnegie audience, which didn’t seem particularly reassured.

Overall, the gleefully provocative Karnad got a lot of nervous laughter at Carnegie, with his American fellow-panelists smiling and wincing by turns. It was a fascinating view inside the mind of a leading Indian hawk.

His new book, Why India Is Not A Great Power (Yet), contains plenty of suggestions that are sure to give official Washington heartburn. India, he argues, should resume nuclear testing and abandon its doctrine that it won’t use nuclear weapons first, allowing instead for preemptive strikes. It should put nuclear demolition charges in the Himalayan passes to close them in case of Chinese invasion (the two countries have a decades-long border dispute that led to war in 1962). It should base nuclear-missile submarines in Australia, if the Aussies could be trusted not to share too much intel on the subs with the United States. It should arm Vietnam and Tibetan rebels against China. 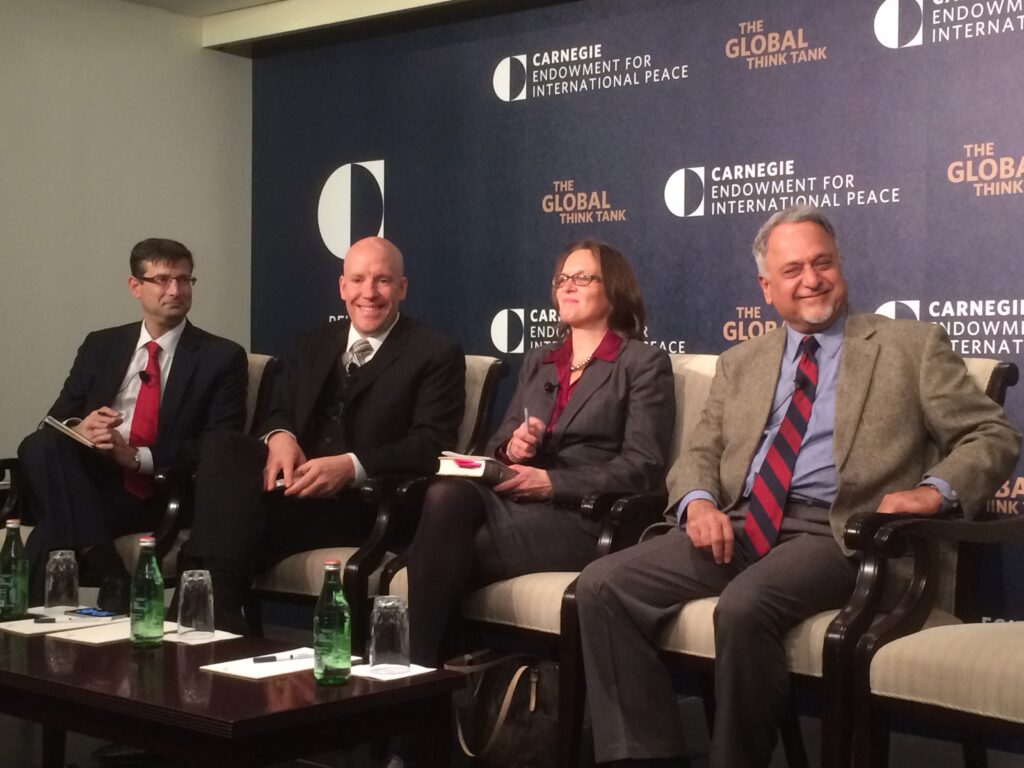 “It’s fascinating,” said Council on Foreign Relations senior fellow Dan Markey. “[Would] an aggressive, even a pugnacious India….serve American strategic purposes?” he asked. “Right now I don’t have an answer. What I know is, it would make us profoundly uncomfortable.”

“A big part of why America has been so eager to partner with India… is because it sees none of that pugnacity or aggressiveness,” Markey continued. The idea of India as essentially peaceful made it possible for President George W. Bush to lift sanctions imposed on New Delhi for its 1998 nuclear tests and sign a deal on civil nuclear cooperation, for example. An India that stirred up trouble in its region, he said, could easily alienate Americans.

Western praise doesn’t count much for Karnad. “We hinder ourselves, hamper ourselves, trying to be a quote ‘responsible state.’… trying to gain brownie points from other states,” he told the Carnegie audience.

He was even blunter with me after the panel. “India should be disruptive in its policies. Screw the goddamn status quo in every way,” Karnad said. True, if India starts testing thermonuclear weapons, Washington will “go apocalyptic,” he acknowledged. “Who cares? We should say, ‘screw you buggers.'”

Karnad is writing as a kind of “Indian Machiavelli,” Markey said, “whispering in the ear of the Prince” with truths others don’t dare say. It’s “useful and provocative.”

That said, Markey went on, it’s unlikely the New Delhi establishment will take Karnad up on his suggestions. “Is it even remotely conceivable that the India that we actually live with could become the India you’re describing?” he asked Karnad. “My bet is no.”

“Prime Minister [Narendra] Modi is moving in this direction,” said another panelist, former State Department and Hill staffer Lisa Curtis. “He’s pursuing a much more assertive foreign policy and a more courageous foreign policy than his predecessor, Manmohan Singh.” Modi has visited the US twice, hosted President Obama once, visited neighbors like Sri Lanka, Mauritius, and the Seychelles, and built up trilateral military cooperation among the US, India, and Japan.

The question is whether this movement will continue in a consistent fashion. “This is a book that I think in a sense reflects a lot of my frustration over the last 30-odd years in Delhi,” said Kanard, who’s advised the Indian prime minister’s office, foreign ministry, and armed forces over the decades. He notably served on India’s first-ever National Security Advisory Board, convened by the Indian National Security Council to draft a doctrine on nuclear weapons — which, Karnad grumbled, the politicians then threw out “for no reason I can fathom” in favor of a simplistic principle of massive retaliation.

“India has been lacking in strategic vision,” Karnad lamented. With constant turf wars among the 72 government departments and a deep-seated distrust of military professionals, he said, “all decisions are ad hoc….so we are shooting off in all directions without the kind of impact we should have had.” That is the fundamental reason, he said, that India has not realized its potential to be a great power — yet.