TEL AVIV: With over 80 percent of Israeli’s commerce carried by sea and its offshore gas fields crucial to the economy, the country is boosting spending on protecting its shipping lanes, littorals and ports with an array of weapons including underwater capabilities, heavily armed patrol boats and new submarines.

Hezbollah sees the large natural gas reservoirs and the rigs that probe them in the Mediterranean as potential targets and this puts heavy pressure on the Israeli navy to safeguard them.

David Ben–Bassat, former commander of the Israeli navy, told Breaking Defense that after Israel declared its Exclusive Economic Zone (EEZ), the maritime arena became very important and very complicated. “The navy’s task is to protect the Israeli interests in the EEZ. The protection is being performed now by the Israeli navy’s Sa’ar 5 missile boats, by autonomous boats carrying weapon stations and by UAS [drones] patrolling the EEZ to try and detect any developing hostility.”

The former navy chief said that in recent years the government has recognized the importance of naval forces and boosted their budget.  “The new Sa’ar 6 corvettes built now in Germany will carry sensors and weapon systems that will enable them to intercept maritime and aerial threats,” he said. “Among those are the Barak-8 sea-air missile system and the C-Dome, the maritime version of the Iron Dome.”

Rafael is the main source for the Israeli special underwater systems. Doron L., director of marketing for the naval systems directorate of Rafael, told Breaking Defense the company is focusing on three capabilities when it deals with the underwater fighting arena: communication between submarines; protection against torpedo attacks; and an undetectable sonar.

The Rafael official discussed some systems cleared for export. No details were shared about systems used by Israel for its own defense. But you can connect the dots.

This system enables the submarine to stay in touch with the navy’s headquarters while submerged. FloatLink is fired from the submarine’s torpedo tubes, rises to the surface and unfolds a SATCOM antenna. “When the exchange of transmissions ends, the FloatLink [self-destructs]. This minimizes the danger that the enemy will locate the submarine,” Doron L. said. “It has other advantages; it does not disclose submarine position and has no maneuverability limitations.”

Submarines can also serve as an underwater base for divers. For these missions, Rafael has developed the Deep Link system, a system designed to prevent interception of underwater communications. DeepLink can be carried by small underwater vehicles or divers.

According to the Israeli company, built-in message distribution protection and multi-hop mechanisms increase the network’s reliability and the connectivity between nodes, providing a solution for non-line-of-sight scenarios as well as high reliability in deep and shallow water, as well as in the cluttered confines of harbors.

The Israeli company has also developed systems aimed at protecting surface ships from the growing threat of increasingly advanced acoustic torpedoes. One of the unclassified capabilities they are offering is the LeScut, launched from a surface ship. It’s designed to respond simultaneously to multiple torpedoes of different types — active and passive. It’s also programmed to defeat all types of modern torpedo logic, including range gates, Doppler shift, pulse discrimination and more.

Doron L. told Breaking Defense that LeScut requires no pre-launch input or tests, shortening the response time and eliminating errors due to incorrect settings or operator mistakes. The official said that Lescut is based on the Ultra Electronic Oceans Systems hardware and Rafael’s proven reactive acoustic module electronics and software.

Countermeasures activate automatically after launch. LeScut analyzes the environment and the torpedo and then selects from its threat library the appropriate deception signal for emission. As a result, acoustic torpedoes home in on LeScut, attacking it repeatedly, enabling the sub to evade. It operates for 10 minutes, then self destructs and sinks.

In modern maritime combat, submarines are also vulnerable to torpedoes launched from ASW helicopters, ships and other submarines. To counter that threat, Rafael has developed the Scutter, a self-propelled, reactive and expendable torpedo countermeasure, capable of protecting a submarine from both passive and active acoustic homing torpedoes.

According to the Rafael official, Scutter is launched immediately following a torpedo alert, and moves automatically to operating depth. It identifies the type of torpedo and then generates and transmits customized deception signals. The torpedo attacks the Scutter Countermeasure until the torpedo’s end of run. Scutter self-destructs at the end of its mission. 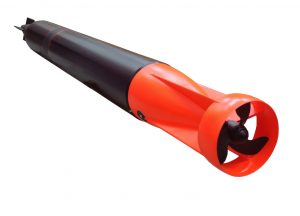 Rafael has also developed what it claims is the first hard kill torpedo system that can work even in shallow waters. The Torbuster is a fourth-generation torpedo countermeasure for submarines.

It provides effective defense against all types of acoustic homing torpedoes by means of combined soft and hard kill.

On detection of an incoming torpedo, Doron L. says, the Torbuster will be launched from an external launcher: “The previous such systems played a seduction role diverting the torpedo from its target. Here we destroy the threat.”

Torbuster propels itself to a safe distance from the submarine and then seduces the incoming torpedo by transmitting acoustic signals. It will sense when it is at the closest point of approach and explode, neutralizing the torpedo.

Rafael and other Israeli companies are developing other systems for the underwater combat zone, but these are highly classified.