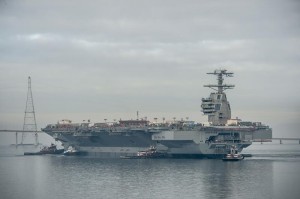 NAVY YARD: At almost $13 billion, the cutting-edge aircraft carrier USS Gerald Ford (CVN-78) has become a byword for military overruns. With the Ford‘s cost now stable and the costs of the second ship, Kennedy, coming down, however, the Navy seems convinced it’s got the money problem under control. Now they can talk about the fun stuff. But even the fun stuff is hard. 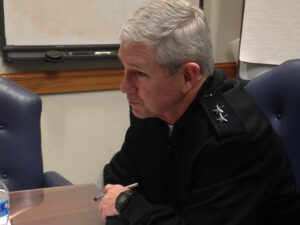 Yes, “jet car testing” is totally a thing. Aircraft carriers are so huge, complex and high-tech that simply testing key components requires measures not normally seen outside James Bond movies. The jet car track in Lakehurst, NJ simulates a fully-loaded fighter jet slamming to a stop on a carrier deck. That’s essential to proving out the Ford-class’s new Advanced Arresting Gear, which is two years behind schedule after a key component — called a water twister — had to be redesigned.

To deliver the ship on schedule, Moore has to install the arresting gear on the Ford before its testing is complete. An unanticipated problem showing up in testing the arresting gear is the biggest single threat to the Ford’s making the delivery date of March 31 next year, Moore said, but “we had to accept that risk at this point.”

Why take the risk of designing, buying and installing new arresting gear at all, though? The systems used on the current Nimitz class are time-tested, but they use maintenance-intensive and hard-to-adjust hydraulics. The Advanced Arresting Gear uses more reliable and fine-tunable electric motors. So does the Electromagnetic Aircraft Launch System (EMALS), which replaces traditional hydraulic catapults; EMALS testing is right on schedule and will progress this June to firing heavy weights off the Ford into the James River. (Unlike a Bond villain, the testers will have the Coast Guard keep civilian traffic out of the way).

Together, AAG and EMALS will not only reduce maintenance costs, Moore said, they’ll improve operations, allowing 30 percent more sorties per day — making a Ford the operational equal of 1.3 Nimitzes. What’s more, he said, “they can be precisely tuned to the weight of the aircraft.” That not only reduces strain on airframes, it allows the Ford to launch and land future aircraft that would be either too light or too heavy for the current Nimitz class. That opens new options for the Ford ships, a class whose last ship, given the fifty-year service life of carriers, will stay in the fleet until 2110.

Can Moore convince Congress that the carrier program is on track? He seems to have some credibility, at least on the staff. “Admiral Moore in the carrier office has been more open and honest and forthright in talking about cost growth than a lot of other people in other Navy programs in the past,” said one congressional source. “He’s been pretty straightforward about this for years now.”

The carrier’s most important critic isn’t satisfied, however. Former carrier pilot John McCain is now the chairman of the Senate Armed Services Committee. McCain  made his skepticism clear in recent hearings. He wants carrier-launched strike drones, lower costs, and more competition. “When there’s no competition there’s no cost control,” McCain growled just on Wednesday. “[That] certainly has been the case with the Gerald R. Ford.”

Competition is hard to achieve, however, when only one shipyard in the world can build 100,000-ton nuclear-powered super-carriers. But McCain is willing to take on that sacred cow as well. “I would hope, given new technologies” — such as drones and the F-35 — “we would be looking at alternatives as well to the Nimitz class or the latest [Ford] class of aircraft carriers,” McCain said on March 10th.

The Chief of Naval Operations has launched such a study at McCain’s request, Moore confirmed. “We’re going to go do due diligence,” he said without evident enthusiasm. “In the leadup to the Ford we did an exhaustive AOA [analysis of alternatives] 20 years ago, but saying we’re going to dust that study off is not sufficient, so we’ll go back and take another round.”

Moore won’t speculate on the study and won’t be working on it himself, he emphasized: “I’ve got a pretty hard job here.”

Among the other things that Moore’s got to worry about? The Ford class replaces almost all the steam-driven components on the Nimitzes with electric motors. That means the Ford uses roughly 50 percent more electrical power than the Nimitz, but it generates three times as much. Since the ship only uses half its available power, that leaves plenty of margin for other high-energy systems. Moore likes to talk about future carriers bristling with “a ring of lasers” to shoot down incoming missiles. Electromagnetic rail guns would also be an easy fit in terms of both power and space, he said.

On a more mundane level, not having to maintain leak-prone hydraulics should allow cutting at least 600 sailors from the crew and help save $4 billion over the 50-year life of the ship. The only major piece of hydraulics left on the Ford is the elevators that move aircraft between the flight deck and the hanger deck. And they won’t be around on the next ship in the class. Electric elevators will be ready for installation on the Kennedy.

The Kennedy will also have a less expensive and less powerful radar than the Ford. That’s a rare example of a military service reining in its ambitions rather than letting requirements — and the cost to meet them — grow. “A $500 million radar on an aircraft carrier is overkill at this point,” Moore told reporters earlier this week, after speaking at the McAleese Associates/Credit Suisse defense conference.

Originally developed for the DDG-1000 destroyer, the Dual-Band Radar on the Ford will be the finest in the fleet. It’ll also be the only one in the fleet, since even the painfully truncated DDG-1000 program — reduced to just three ships — won’t use the full DBR. Since carriers don’t coordinate their own air and missile defense, a function served by specialized Aegis cruisers and destroyers, Moore says the Kennedy and subsequent Ford-class ships will get by just fine with the same kind of radar that will be used on big-deck amphibious ships, starting with the future LHA-8. That Enterprise Air Search Radar (EASR) hasn’t been selected yet, but any number of off-the-shelf radars would meet the criteria, Moore said, as could a scaled-down version of the Air & Missile Defense Radar being built for the new Aegis destroyers. Accepting less capability, he said, should save at least $180 million per ship.

Moore has also pushed shipbuilder Newport News to streamline production and modernize its facilities, even taking Newport execs on tours of competing yards. Taking a cue from successful programs like the Virginia-class submarine, Newport News will build as much as possible of Kennedy indoors, in modules, and minimize the work done after the ship is already afloat. The yard’s even investing in “big mobile tents” to cover its open-air assembly areas so the work force can keep going regardless of sun or rain, Moore said.

Kennedy will also have the advantage of its blueprints being complete before construction starts, whereas Ford was still being built — an all-too-common breach of best practices. Between avoiding the first ship’s mistakes and streamlining the production process, Moore said, Kennedy will require 18 percent fewer man-hours to build than the Ford and should cost $1 billion less.

If it doesn’t, the contract he’s now negotiating with Newport News will impose “steeper” penalties for overruns “than we’ve had on any previous carrier,” the admiral added. “I fully expect we will award a fixed-price contract for the detailed design and construction [in] May.”