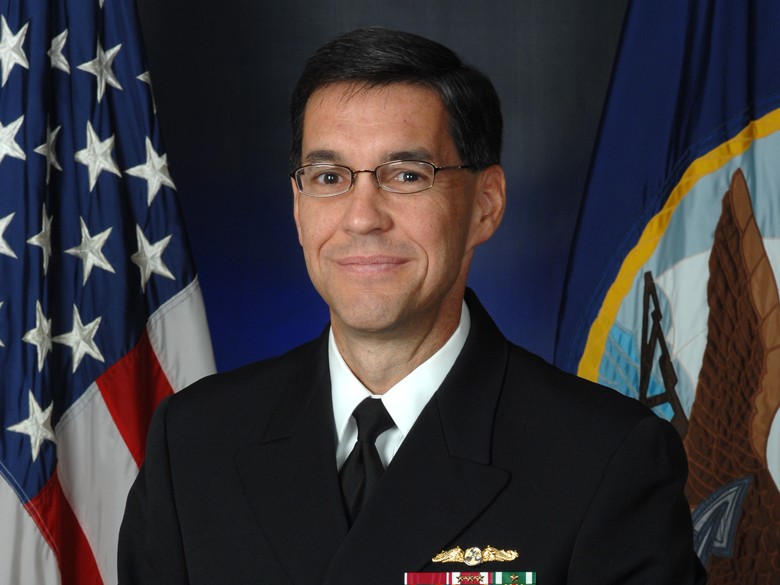 WASHINGTON: When the Navy named its next top sub-builder, Rear Adm. Michael Jabaley, back in July, I wondered where the submariner he was replacing would surface. Now we know: The Pentagon announced late yesterday that Rear Adm. David Johnson will pin  on his third star and become the top uniformed acquisition official in the Navy Department.

As Program Executive Officer (PEO) for Submarines, soon-to-be-Vice Adm. Johnson has already spent years as the “whip-cracker” coordinating the Navy’s most headache-inducing acquisition: the Ohio Replacement Program to build a new ballistic missile sub. While the service is deliberately not attempting any technological revolutions with the ORP, just building an underwater vessel that can launch nuclear missiles is really rather hard enough.

It’s also expensive, enough so that if the Navy doesn’t get a bigger ship-building budget — which looks unlikely given current fiscal gridlock — the ORP will crowd out most other construction. Johnson’s job was to stay on schedule while squeezing out every drop of cost, right down to reusing parts from the aging Ohio-class boomers the ORP will replace.

“No one should be sleeping comfortably at night,” Johnson told a roomful of submariners and contractors last year.

But when Johnson becomes Principal Military Deputy to Sean Stackley, the Assistant Secretary of the Navy for Research, Development, and Acquisition, he’ll have a far wider portfolio with even more reasons to sleep badly.

For one thing, Johnson will have to work on the one thing more complicated than a nuclear-powered submarine, a nuclear aircraft carrier. The new Ford class to replace the 1960s-vintage Nimitz is behind schedule, over budget, and under heavy fire from Senate Armed Services chairman John McCain, a famed Navy pilot himself.

At the other end of the size scale is the Littoral Combat Ship, a little ship that’s come in for big criticism: That it’s too small, too vulnerable, too expensive, and undergunned. Officials have defended LCS as well-suited for its supporting roles in hunting subs, mines, and fast attack boats. Former Defense Secretary Chuck Hagel, however, ordered the program rebooted with a more robust variant that Navy Secretary Ray Mabus calls a “frigate.” McCain & company will be watching this evolution skeptically as well.

Johnson’s headaches will extend above the water. He’ll have to help Stackley oversee the F-35C program, the Navy variant of the Joint Strike Fighter. The Navy chose to have their JSF enter service last, so hopefully the Air Force’s A-model and the Marines’ F-35B will get the bugs out. On the other hand, there’s more institutional ambivalence about the stealth fighter in the Navy than in the other services.

Then there’s the Navy’s newest acquisition office: the Deputy Assistant Secretary of the Navy (DASN) for unmanned systems that Sec. Mabus announced in April. Johnson and Stackley need to stand this organization up as well as make sure all the programs it oversees — flying drones, underwater drones, robot boats — stay on track.

Especially with Budget Control Act caps and Continuing Resolutions threatening to bite the Navy budget, Johnson may look back wistfully at the relatively simple days when he only had nuclear-powered submarines to worry about.