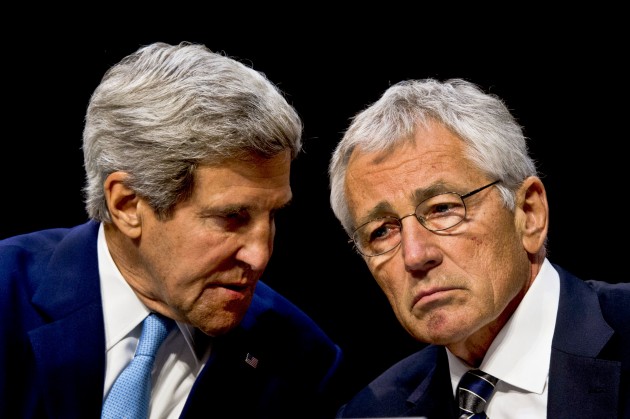 UPDATED: Through End of Today’s Hearing.

CAPITOL HILL: Secretary of State John Kerry, taking the lead in arguing the administration’s case for limited strikes against Syria for killing more than 1,400 civilians with chemical weapons, told the Senate Foreign Relations Committee that Iran and North Korea are watching what we do.

Kerry told the committee that the use of force authorization would be limited to “deter and degrade” Bashar al Assad’s ability to use chemical weapons ever again. And the former senator, clearly ready to lay out the starkest stakes possible, told his colleagues on the committee that Assad had actually launched attacks 13 or more chemical attacks. He also pledged that troops would not be sent in, although he left lots or wriggle room should things escalate after the initial strikes.

Noted liberal Sen. Barbara Boxer of California says she would support administration on use of force against Syria but “with very heavy heart and very independent mind.” Boxer pointed to North Korea and other burgeoning nuclear states as reasons for the US to strike against Syria’s use of chemical weapons. “Iran would view us as a paper tiger” if we don’t act.

After Sen. John McCain, who has pressed hard for more action against the Syrian regime, stepped forward yesterday to say he would support limited strikes against Syria. Since then, House Speaker John Boehner and his majority leader, Eric Cantor, have declared they will support Obama as he presses for approval of use of force against Syria. But not all House Republicans are with them and Boehner has declared that, while he thinks GOP members should support the president, this is a vote of conscience that leaves them free to vote as they will.

Rep. Randy Forbes, the chairman of the House Armed Services seapower and projection forces, just announced he has “no intention of voting to authorize American intervention in Syria. While the President’s decision to seek congressional authorization for military involvement in Syria shows a regard for the Constitution that has been noticeably absent for much of his presidency, I remain strongly opposed to an action that I believe will in no way contribute to America’s national security interests.”

Forbes also fired a shot at the administration over sequestration: “The President’s willingness to use our military without ensuring that it is properly funded should alarm all who view the maintenance of unparalleled American military power as a principal Constitutional duty of our Commander-in-Chief.”

After some three-and-half hours of questions and testimony, the senators left to read the draft authorization of force, due to be ready this evening. And the administration prepared to offer members a more detailed classified briefing Wednesday morning to answer many of the questions about allies, sources, methods and predicted outcomes that could not be answered in open session.

One of the most interesting aspects of today’s hearing was the clearly subordinate role played by the chairman of the Joint Chiefs of Staff, Gen. Martin Dempsey. In times past, Gen. Colin Powell and other chairmen have played crucial roles in presenting an administration’s arguments and policies. But Dempsey was clearly there to answer relatively technical questions. He answered a question about the risks of collateral damage — he told the committee he had been charged to choose weapons and targets in such combinations that the risk of collateral damage was “low” — and he offered morsels about the breadth of targets and the second and third order effects to be expected.

When Kerry offered Dempsey the chance to comment on US policy about Syria he thanked him and declined to answer. It seems pretty likely from Hagel and Dempsey’s performances today that the White House is driving almost all the policy and decision-making and has tapped kerry as its point man.

In the coming days, Congress will debate how to respond to the most recent chemical weapons attack in Syria – a large-scale, and heinous, sarin gas assault perpetrated by the Syrian government against its own people.

As a former Senator and member of this committee, I welcome this debate and I strongly support President Obama’s decision to seek congressional authorization for the use of force in Syria.

As each of us knows, committing the country to using military force is the most difficult decision America’s leaders can make. All of those who are privileged to serve our nation have a responsibility to ask tough questions before that commitment is made. The American people must be assured that their leaders are acting according to U.S. national interests, with well-defined military objectives, and with an understanding of the risks and consequences involved.

The President, along with his entire national security team, asked those tough questions before we concluded that the United States should take military action against Syrian regime targets. I want to address how we reached this decision by clarifying the U.S. interests at stake, our military objectives, and the risks of not acting at this critical juncture.

As President Obama said, the use of chemical weapons in Syria is not only an assault on humanity – it is a serious threat to America’s national security interests and those of our closest allies.

The Syrian regime’s actions risk eroding the nearly century-old international norm against the use of chemical weapons – a norm that has helped protect the United States homeland and American forces operating across the globe from these terrible weapons. Weakening this norm could embolden other regimes to acquire or use chemical weapons. For example, North Korea maintains a massive stockpile of chemical weapons that threatens our treaty ally, the Republic of Korea, and the 28,000 U.S. troops stationed there. I have just returned from Asia, where I had a very serious and long conversation with South Korea’s Defense Minister about the threat that North Korea’s stockpile of chemical weapons presents to them. Our allies throughout the world must be assured that the United States will fulfill its security commitments.

Given these threats to our national security, the United States must demonstrate through our actions that the use of chemical weapons is unacceptable.

The President has made clear that our military objectives in Syria would be to hold the Assad regime accountable, degrade its ability to carry out these kinds of attacks, and deter the regime from further use of chemical weapons.

The Department of Defense has developed military options to achieve these objectives, and we have positioned U.S. assets throughout the region to successfully execute this mission. We believe we can achieve them with a military action that would be limited in duration and scope.

General Dempsey and I have assured the President that U.S. forces will be ready to act whenever the President gives the order. We are also working with our allies and partners in this effort. Key partners, including France, Turkey, Saudi Arabia, the United Arab Emirates, and other friends in the region, have assured us of their strong support for U.S. action.

In defining our military objectives, we have made clear that we are not seeking to resolve the underlying conflict in Syria through direct military force. Instead we are contemplating actions that are tailored to respond to the use of chemical weapons. A political solution created by the Syrian people is the only way to ultimately end the violence in Syria, and Secretary Kerry is leading international efforts to help the parties in Syria move towards a negotiated transition. We are also committed to doing more to assist the Syrian opposition. But Assad must be held accountable for using these weapons in defiance of the international community.

There are always risks in taking action, but there are also risks with inaction. The Assad regime, under increasing pressure by the Syrian opposition, could feel empowered to carry out even more devastating chemical weapons attacks. Chemical weapons make no distinction between combatants and innocent civilians, and inflict the worst kind of indiscriminate suffering, as we have recently seen.

A refusal to act would undermine the credibility of America’s other security commitments – including the President’s commitment to prevent Iran from acquiring a nuclear weapon. The word of the United States must mean something. It is vital currency in foreign relations and international and allied commitments.

Every witness here today – Secretary Kerry, General Dempsey, and myself – has served in uniform, fought in war, and seen its ugly realities up close. We understand that a country faces few decisions as grave as using military force. We are not unaware of the costs and ravages of war. But we also understand that America must protect its people and its national interests. That is our highest responsibility.

All of us who have the privilege and responsibility of serving this great nation owe the American people, and especially those wearing the uniform of our country, a vigorous debate on how America should respond to the horrific chemical weapons attack in Syria. I know everyone on this committee agrees, and takes their responsibility of office just as seriously as the President and everyone at this table.