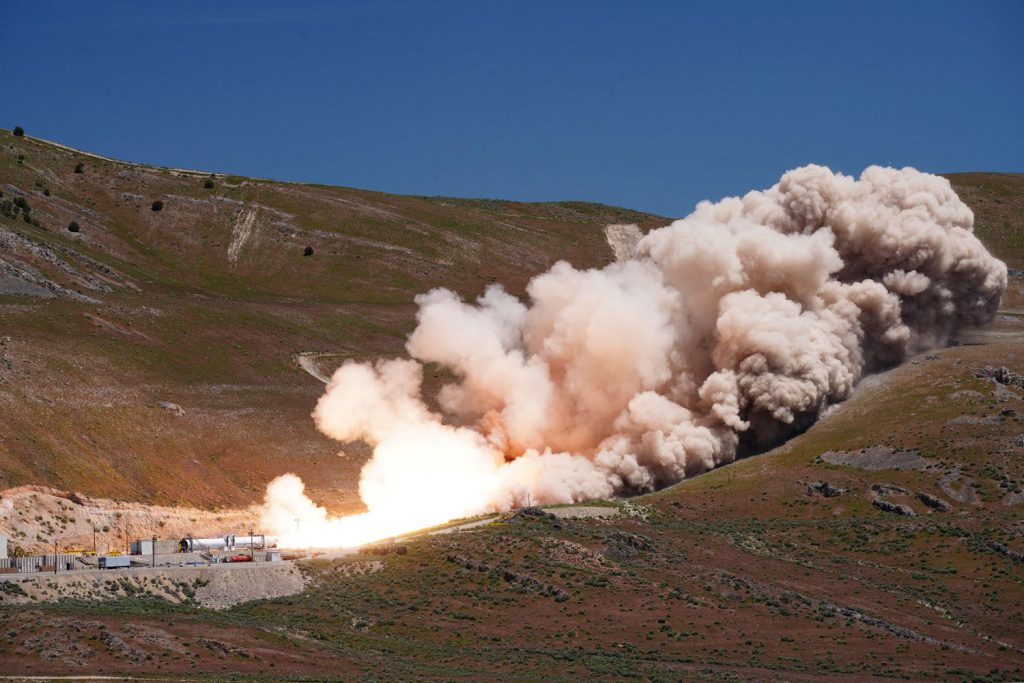 Northrop Grumman May 30, 2019 static fire test of its OmegA rocket

WASHINGTON: Northrop Grumman’s OmegA rocket successfully completed its first static fire test yesterday, despite an anomaly right at the end of the engine firing. The success keeps the program on the path towards a 2021 first launch, and gives the company a crack at the Air Force’s hotly contested national security launch program.

The test verified the performance of the motor’s ballistics, insulation and joints as well as control of the nozzle position, according to the company.

The hiccup at the end involved the exit cone, that seemed to have caught fire. Rominger told reporters at a video press conference after the test: “At the very end when the engine was tailing off, we observed the exit cone and maybe a portion of it doing something a little strange that we need to go further look into.” The company, he said, will investigate.

Northrop Grumman is one of four launch companies vying for the Air Force’s National Security Space Launch  Phase 2 contract, along with United Launch Alliance (ULA), SpaceX, and Blue Origin. The competition to replace the long-standing Evolved Expendable Launch Vehicle program is fierce and has been plagued by controversy — including contractor complaints about the fairness of the process as well as congressional intervention — almost since its beginning.

In the latest kerfuffle, SpaceX last week sued the Air Force over its decision in October 2018 to provide Launch Service Agreements, worth a total of $2.3 billion, to ULA, Northrop Grumman and Blue Origin. All three are building new rockets (ULA’s Vulcan Centaur , the OmegA, and Blue Origin’s New Glenn). SpaceX, on the other hand, is offering its already flying Falcon 9. Even though SpaceX did not win a Launch Service Agreement, it is still eligible to compete for the Phase 2 contract — which President Gwynne Shotwell has said the company intends to do.

The next potential hurdle will be the House Armed Services Committee markup of the fiscal 2020 National Defense Authorization Act (NDAA) — subcommittees begin the process next Tuesday. Chairman Adam Smith  wrote in March to then-Air Force Secretary Heather Wilson pressuring the service to delay the competition. The letter suggested that he might use the NDAA to force the Air Force’s hand. The Air Force, went forward with the formal request for proposals anyway. So, there may be another shoe to drop.

Under that May 3 request, the competitors have until Aug. 1 to submit their bids for the contract, which will include up to 34 DoD and Intelligence Community missions between 2022 and 2026. Under the contract, two firms will split the planned launches 60/40.The losers will therefore be out of the national security launch market until 2027.