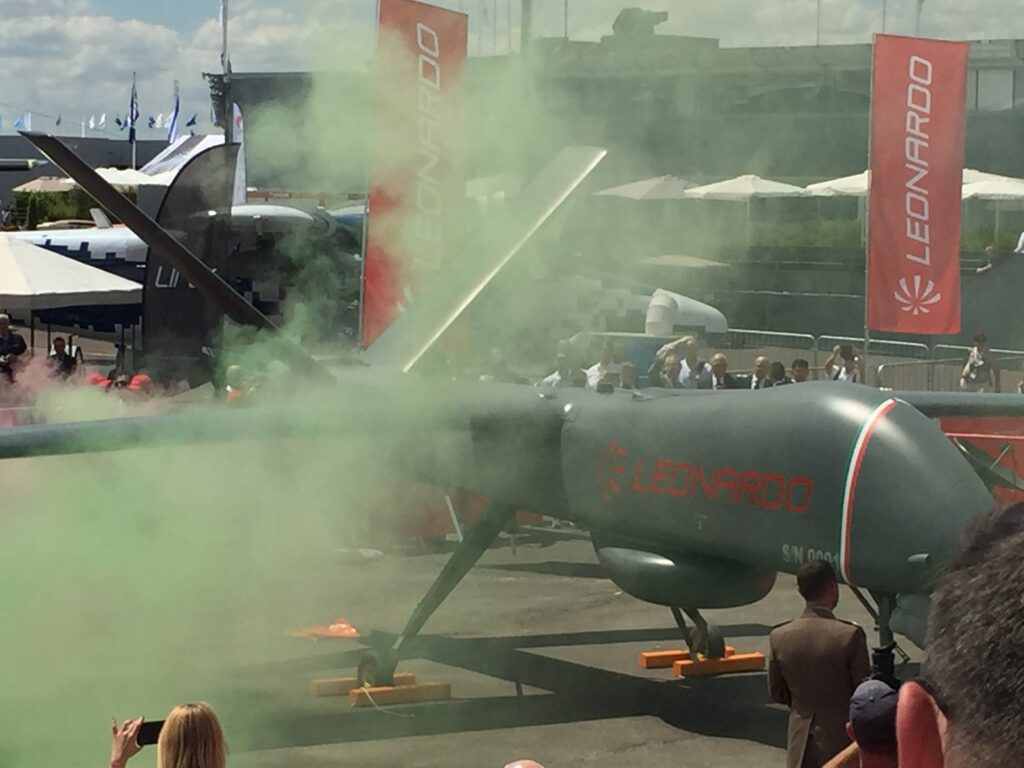 Fabrizio Boggiani, senior vice president of airborne marketing, told reporters here today that he sees “significant opportunities” for expanding the company’s market share via selling individual mission packages to international institutions, such as the United Nations, and countries who don’t “want to buy and own the asset, but want us to fly where they ask us to fly.”

Further, he noted that the Falco Xplorer, like the company’s current UAVs, is dual-use — with plenty of room for specialized sensors required by intelligence users. Boggiani added that the company has no plans to consider an armed version of the Falco drone line.

Leonardo’s current UAV model, the Falco EVO, was chosen by the European Union in December 2018 to demonstrate the possible use of medium-altitude long-endurance UAVs for maritime border surveillance under a similar service contract. The EU’s Frontex program contracted 300 flying hours, with the possibility of extending the contract. As long ago as 2013, the UN contracted Leonardo’s smaller UAV, the Selex EX Falco, for support of peacekeeping missions in Congo.

The Falco Xplorer is the largest in the UAV family to date, with a maximum take off weight of 13 metric tonnes and a payload capacity of up to 350 kilograms. It can fly for up to 24 hours at 24,000 feet, Boggiani said. He noted that Leonardo controls provision of all subsystems, meaning “we are a one-stop shop” — thus providing supply chain security.

He also stressed that the Falco Xplorer is “totally ITAR free” — meaning that its sales are not limited by US export control rules embodied in the International Traffic in Arms Regulations. The new UAV falls into Class 2 of the 1987 Missile Technology Control Regime (MTCR) (that limits exports of systems that can deliver a payload weighing 500 kilograms to a target 300 kilometers away), which means it can be exported anywhere in the world, Boggiani explained.

The company expects to start flight tests in the next two weeks, complete its certification with the Italian government by the end of the year and to begin production in 2020. Boggiani said Leonardo is already “talking with some customers.”

The unveiling ceremony was officiated by Italian Prime Minister Giuseppe Conte, indicating the importance of the company to Italy’s export portfolio. According to the company’s website, Leonardo’s revenues last year were about 12.2 billion Euro ($13.7 billion), with 85 percent of its sales to international customers. Indeed, its US unit, Leonardo DRS, has a sizable footprint especially in regard to Army programs. For example, teaming with Israeli firm Rafael, Leonardo DRS is a key contender for upgrading US Army armored vehicles with new missile defense systems. It also recently won a contract extending its relationship with Special Operations Command for provision of commercial satellite communications terminals.