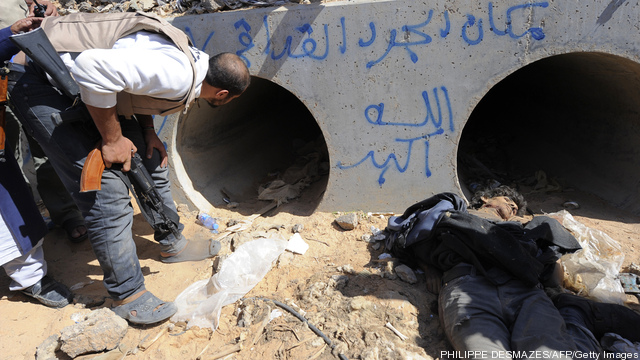 With news of Muammar Gaddhafi’s death, the U.S., NATO, and the Libyan National Transitional Council (NTC) deserve a moment to relish in the successes of the democratic movement in Libya. Yet it’s important to understand that despite this success, the story of Libyan democracy is in its infancy. Now begins the difficult part.

Can the NTC establish rule of law, democratic institutions, security, a stable economy, and a functioning government for the whole of Libya? This is traditionally the most difficult part of any revolution.


At this point, it’s wise to step back for a moment and reflect upon some of the lessons learned, and how those lessons can help guide future U.S. or NATO involvement in future scenarios of intervention.
In Libya, significant factions of the military switched to the rebel side, rapidly trained citizen-soldiers to a rudimentary level, and exercised air superiority via NATO. Without this capability, the democratic uprising would have been mercilessly crushed.

In Egypt, the military remained “neutral” during the revolutionary fervor. By refusing to open fire on protesters, the military’s decision led directly to the ouster of Hosni Mubarak. In Tunisia, the Chief of the Army refused direct orders to shoot protesters, and the army withdrew from defensive positions in the capital.

In contrast, Bashar al-Assad has maintained his monopoly of force in Syria, brutally stamping out pockets of protesters. The 2009 Iranian Green Revolution, essentially a forerunner of the Arab Spring, also fell apart at the hands of a regime unfettered by the moral challenges of crushing unarmed protests.

It is ultimately up to the affected people to carry their own revolution and put the value of their lives behind it. This creates an authentic desire to preserve what they have achieved, because they have done so not only with their own hands, but with their own blood. The U.S. should not risk tainting a democratic movement by giving it the appearance of a foreign-flavored imposition.
Since the passing of that resolution, NATO pursued an unstated policy of regime change through manipulating the resolution’s authorization to protect civilians, essentially designating Gaddafi himself as a de facto military threat to civilians. NATO systematically dismantled Gaddafi’s defenses, destroyed his air force and armored units, and leveled the playing field to remove all of the Libyan military’s advantages.

But due to this deliberate manipulation of the U.N. resolution by NATO, it is more likely that China or Russia will exercise veto power should a similar situation arise in the future.

Giving people weapons is easy, but taking them away is not. There are going to be some serious issues in disarming this heavily armed population and reducing the risk of an explosion of post-Gaddafi violence. Witnessing the excessive amounts of reckless celebratory gunfire after the fall of Tripoli shows an undisciplined, poorly-trained force of heavily armed people that are probably in no hurry to give up their new toys.

There must be viable options made to the rebel forces, whether that’s integrating them into a properly organized, trained, and professional military, or some sort of collection and accounting of weapons as people return to their normal lives. The international community bears a great responsibility in assisting the NTC with this process.

What will ultimately happen in Libya is anybody’s guess at this point. What can happen in Libya is subject to both the desire of the Libyan people, and the willingness of NATO and the world to assist them in this process as they see fit. While these lessons are not exhaustive, they are important to keep in mind for future conflicts, and as the current story continues to unfold.
Matt Wallin works for the American Security Project, a non-partisan think tank in Washington
@CategoryFeature @MainPageFeature allies france Libya manpads NATO