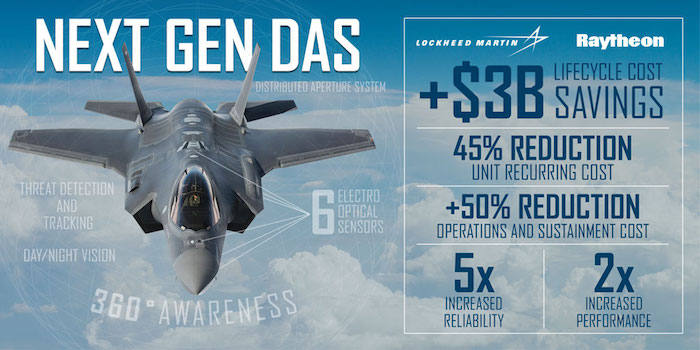 WASHINGTON: Northrop Grumman was pushed aside today by Lockheed Martin as it picked Raytheon to build perhaps the F-35’s most important sensor, the Distributed Aperture System.

“It’s a major upset,:” Richard Aboulafia of the Teal Group said when I asked him to discuss the signficance of the decision. “And from a revenue standpoint, F-35 remains almost the only game in town. It also shows that they’re determined to reduce F-35 costs. Major component changes like these are extremely rare, particularly at this stage of a procurement program.”

Northrop Grumman’s system, long touted as a revolutionary capability allowing pilots to see all around their aircraft, top to bottom, front to back and giving the F-35 the power to detect missile launches from as much as 1,000 miles away (the standard official number is 800), as well as allowing the plane to target ground artillery, has had problems for years. The 2015 report by the director of Operational Test and Evaluation said this: “The F-35B fleet exhibited only a 14 percent average FMC rate, however. Failures in the Distributed Aperture System (DAS), electronic warfare (EW) system, and Electro-Optical Targeting System (EOTS) were the highest drivers pushing aircraft into Partial Mission Capable (PMC) status.” The OTE usually lists problems in their order of importance. And Lockheed made a point of saying in today’s announcement that the Raytheon system will provide five times the reliability of Northrop’s product.

The Raytheon win should mean “billions” in revenue for the company, according to Loren Thompson, a defense consultant and member of the Breaking Defense Board of Contributors.

“The DAS win will be worth billions of dollars to Raytheon across the lifetime of the F-35 fighter program. The shift in suppliers is part of a broader push by Lockheed Martin to wring cost out of the program,” he notes. “With most of the technical risk now retired from the program, cost reduction has become a top priority for managers.”

Lockheed signaled its dissatisfaction with Northrop at the Singapore Air Show in April when Lockheed’s director of F-35 international business development, Steve Over, told Aviation Week: “We’ve found a supplier that can produce a better DAS system at a significantly lower price that has significantly better performance. So, we’re trying to find a way to break that into production right now. It’s somebody other than Northrop.”

The Raytheon-built DAS will be integrated into F-35 aircraft starting with Lot 15 aircraft, expected to begin deliveries in 2023.

Northrop, which had supplied about 35 percent of the F-35, will remain a major supplier since it builds the center fuselage and the plane’s Active Electronically Scanned (AESA) radar.