Marines Are Flying Only 60% of F-18 Hornets They Need 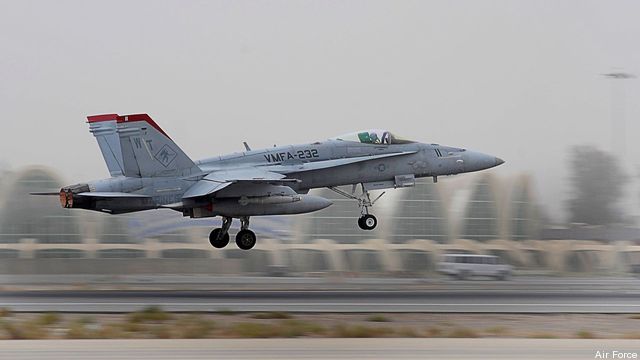 CAPITOL HILL: Chronic maintenance problems with the aging F-18 Hornet are hobbling the Marines, leaving them with less than 60 percent of the strike fighters they need to conduct training and operations, the deputy commandant for aviation told the Senate this afternoon.

“I pulled up our readiness data just yesterday,” Lt. Gen. Jon Davis told the seapower subcommittee of the Senate Armed Services Committee. “We have 87 aircraft that were mission capable. Out of those 87 airplanes, I put 30 airplanes in the training squadron and 40 airplanes deployed forward. There’s not a lot left for the [remaining] units to train with.” 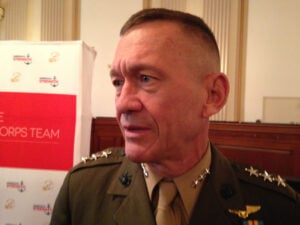 How many Hornets should the Marine Corps have ready to go? Under the current, shrunken force structure, 150: a training squadron of 30 and 12 combat squadrons of 10 aircraft each. Until 18 months ago, that figure was 174 — 30 training aircraft and 12 squadrons of 12 aircraft each — but the Marines decided to shrink each squadron to reflect the reality of insufficient aircraft.

The Marines fully equip each squadron that deploys abroad. They have also zealously kept their training squadron at full strength, to avoid “eating their seed corn” by reducing the number of new pilots. But among combat squadrons, if you’re not currently deployed or about to go, you’re going to be painfully short on airplanes — which means you’re going to be short on training time.

“We don’t have the airplanes to go fly all the pilots to their [required] training readiness manual numbers,” Davis said. Priority goes to making sure every pilot is safe to fly, he said, but there’s very little time left for “tactical proficiency.” As a result, pilots get out of practice between deployments, only to cram in flying hours as their squadron gets ready to go.

“You should not have to wait until right before deployment to get yourself up to speed,” Davis said, but that’s the current reality. Worse, if there were a war or other sudden crisis that required unplanned deployments, many units would be poorly prepared. 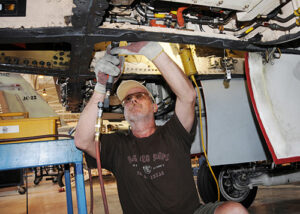 The underlying problem is the age of the corps’ air fleet. Last year, Davis said that 19 percent of Marine planes and helicopters — 159 aircraft — were out of action “long-term” for maintenance reasons. The issue’s particularly acute with the Hornets, which are early F-18A, B, C, and D models bought in the 1990s and flown hard ever since. Some spare parts are out of production: One maintenance team actually tried pulling components off a museum aircraft; when that didn’t work, the Marines ended up replicating the part on a 3D printer.

By contrast, the Navy kept buying Hornets: The fleet currently has more of the much-upgraded and much newer F/A-18E/F “Super Hornet” model than of F-18A/B/C/D “legacy Hornets.” Boeing’s Saint Louis factory is finally facing the potential end of Super Hornet production, but there’s a good chance of additional sales either to the Navy or Kuwait. A long-awaited study of electronic warfare by the Office of the Secretary of Defense may also direct the purchase of more EA-18G Growlers, the airborne jammer variant of the Hornet, when it comes out later this year.

Ultimately, the Marine Corps wants to replace its aging fighters — both Hornets as and AV-8B Harriers — with the new F-35B Joint Strike Fighter. The first two squadrons of F-35Bs are in operation, but new planes aren’t entering service fast enough to replace geriatric fighters. Until they do, Marine pilots’ readiness for battle is going to suffer.