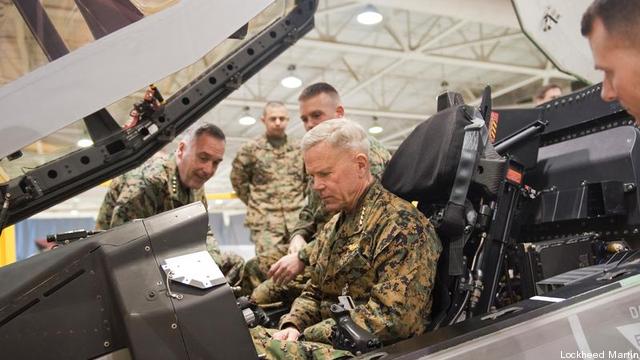 The big Marine Corps news of the last 24 hours was the award of development contracts to three firms, Lockheed Martin, AM General, and Oshkosh, to work on the Joint Light Tactical Vehicle to replace Army and Marine Humvees. The Marines nearly backed out of the program in 2011 over cost concerns. While the Marines are committed to the JLTV today, they are buying far fewer than once hoped.

When the JLTV program was first conceived, said Gen. Amos, “we were going to replace all our Humvees,” about 23,000 vehicles: “We can’t afford that.” What’s more, as the service reorients from Afghanistan — where the improvised explosive device threat has pushed the military to heavier, better-armored vehicles — to Asia — where the crucial challenge is fitting equipment onto ships to traverse vast distances — “in the Pacific maybe Humvees turn out to be pretty good,” Amos added, or at least “good enough.”

“It’s 5,000 to begin with,” he emphasized. “We build the first 5,000, and then the Army comes in behind us,” with a production run now planned at 50,000. It’s entirely possible that, as the Army buy winds down, the Marines may start a second JLTV purchase, perhaps of an improved version, “on the back side of the Army,” Amos said. “We’ll know a lot more five years from now.”

Almost as important as how many vehicles the Marine Corps buys is when it buys them, Amos added. The Marines must carefully sequence its Humvee replacement program, the JLTV, with its programs to replace its aging amphibious troop carriers. Originally both bills were coming due at the same time, creating an unaffordable spike in procurement spending: “It became a huge mountain… We just couldn’t get there because of cost,” Amos said. Now, “we’ve actually spread this out.”

The Marines rebooted their amphibious troop carrier program after then-Defense Secretary Robert Gates cancelled the Expeditionary Fighting Vehicle, a hybrid speedboat-tank, in 2011. A less technologically ambitious Amphibious Combat Vehicle is now in development. This ACV should be ready to enter production just as the Corps finishes buying its 5,000 JLTVs.

A Pentagon “analysis of alternatives” on what the ACV should be was finished this summer but hasn’t been made public, Amos said. “We ‘re going back in again just to double-check these requirements,” he said, to make absolutely sure the ACV avoids the technological overstretch and consequent excessive cost of the cancelled ECV. “We’re going to get one opportunity to do this right,” he said. “So I want to make sure when we go to Congress with the requirement that Congress looks at it and says, okay.” Amos expected the Marines to put out a request for proposals on the ACV this fall.

Once ACV production is done, the Corps will start buying a yet-undefined Marine Personnel Carrier, which will be cheaper than the Amphibious Combat Vehicle because it will be a pure ground transport without the ability to swim. (MPC will likely be a six- or eight-wheeled armored vehicle similar to the Army’s Stryker). The Marines simply cannot afford enough amphibious vehicles for their entire force, Amos explained, so they will buy a mixture of ACVs and MPCs instead. The Corps will also keep (and upgrade) some of its existing amphibious vehicles for many years to come.

The Marines have to balance all these surface vehicle acquisitions with their version of the Joint Strike Fighter, the F-35B. Amos expressed his confidence that the technologically ambitious jet, which can take off and land vertically, has worked through its problems of the past year. “I’m probably not as much as engaged with the JPO [Joint Program Office] as I was last year; last year I felt I needed to be more hands on,” he said. For one thing, the plane’s lost weight, a major performance consideration. “[Last year], we had like 140 pounds of margin,” Amos said. “We’re well over 300 pounds now… you do that one pound at a time.” Just removing excess caulking from the fuel cells, a seemingly trivial detail, saved over 30 pounds, he said.

Now the F-35B is meeting or ahead of schedule on its test program, Amos said, and the Corps plans to stand up its first squadron this November, in Yuma, Arizona. There’s no firm date when that squadron will be ready for combat, which would mark the F-35B’s official “initial operational capability.”

Amos squelched speculation that the Marines might want to develop a further F-35 variant specialized in electronic warfare (EW) to replace the aging EA-6B Prowler. “The F-35B by itself is a significant EW platform,” said Amos. “You’re going to get a marked amount of the current capabilities that you’re currently flying on the EA-6B Prowler…. I don’t see that there’s a need right now to [start] another program and pile that cost on top.”

Finally, the Marines must shed 20,000 personnel as they shrink from 202,000 to 182,000, and they do that while drawing down in Afghanistan and building up in the Pacific. The Marine presence in Okinawa will actually decrease, from today’s roughly 14,000 to about 10,000, but overall forces will increase in Guam; Iwakuni, Japan; and Darwin, Australia.