More B-21s Likely; B-1s To Carry Up To 8 Hypersonic Weapons

AFA 2019: The United States will probably need substantially more B-21 bombers than the 100 it currently plans to buy. He didn’t say it that way, but that’s the only conclusion one can reach after listening to the head of Air Force Global Strike, Gen. Timothy Ray, here.

The U.S. has 156 bombers today. But the Air Force is committed to boasting 386 squadrons, up 75 from its total today. “Certainly,” Ray said, “that means good growth for the bombers.” He cited outside studies that conclude the Air Force needs 225 bombers. The current official benchmark, set by the bomber roadmap, is for 75 B-52s and 100 of the new B-21s bombers being built by Northrop Grumman. So 225 would mean another 50 bombers.

As we reported last year, the math for more bomber squadrons was that there would probably need to be an additional 75 B-21 bombers bought to boost the Air Force bomber squadrons by 2030, 25 more than the estimates in the outside studies Ray mentioned. 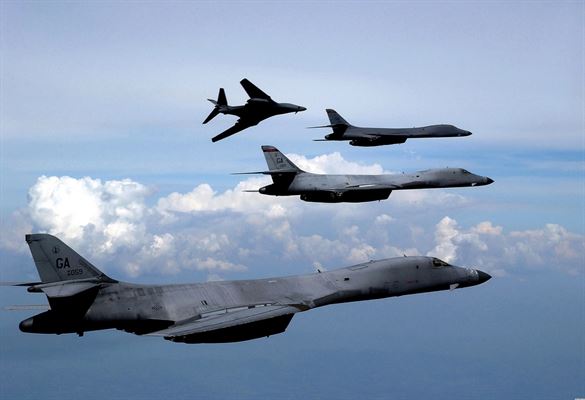 And only the United States flies or builds bombers among its allies and partners, Ray noted. The last foreign squadron retired in 1984, he said.

We still fly B-2s for nuclear missions and the B-1 for conventional missions (it almost literally flown its wings off executing Close Air Support and other bombing missions in Afghanistan, Iraq and Syria.)

In the large allied strike against Syrian targets in April last year, B-1 bombers launched 19 Joint Air-to-Surface Standoff Missiles (JASSM-ER). But by August of this year, data indicated the B-1 fleet faced serious problems and at one point only six bombers were ready for war.

Gen. Ray said things are looking up for the beautiful aircraft. “The depot level work required for the structures is not as extensive as we thought,” he said, adding that much work on aircraft deficiencies should be done by the end of next month.

For the longer term, the service plans to use the B-1s for different missions than it has spent most of the last 20 years executing. A rotary launcher will enable the aircraft to carry up to eight — and at least four — “large hypersonic weapons, Ray said.

Perhaps taking the lessons learned from the strikes against Syria, Ray told the conference yesterday afternoon that the plan is to “put a lot more JASSM-ERs externally on the hard points there.” And, for the venerable B-1s, Ray predicted a “pretty good flying season” over the next six to nine months.