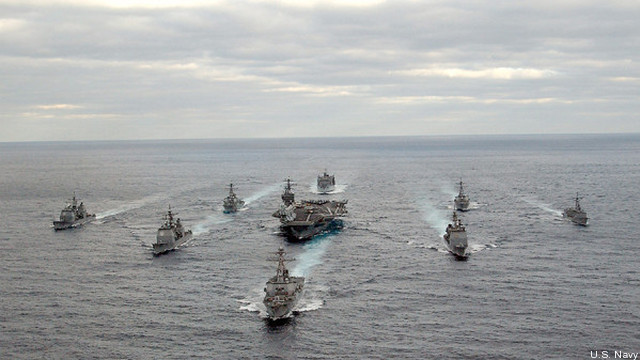 Congress vows to preserve the USS George Washington, seen here at the center of its battlegroup

Smooth sailing is not in the Navy’s forecast for the next year.The service faces big decisions on major programs, and we can expect clashes between Navy plans, congressional politics and budgetary realities on three of the biggest: the upgunned Littoral Combat Ship, the UCLASS armed drone, and the jewel in the Navy’s crown, the nuclear aircraft carrier.

The fate of all three programs — and countless others — is tied up with the looming budget cuts known as sequestration. But this isn’t just another sequestration story. Each program carries its own unique controversies that may doom it regardless of whether the sequester is solved.

For the Littoral Combat Ship (LCS) and the Unmanned Carrier-Launched Airborne Surveillance and Strike (UCLASS) drone in particular, the debate is less about funding than about warfighting, and ultimately about the odds of war with China. Congress, especially House Republicans, want weapons built first and foremost to survive and win a high-end fight in the West Pacific — or better yet to deter one altogether. The Navy, backed by the Obama administration, has proposed more modest capabilities and lower costs for a wider range of missions. 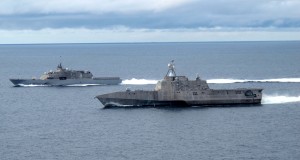 The Littoral Combat Ship has been controversial since its conception in the 1990s as a cheap and ultimately expendable “Streetfighter.” Both the LCS variants now in actual production are much bigger and more robust than the Streetfighter concept. They’re also built to much tougher standards than the original designs for LCS itself (a change which required redoing the first two ships halfway through construction at great expense). But critics in and out of government still charged that LCS was both too fragile and under-gunned to survive against high-end Chinese-style threats. The crescendo of criticism built until this spring, when Defense Secretary Chuck Hagel decreed that production of the current designs would stop after 32 ships — out of a planned 52 — and that the remaining 20 “small surface combatants” the Navy required be would be something tougher and more warlike.

On Dec. 11th, Hagel approved that new ship: It’s essentially an upgunned LCS with better weapons, a tougher hull, and a higher cost. Rather than the jack-of-many trades philosophy of the original LCS, which is meant to take on missions from counter-piracy to minesweeping depending on the specific “mission module” installed, the new LCS also gives up the counter-mine mission to focus on fighting enemy surface vessels and submarines. But LCS remains a small support ship unsuited for an all-out naval battle. So not only does the Navy still have to thrash out countless details of the new and improved design, it also has to convince a skeptical Congress that it’s improved enough. 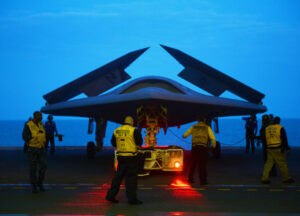 The Navy’s UCAS demonstrator aboard ship. Its proposed successor is called UCLASS.

The UCLASS drone doesn’t have the Littoral Combat Ship’s long, contentious history. In fact, its requirements haven’t even been set yet — but that’s precisely where the controversy lies. The Navy primarily wants a long-range, long-endurance scout drone to serve as the eyes of the aircraft carrier, with some capability to strike targets. Critics argue UCLASS should be an unmanned stealth attack aircraft, built to break through the multi-layered “anti-access/area denial” (A2/AD) defenses of a country like China and hammer targets well inland. The critics have gotten sufficient traction both in Congress and in the Office of the Secretary of Defense that the official release of a Request For Proposals has been repeatedly delayed. The Navy’s more modest vision may well die inside the Pentagon. If it survives and is included in the 2015 budget plan, it will get a grilling on Capitol Hill.

People care about UCLASS so intensely because they see it as crucial to the aircraft carriers which will launch it. Those thousand-foot-long warships are the biggest of America’s big sticks, and their future inspires real passion. The most basic issue is how many the US will have. The Reagan build-up aimed at 15; the current strategy calls for 11; and for two years, since the retirement of the half-century-old USS Enterprise, the Navy has had to make do with 10. The fleet’s supposed to go back up to 11 when the new (and costly) USS Ford is delivered in 2016. But that goal requires keeping all of the remaining 10 in service, an expensive proposition — especially when it comes to the George Washington (CVN-73), now 25 years old and ready for its mid-life overhaul. 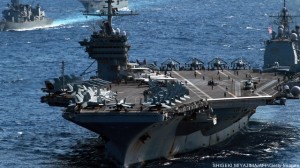 The “Cromnibus” spending bill finally added $483.6 million to refuel the Washington. Refueling a nuclear-powered carrier after 25 years of service lets it keep operating for another 25, so there’s a high return on investment. But there’s also a high cost to simply keeping the carrier in service, from maintenance to fuel to its associated air wing. So the administration has repeatedly said it doesn’t want to commit to keeping Washington in service if sequestration is going to come back.

The Pentagon’s top cost estimator, Jamie Morin, reiterated this stance in mid-December at the Center for Strategic and International Studies. If the refueling starts and then sequestration hits, said Morin, director of the powerful Cost and Program Evaluation (CAPE) office, “how do we extricate ourselves from the refueling of one of the Nimitz-class carriers? [i.e. Washington] We’re going to have to figure out a way to extricate ourselves.” 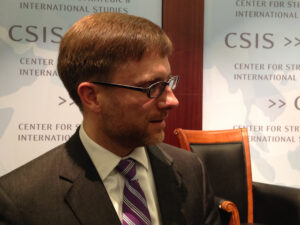 “This will be enormously painful and inefficient, but the 10-year projections clearly show we don’t have the resources to retain that structure,” Morin went on. “If we return to sequestration-level budgets in 2016 and beyond…we could afford probably only to have 10 as opposed to 11.”

But Congress’s bitter opposition to retiring a carrier suggests the fleet will stay at 11, no matter what. So the big question isn’t whether the Hill will vote the money: it’s where. If there’s a larger deal on sequestration, both Congress and White House can agree some of the extra money should go to an 11-carrier fleet. If the cuts take full effect, however, the only way to save the Washington will be at the expense of something else.