Navy Fleet Will Not Grow for 5 Years: CNO 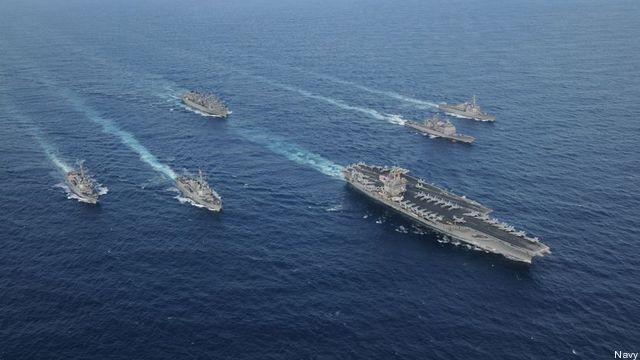 ABOARD THE USS WASP: Putting the best face on a potentially grim future, the Navy’s top officer is telling his sailors that the active fleet will be about the same size in five years as it is now, despite recently announced plans to retire a bunch of ships early and to not build as many new ones as planned.

Adm. Jonathan Greenert, Chief of Naval Operations, told sailors and Marines here that the number of ships in the fleet in 2017 “will be about the same, 285, but it won’t be going up as high as we wanted.”

The Navy has planned for at least 313 ships in the battle fleet for years, and has counted on rapid procurement of the Littoral Combat Ships (LCS) and serial production of the Arleigh Burke destroyers and Virginia-class attack submarines to help reach that number.

But in his preview of the fiscal year 2013 budget, Defense Secretary Leon Panetta said the Navy will retire seven Ticonderoga-classcruisers and two amphibious ships earlier than planned, would remove two LCS and eight Joint High Speed Vessels from the five-year defense budget plan and delay other ship construction starts.

Asked during a brief meeting with reporters how he expected to sustain the current 285-ship fleet with those changes, Greenert acknowledged the obvious that ships retired early are gone, but said ships removed from future construction plans are not an immediate loss.

“We have a lot of ships in the ship construction plan and they will be delivered over time. So the fleet will look about the same in 2017 in actual numbers as today,” he said.

But the Navy’s latest 30-year shipbuilding plan, released before the new budget numbers, predicted the fleet would be at 301 ships by 2017.

Greenert, who visited Wasp during the Bold Alligator amphibious exercise off the coast of North Carolina, also was asked about how the Navy and Marine Corps could carry out their renewed emphasis in amphibious operations when the “Gator” fleet will be dropping below the 33 ships considered the minimum requirement.

Looking beyond the current five-year plan, Greenert said he and Gen. James Amos, the Marine Corps commandant, “will look at innovative ways to deploy Marines.” He mentioned using the LCS, the new Mobile Landing Platforms and possibly other ship types.

The Marines have been seeking an LCS mission package that would support a small Marine force for some missions, but the Navy has been reluctant to go beyond the currently planned anti-mine, anti-submarine warfare and surface warfare packages, which have been delayed repeatedly during development.

Greenert spent most of his time on Wasp talking with enlisted sailors and Marines and did not meet with four Republican congressmen who also visited the flag ship during Bold Alligator, the biggest and most complex amphibious exercise since before the 9-11 terrorists attacks.

The delegation was led by House Armed Services Chairman Buck McKeon and included Rob Wittman and Scott Rigell, both HASC members from Virginia, and Jack Kingston, a GOP member of the House Appropriations Defense panel.

The pro-defense lawmakers touted the value of a strong Navy – a large part of which is based at Norfolk, in or near Wittman’s and Rigell’s districts — and the value of Navy-Marine amphibious capabilities, which would use those Norfolk-based ships. Expect congressional resistance to the Navy’s smaller force structure. How much is difficult to predict, given the upcoming elections and the nation’s fiscal dilemma.