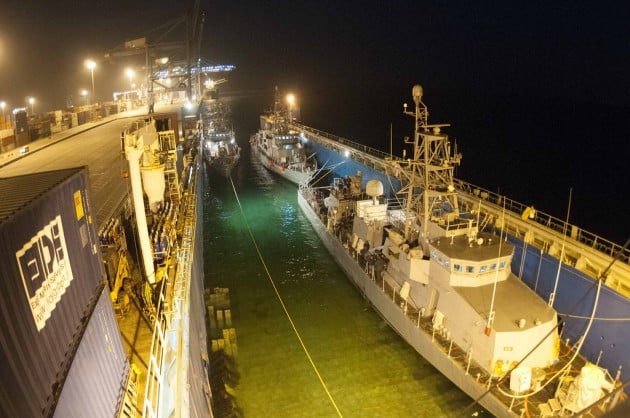 Once again, the US Navy is moving more warships to the Persian Gulf. This time, though, we’re not sending an extra aircraft carrier or another task force. This is arguably a de-escalation of possible tensions with Iran. In a nutshell, the Navy is replacing big ships with small ones.

The three new ships – Tempest, Squall, and Thunderbolt – are Cyclone-class PCs, which stands not for “personal computer” or “politically correct” but “patrol, coastal.” They are relatively small vessels – 179 feet long, 380 tons displacement, and boasting just 28 crew. They are well-suited to shallow waters, protecting oil rigs, and working with our Arab allies’ modest fleets. Another two PCs, Hurricane and Monsoon, will join the Bahrain-based 5th Fleet next year, leaving just three in US home waters to do (primarily) counter-drug operations for 4th Fleet out of Mayport, Florida. Meanwhile, however, the Navy’s cutting back on aircraft carriers, destroyers, and even minesweepers on duty in the Gulf.

That’s not to say the Cyclones can’t fight. In fact, the five already homeported in Bahrain are being upgunned with Raytheon-made Griffin missiles, the same relatively short-ranged weapon being added to the controversial Littoral Combat Ships. (The newly arriving PCs will get their Griffins later). Last year, the Navy just happens to have successfully tested the Griffin against small fast-attack craft, the favored watergoing weapon of the Iranian Revolutionary Guard Corps.

“We’re just installing the Griffin missile system on the patrol craft now. That’s a laser-guided rocket that will help counter any kind of swarm tactic,” said Capt. Joseph Naman, commander of 5th Fleet’s coastal patrol craft, in a conference call this morning with reporters. “I would take the PC over a swarm [of fast-attack boats]. Pound for pound the punch is much harder.”

Loading up small craft with heavy machineguns and rocket-propelled grenades is a cheap way to put firepower on the water, but they may not hit much of anything. “The speedboats with the guns and the guys hanging off with RPGs, all those [weapons] are unguided, all those are not stabilized,” Naman explained. In the Gulf, “we’re normally seeing about one to three-foot [waves] on a good day and maybe five to seven-foot seas on some of the interesting days we have.” That’s bad news for the Revolutionary Guard gunner trying to eyeball his target from a jouncing deck. By contrast, even before the Griffins are installed, the Cyclones have two 25-milimeter quick-firing cannon and a multitude of machineguns, all on stabilized mounts to keep them on target in rough seas. 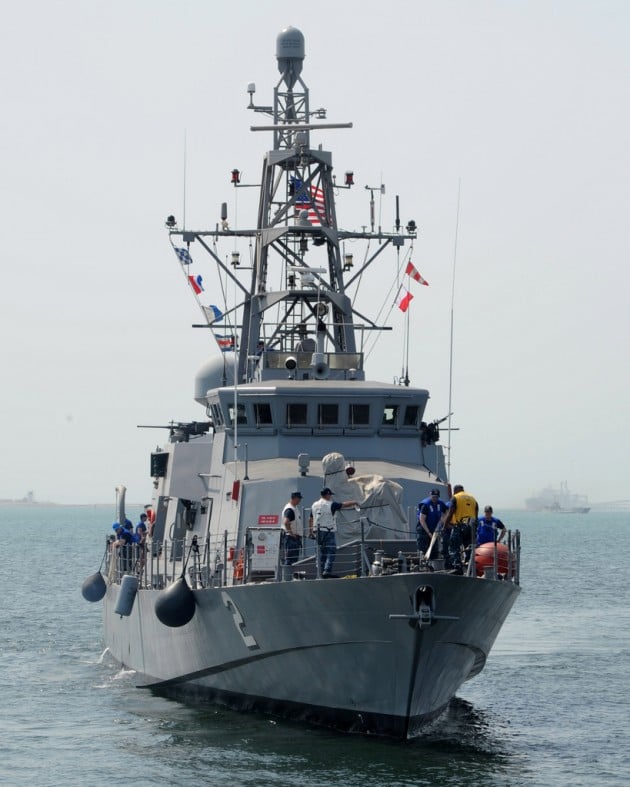 The coastal patrol craft USS Tempest in the Persian Gulf.

That’s still a lot less firepower than the bigger and more-expensive-to-operate warships that the Cyclones are effectively replacing. This spring, the Pentagon announced the Navy would halve the number of aircraft carriers patrolling the Persian Gulf at any given time from two to one – which also cuts in half the accompanying cruisers, destroyers, and submarines – because it simply could not afford to sortie the carrier strike groups under the budget cuts known as sequestration. (The uncertainty over a stopgap spending measure called the Continuing Resolution, since resolved, was also a major factor).

The Navy’s also cutting back on patrols by its workhorse Arleigh Burke DDG-51 destroyers, Capt. Naman said. “The slight decline in DDGs closely correlates to our decline in forces in Iraq and our drawdown in Afghanistan,” he told reporters. To support the wars on land, the fleet has been making longer and more frequent deployments over the last decade, to the point that both ships and their crews are getting tired. Now, said Naman, “we’re trying to stretch [out] the time between deployments a little bit longer so we can do the maintenance on the ships we need to.” (But sequester complicates maintenance as well).

“It doen’t mean we’re going to do away with the DDGs,” Naman emphasized. But as the patrol craft flotilla increases from five historically to eight now and 10 next year, he said, “we’re picking up a lot of the missions they were doing.” 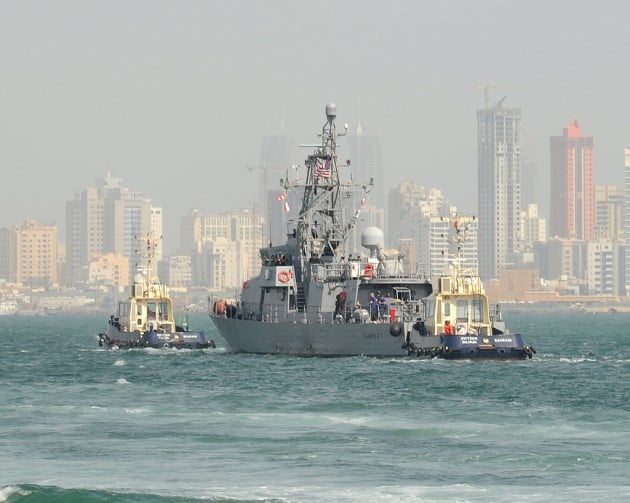 Most of those missions are low-profile cooperation with the Gulf Cooperation Council states – Bahrain, Kuwait, Oman, Qatar, the UAE, and the big brother, Saudi Arabia. Building up local partners is the best long-term bulwark against Iran, and those partners’ own fleets consist largely of smaller coastal craft much more similar to the Cyclones than to the Arleigh Burkes. Those international missions include training exercises – “there’re over 15 of them we do every year with the GCC nations,” said Naman – and protecting offshore or coastal installations such as the ports, oil rigs, and desalinization plants on which the region’s economy depends. In the shallow waters of the Gulf, small can be beautiful, Naman said: “We can go more places with the PC than we can with the DDG based on the draft alone.”

A mission the Cyclones can’t perform, however, is minesweeping. The Navy doubled the number of Avenger-class mine counter-measures (MCM) ships in the Gulf from four to eight last year amidst Iranian threats to close the Strait of Hormuz, but now it’s sending the extra four Avengers home again. “They made a conscious decision to bring additional MCMs over here temporarily,” said Naman. “It wasn’t a homeport shift; it was a deployment….We have moved some portion of those back; the remaining ones will go back this fall.”

In the long run, the mine-clearing mission will fall to the Littoral Combat Ship, which will also hunt submarines and Iranian-style small attack boats. (The LCS will have plug-and-play “mission modules” to tailor it for each of the three threats). While the Navy has made major progress on LCS’s costs, it’s still working out both tactics and technology for the highly unconventional new ships.

Both variants of the Littoral Combat Ship are also about eight times larger than a coastal patrol craft (3,000 tons displacement versus 380). So even in the future, the Navy will likely need both types for different missions in different depths of water. For now, until the LCS becomes fully operational, it’s up to the Cyclones to patrol the shallows.