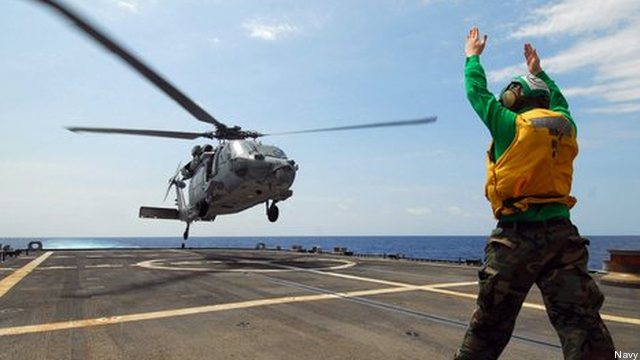 Officials at Naval Air Systems command were able to link up the Lockheed Martin-built MH-60 Sierra with Northrop Grumman’s Fire Scout unmanned drone during a series of operational evaluations held at Naval Air Station Pautuxent River last October, a Lockheed spokeswoman told Breaking Defense today. The Fire Scout drone was able to pass intelligence, surveillance and reconnaissance data and imagery from its onboard sensors to the MH-60 during the flight tests, according to the spokeswoman. That information was then successfully routed to the Navy’s Surface Aviation Interoperability Lab in Pax River. The manned-unmanned duo completed four test flights during the evaluation without incident, according to the spokeswoman.

The test data is being fed back into the Navy’s ongoing work to draft a concept of operations for this new manned-unmanned capability, the spokeswoman said. It is unclear whether Navy officials plan to test the MH-60 and Fire Scout team on the open seas. If adopted, this new capability could be the first step toward having Fire Scouts controlled by MH-60 aircrews.

Controlling Fire Scouts from Sea Hawks could end up expanding how far the unmanned drones could fly. The distance Fire Scouts can fly is limited by the range of their shipboard command and control system. Fly too far, and the unmanned aircraft loses connectivity with the ship. Stay inside that range and thousands of miles of open ocean are left unguarded. To date, Fire Scout can only be flown from control centers on board surface ships.

But if Fire Scouts can be controlled by Sea Hawks they should be able to fly wherever the helicopters fly without losing connectivity. That means more miles of ocean covered by U.S. forces. The move could also eliminate many of the command and control concerns about the Fire Scout, which is slated to become the first armed unmanned drone in the Navy’s arsenal.