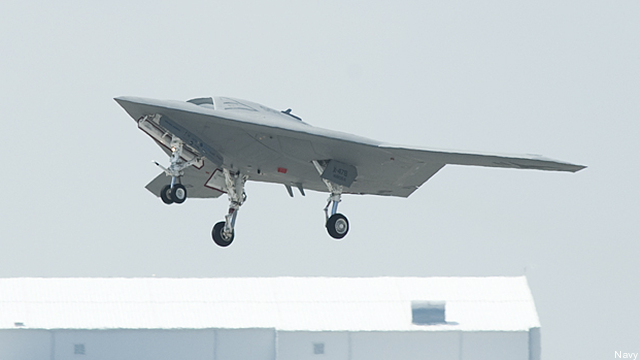 NAVAL AIR STATION PATUXENT RIVER: Landing a jet plane on an aircraft carrier is one of the hardest and most dangerous things a human being can do, with pilots’ stress levels spiking higher than in combat. Now the Navy is trying to teach a robot how to do it: The X-47B Unmanned Combat Air System, the UCAS.

“You have to think of every single contingency and work it into the software,” said Capt. Jaime Engdahl, the Navy’s UCAS program manager, at an event yesterday to roll out the X-47B for the press. The two UCAS aircraft, built by Northrop Grumman, have already gone through extensive testing at Edwards Air Force Base in California, but that was just landing and taking off from a conventional airstrip. Now both robot planes have moved out east to Patuxent River to work on “the basics of operating around the aircraft carrier,” Engdahl said.

UCAS isn’t doing any weapons testing yet; it has no bombs or reconnaissance cameras or other “mission systems” aboard: First it has to master taking off and landing in the most difficult environment in the world. That’s especially daunting when you consider that unmanned aircraft still have an uncomfortably high chance of a crash just trying to landing on an ordinary airfield. The Navy, like all the armed services, already makes heavy use of unmanned aircraft operating out of ground bases, and a robotic mini-helicopter called the Fire Scout has flown from Navy frigates, but no one has ever operated a full-up jet aircraft off an aircraft carrier. UCAS will be the first, in 2013. Now the Navy just has to get ready.

On Sunday, the UAS program made its first flight from “Pax River,” as it’s known in the Navy. An X-47 took off from the runway here and flew simple loops over the Chesapeake Bay in order to confirm that the unmanned aircraft could work with all the air traffic control systems here — which include a full suite of the equipment used at sea. “This is the actual hardware and software we have on the aircraft carrier,” said Cdr. Jeff Dodge of NASIF, the awkwardly named “Navy UCAS Aviation/Ship Integration Facility” here, which replicates a carrier’s control center. The X-47 was linked into NASIF’s simulated ship during Sunday’s test flight.

In fact, there are so many electronic systems emitting signals on a carrier that the UCAS had to go through two months of testing just to make sure there wasn’t accidental interference: It’s bad enough when your TV remote control accidentally opens your garage door, but that kind of mixed signals with a high-performance aircraft could get you killed.

The big challenge, though, is still to come: Pax River is one of only two places on land that replicates the complexity of operations on an aircraft carrier, boasting a mock deck complete with catapults for launch and arrestor cables to brake planes to a halt. Only when the Navy has proved the UCAS can handle this simulated “carrier” will they take the robot plane out to an actual ship.

Though the X-47 aircraft won’t go on a carrier until 2013, its computer brain has already taken a test drive: The Navy put UCAS hardware and software in the nose of an F-18 fighter, with a human pilot in the cockpit. The human then carefully ceded control and let the computer land the plane — under carefully controlled conditions and with the pilot always ready to retake control. That experiment didn’t test the specific aerodynamics of the X-47’s body, which is a strange flying-wing design with no tail, very different from the F-18. But it did give the X-47’s brain a workout in handling all the procedures and processes required to navigate the delicate and deadly dance of carrier landings.

It takes three years to train a human pilot to fly off carriers, Cdr. Dodge said; the NASIF facility has been working for five years to figure out how to teach a robot. “We had to break it down so there were no assumptions and everything was explicit,” he said. “You tell a pilot, ‘if you’re scared, go around’ — but what does that mean for a computer?”

What kind of performance does Dodge look for when his robotic student gets out to the ship? “We’re expecting as good as manned aircraft,” he said. But there are still some environments the Navy doesn’t expect the UCAS to master. While the aircraft is actually taxiing around the carrier deck, cluttered as it is with crewmembers and other aircraft, it will be under the direct control of a human operator walking nearby, driving it by remote like a kid with a radio-controlled car, to get “the centimeter accuracy that you need,” Dodge said.

The Navy doesn’t expect to get rid of manned aircraft any time soon. The UCAS itself is just a demonstrator, used to work out technologies and techniques. The next step is something called the UCLASS — Unmanned Carrier-Launched Surveillance and Strike — which will be an operational combat aircraft, tentatively set to enter service in 2019-2020. (The Navy has not yet put out a formal request for proposals). But even the UCLASS will operate off carriers alongside manned aircraft like the F-35 and the proposed future fighter, the F/A-XX.

There are some missions, particularly air-to-air combat, where many experts are deeply dubious that computer logic can catch up to human intuition. So human Top Guns will be flying Navy planes for decades to come. But alongside them will fly the robots.