New Romney ‘Panders To Center’ On National Security; Which ‘Opportunist’ Will You Support? 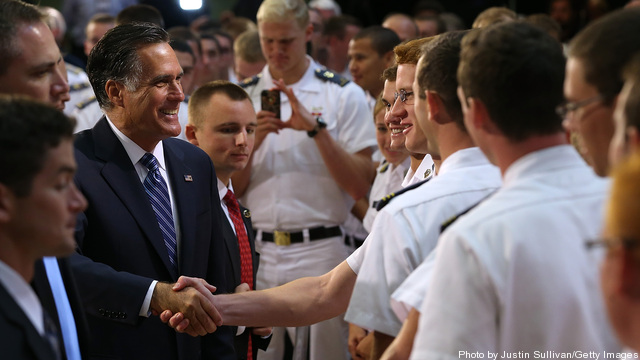 Mitt Romney’s “major” foreign policy speech at the Virginia Military Institute (VMI) last Monday appears to have thrown the American national security pundit class into confusion. Some, both from the right and the left, interpret the speech as proof, yet again, of Romney’s neo-conservatism-as reflected by the character of the vast majority of his own national security advisers.

Others-again from both sides of the political spectrum-argue that Romney is articulating warmed over Obama-ism with only a few mostly empty rhetorical criticisms.

There is a third possibility: Romney is doing what his staff told us he would do months ago; he is etch-a-sketching away the previous “severely conservative” candidate becoming his new pander to the center.

Just as Romney befuddled President Obama in their first nationally televised debate and presented the president with an unexpected persona on taxes and other domestic issues, Romney now is presenting an etch-a-sketched foreign policy persona.

This tactic worked brilliantly with Obama during the first debate. The president apparently prepared to debate a Romney that no longer exists. It may work as well regarding national security policy. Observers do not seem to be able to react effectively; instead, they see either clear visions of the past Romney or a “new” and intended fuzzy version – one that is less scary to the political middle ground that Romney must seize if he is to win the election in November.

Some observers say the VMI speech is the neo-cons and George W. Bush all over again. One observer I particularly respect, Kelly Vlahos at The American Conservative, laid it out clearly in a commentary, “Romney’s Pretty Little War Speech.”

Meanwhile, bloggers from the left at “Blue Virginia” and “All Things Democrat” also saw distinct visions of Bush and the Neo-Cons.

Simultaneously, the highly intelligent Fred Kaplan at Slate saw something entirely different: Romney was saying he would do in Syria, Libya, Egypt, Afghanistan and even Iran pretty much what Obama has already been doing, and in one of the first major articles published describing Romney’s speech, pretty much so did the New York Times.

I have to admit that Romney had me hornswoggled as well. I was astonished to find him not repeating his mantra for the defense budget: that it should match 4 percent of the gross domestic product (GDP). A favorite of the Pentagon budget inflation crowd, the advocacy of 4 percent of GDP for the Pentagon (which could mean more than a $100 billion increase in 2013 alone) reveals in Romney the antithesis of a smart businessman’s approach: he wants to throw money at the problem, thinking that will make it go away. I had myself all ginned up to criticize Romney for all that, but he snapped the red cape away, leaving me to fecklessly flail at air if I tried to make my point.

For a politician wanting to fuzz things up, making it unclear exactly what he intended to do while also making his opponents look inept, Romney did a masterful job. We can fully expect him to continue this remake at the third presidential debate on foreign policy on October 22.

It will be most interesting to observe whether Obama has the wit and skill to criticize an opponent who, as a result of his own remake, seeks in large part to imitate Obama-in substance, if not at all rhetorically.

The etch-a-sketch Romney is a clever – even if unoriginal – campaign tactic: pivot from pandering to the party base in primaries to pandering to the moderate middle in the general election. However, it suggests precisely what Romney seeks to avert.

By exercising his extreme pragmatism on national security issues, Romney is making it abundantly clear that he is an opportunist-the worst and most dangerous sort of person to handle questions of war and peace. We observed precisely this kind of pragmatism in October 2002 when Senators Hilary Clinton and Joe Biden swung to favor authorizing George Bush’s war against Saddam Hussein. It was just before the November 2002 elections, and these and many other Democrats opted to appear “strong” on national security and, we now know, weak on the facts and oversight-and, by implication, character.

In 2002, US Senate prospect Barack Obama opposed the war in Iraq. However, as president he can be said to have reinvented himself to order expanded drone operations against presumed extremists (including American citizens and other civilians) and he has adopted war policies that his opportunistic Republican challenger now seeks to differentiate himself only in degree and by rhetoric, not in real substance. We may now face a choice of two opportunists, not just one. Which one do you prefer?

Winslow Wheeler, a member of the Breaking Defense Board of Contributors, is a defense budget expert and analyst at the Center for Defense Information at the Project on Government Oversight (POGO). He is also a HuffPost blogger.