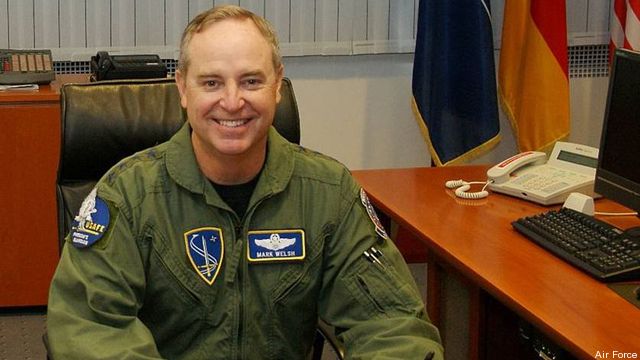 WASHINGTON: The likely pick for next Air Force Chief of Staff possesses acquisition experience and would bring a vibrant leader and strong communicator to head the nation’s air and space force.

Gen. Mark Welsh, commander of U.S. Air Forces in Europe, served under both Mike Hayden and Leon Panetta at CIA as the man responsible for linking the military and the intelligence agency. Panetta knows him pretty well, we hear. The outgoing chief of staff, Gen. Norton Schwartz, is expected to hand over command on August 10.

Hayden presided over Welsh’s promotion to lieutenant general and had this to say about him: “His natural optimism, keen sense of humor, and compassionate spirit have always made him an invaluable colleague to any organization lucky enough to have him.” Given Panetta’s boisterous sense of humor, and strong sense of duty, he and Welsh would seem to make a natural pair.

I polled about 20 people about Welsh and the other likely picks for chief of staff and Welsh uniformly elicited the highest praise. The other two contenders are the heads of the air combat and mobility commands, Gen. Mike Hostage, and Gen. Raymond Johns. A well-placed Air Force source said Hostage was next in line to Welsh. And this source cautioned that the fact that Welsh already occupies the top slot may well make him a target for any opponents lurking in the wings. Remember what happened to then-Vice Chairman of the Joint Chiefs Hoss Cartwright.

“The Air Force needs a strong leader rather than an organization man as its next chief, and Welsh seems well-suited to that role,” Loren Thompson, defense consultant and analyst at the Lexington Institute.

Here’s what the Air Force source said are the “characteristics badly needed” by the next chief:

Welsh served April 2003 to June 2005 as director of Global Power Programs for the head of Air Force acquisition.

In that vein of fixing acquisition, a member of the Breaking Defense Board of Contributors, Winslow Wheeler, said he hopes “for an individual who understands why the F-35 is a disaster and who has a plan for terminating it and replacing it with USAF combat aircraft that are far better and a lot cheaper.” Wheeler, a former congressional staffer and a budget expert, was not optimistic that any such general could be found. “I regret to say my hopes are not high that any serving general in the US Air Force has a clue what I am talking about, let alone agrees.”