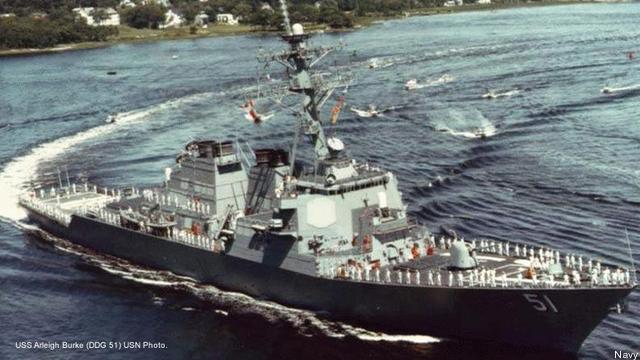 LOS ANGELES: We can’t show you a photo but Northrop Grumman is developing an intriguing bird for a DARPA program called the TERN. (The company showed us a model but no photos were allowed.)

The company showed a small group of reporters a model of the aircraft, which is designed to land and take off from the tight confines of the Navy’s most common warship, the DDG 51, as well as the Littoral Combat Ship. It’s a roughly 40-foot flying wing that flies using 10-foot counter-rotating rotors. Rotors on top it looks like a knife-bladed helicopter. In forward flight it looks like a flying wing with two propellers, one of top of the other.

Why is DARPA interested? “Helicopters are relatively limited in their distance and flight time, and long-distance fixed-wing manned and unmanned aircraft require either aircraft carriers or large, fixed land bases for takeoff and landing,” the Pentagon’s advanced research agency says on its Tern website. “To help overcome these challenges, the Tern program envisions using smaller ships as mobile launch and recovery sites for medium-altitude, long-endurance unmanned aerial systems (UAS). The goal is to provide long-range ISR and other capabilities from the decks of forward-deployed small ships.” 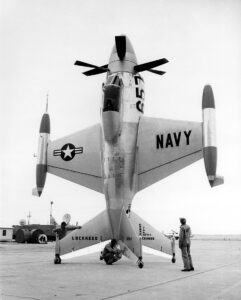 The EFV made by Lockheed in the 1950s may not have inspired Northrop’s Tern offering, but it will give you a vague idea what it looks like.

The aircraft won’t be delivering heavy ordnance over long distances. Instead, it’s designed to carry about 500 pounds for 600 nautical miles. Unless DARPA drops the program, Northrop is a shoo-in as competitor AeroVironment was dropped from the program by DARPA in September. The winner of Phase 3 should be announced in early January.

The first powered wind tunnel test of the Tern should be done soon, Chris Hernandez, Northrop’s VP for research, technology and advanced design, told us. That will be an important milestone, he said, because the air intake just below the counterrotating-blades poses complex aerodynamic challenges. The company’s modeling predicts it will work, “but you never know until you actually try it,” he noted carefully.

If DARPA awards the deal to Northrop, that will be followed by a full-scale prototype performing an at-sea demonstration in the Pacific Ocean, perhaps on a barge or a decommissioned warship, Hernandez said.

Northrop Grumman paid for my hotel and flew reporters to and from California on a corporate jet.