The plan, dubbed the Arms Transfer Initiative, picks up on work started under the Obama administration, while adding a Trumpian element to the proposal that is described by administration officials as both promoting his America First philosophy while ensuring that allies are better able to provide for their own security.

One administration official, emphasizing that the plan has not been finalized, told me key elements include an effort “to ensure that U.S. industries have every advantage in the global marketplace,” while making sure that decisions on selling equipment “are not delayed unnecessarily, and that when the U.S. government decides a sale is in our national security interest, we…follow through.”

The official was quick to note that in internal deliberations, the State Department has made clear it won’t budge on human rights conditions being met by the countries in question, and that sales “will not come at the expense of human rights.”

That commitment can bend with the circumstances, however, as has almost always been true. The U.S. government regularly approves billions in sales to countries who have come under international condemnation for how they use those weapons. Just last year while on a visit to Saudi Arabia, president Trump proudly announced a notional $110 billion in military sales to the country, which human rights organizations and the United Nations have accused of striking civilian targets with impunity in its war in Yemen. Not to mention the treatment of Saudi women, political prisoners etc etc. American military officials at Central Command have privately acknowledged the bloody toll Saudi and Emirati airstrikes have taken on Yemeni civilians, while there’s been little slackening in the American commitment to sell the country arms, provide intelligence and other military support to the Saudis and their other allies..

Underscoring Trump’s interest in foreign military sales, just last week he orchestrated an awkward scene in the Oval Office during the visit of Saudi Arabia’s Crown Prince Mohammed bin Salman. With the cameras rolling during what is normally a routine grip and grin opportunity, the president held up a series of large cue cards detailing billions in weapons sales to Saudi Arabia, holding the cards directly in front of the prince. The new leader, who spearheaded the Yemen intervention and is pushing for a harder line on Iran, sat with a strained smile as the president ticked off sale after sale adding up to about $12 billion. “That’s peanuts to you,” he told the prince.

The NSC, which did not return a request for comment, has yet to circulate the final draft of the Arms Transfer Initiative to the State Department or Pentagon, but one State Department official told me that they, “expect to see process improvements to make regulations easier for companies to follow,” with “more public advocacy for foreign partners to buy American.”

One former Pentagon official familiar with the project said the NSC has been been “working hard to get it out this spring, but the turnover at State and NSC doesn’t help matters much. My sense is that they’re pretty far along, though.”

There have already been a series of meetings with representatives of the defense industry to “solicit their thoughts on how to minimize the self-inflicted bureaucratic and administrative hurdles to U.S. competitiveness,” the administration official told me, while pushing the America First policy of  “better aligning our national security and foreign policy objectives as well as economic imperatives for American jobs.”

But the turmoil orchestrated by the president himself in ousting his Secretary of State and National Security Advisor via tweet has taken its toll, with multiple officials expressing uncertainty over when the NSC will issue the final paper to the rest of the government. 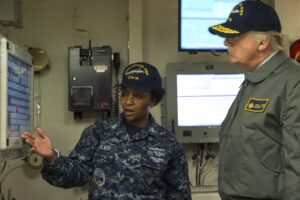 One issue to watch is how closely the administration will link this project with proposed reforms to selling drones to foreign partners, or if they morph to become two separate issues. They may well be treated differently as transfers and sales of unmanned aircraft are subject to the Missile Technology Control Regime, a consortium of 35 nations that exercises oversight over what kinds of missiles and drones can be exported from one country to another. Drones are often considered missiles in the context of the MTCR.

Under the terms of the current MTCR, any system capable of carrying a payload of 500-kilograms for more than 300 kilometers is subject to a “strong presumption of denial” for transfer. But the changes being proposed by Washington seek to open new categories of drones available for sale in part by focusing on speed — allowing drones that can fly less than 650 kilometers per hour to be capable of being shipped to international partners.

A meeting of the MTCR representatives is slated for April, but it isn’t clear if the American proposal will be introduced then. American drone manufacturers have long complained that they are restricted in what they can sell overseas, while countries like China and Israel are gobbling up the international marketplace in unmanned aircraft, unencumbered by the many self-imposed U.S. restrictions.

Remy Nathan, vice president of international affairs at the influential Aerospace Industries Association told me that he expected the proposed changes being worked by the White House for arms sales in general to emphasize wrapping up deals quickly. The proposal also needs to answer “how we’re making sure we get to the right answers quickly, because you’ve seen with this administration how important speed is. Flash to bang is important.”

Nathan added that the defense industry is looking to have a better level of coordination between industry and government so industry can plan better. But early indications about what will be in the Arms Transfer Initiative “speaks to what we’ve been talking about all along — making this process more efficient, transparent and accountable. What we’re looking for is a strategic plan executed quickly.”

In 2017, the State Department approved a total of $153.7 billion in defense sales — $41.9 billion in Foreign Military Sales while licensing an additional $111 billion in direct commercial sales between the American defense industry and foreign governments.

Remember, of course, that every other administration for much of the last 20 years has pursued some form of major arms export reform. John Hamre, head of the Center for Strategic and International Studies, pushed hard to win fundamental changes to the system when he was Deputy Defense Secretary back in the late 1990s. The Obama administration pursued changes, and now we have Trump.