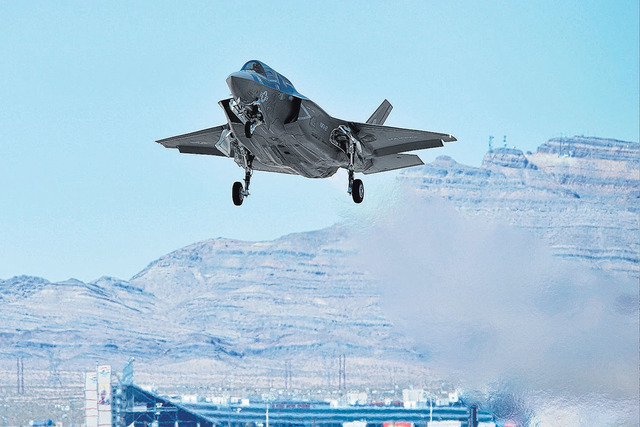 Observe, Orient, Decide, and Act. The OODA Loop remains a key concept for those who fight, especially fighter pilots. After all, Air Force Col. John Boyd made it and his theory of Energy-Maneuverability famous with his bold claim to be able to defeat any other pilot within 40 seconds. Boyd helped inspire the designs of the F-16 and F-15. But the days of speed and agility as kings may be waning. In what we think is a groundbreaking piece, we offer a new theory for fighter dominance, as well as for the domains of Electromagnetic Maneuver Warfare and Cyber Warfare. The key: getting good information more rapidly than the enemy and being able to use it more quickly.The authors of the new theory are Lockheed Martin’s Tod Schuck and the Air Force Research Lab’s Erik Blasch. Read on. The Editor.

The F-35A excelled at the Red Flag exercises at Nellis AFB this year, leaving advocates of traditional fighter aircraft design and performance shaking their heads.

The 13 F-35As faced the most advanced aggressor aircraft and simulated threats available and the Joint Strike Fighter’s performance “far exceeded expectations,” Program Executive Officer Lt. Gen. Chris Bogdan said. The latest figures show a kill ratio as high as 20:1 for the F-35A. This performance advantage is changing the way the services are understanding how to fight with the F-35. For example, Capt. Stephanie Anne Fraioli’s article in the Air & Space Power Journal notes that: “With fourth-generation fighter airframes, speed and energy equaled life and survivability. In the fifth-generation realm, information equals life.”

This last statement that “information equals life” is the key point. When Col. John Boyd formed his energy-maneuverability (EM) theory in 1966 with Thomas Christie and Lt. James Gibson, he created the concept that the available energy in a fighter aircraft “equals life”. EM theory provides a method to understand the relationship between altitude and the kinetic energy (position and velocity) of an aircraft to define aircraft maneuverability. Boyd is famous for his claim that within 40 seconds, from an initial position of disadvantage, he could defeat any opposing pilot via the use of his EM principles in mock aerial combat.

Over several years the problem space in modern warfare has changed. In Command and Control (C2) there are four domains that have been described by Drs. Alberts and Hayes: physical, information, cognitive, and social. Boyd’s work focused on the physical domain – designing a multi-ton fighter aircraft so that it would always be in a position to dominate an adversary in a dog fight. Colin Chapman, founder of Lotus Cars in the United Kingdom, is famous for a similar design method. To him, weight was always the enemy in the “dog fight” of close wheel formula racing. He often defeated much more powerful and heavier opponents because his cars were more maneuverable and retained more energy exiting the corners in races. In motor racing, the more speed that you carry out of a corner, not into it, will always result in a faster course time.

Today in warfare, information domain maneuverability matters more than physical domain maneuverability. Aerial dogfights have been replaced by beyond-visible-range (BVR) targeting and execution. In his article about the Red flag exercise, Colin quotes Lt. Col. Tyler Lewis, commander of the 57th Adversary Tactics Support Squadron at Nellis AFB that in a fourth generation aircraft “you get whacked a lot”. Lewis often had no idea he was going to die until he was declared dead during the Red Flag training.

Erik Blasch, of the Air Force Research Lab, and I have recently developed a theory that we believe explains the F-35’s superior performance in simulations and war games like the Red Flag exercises: Information Power (IP) and Information Maneuverability (IM).

Col. Boyd’s EM theory, which shaped the design of the F-15 and F-16 fighters to be superior in the physical domain, has been brought to a new level. IM theory explains how the F-35 is dominant in simulated warfare exercises via the information domain. 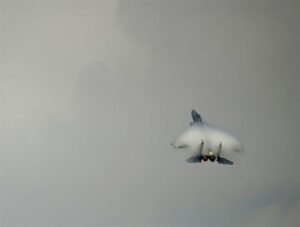 Instead of position, thrust, lift, velocity and other physical parameters, IM theory uses parameters from communication theory. These include communication channel capacity, information entropy, number of messages sent (per unit time), and the velocity of those messages. This produces the IP measure which is similar to the Boyd formulation for specific energy (Es). Then, by comparing your information position (power) to other adversaries, you can determine whether you have the stronger or weaker information position, the basis for IM superiority. The principle here is the same as used for mechanical advantage in a system. If you need to elevate a car in order to change a tire it is nearly impossible to use your bare hands to manually lift the corner of the car you need to raise. However, by using a simple car jack you multiply your exerted force in the area you need to lift the car. IM works this same ratio in the information domain.

The IM theory formulation is explanatory, and Dr. Blasch and I still need to run simulations of the principles. However, a credible theory must also be predictive so we believe that in the analysis of information-centric systems, we will be able to also predict with high accuracy who will win any given engagement in battle or in similar domains such as automated financial trading systems.

The F-35 is a high bandwidth, networked, highly capable sensor/weapon, low observable platform that is superior in the information domain over all other types of aircraft. It will continue to win the “information dog fight” against all other adversaries if it maintains its IM advantage. This is information dominance. This same principle is also true for the Third Offset warfare areas of Electromagnetic Maneuver (EMW) and Cyber Warfare.

Drs. Tod Schuck and Erik Blasch published their early research on the new OODA Loop at the National Fire Control Symposium earlier in February of this year. They are crafting a paper for a general publication.