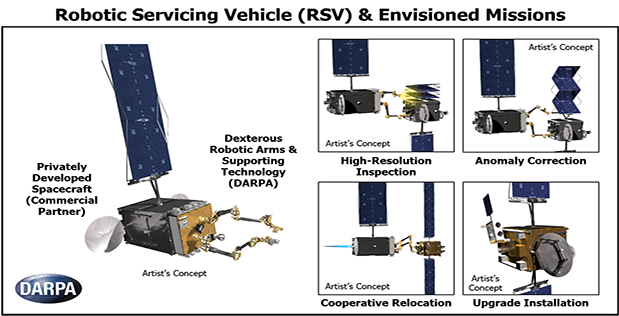 WASHINGTON: Faced with a lawsuit by Orbital ATK and congressional concerns that its robotic satellite servicing program may violate the National Space Policy, the Office of Secretary of Defense has launched a review of the DARPA program.

The news was included in an afternoon DARPA press release announcing the contract award to Space Services Loral (SSL), headquartered in California. The technology, known as Robotic Servicing of Geosynchronous Satellites, would offer enormous benefits to both the National Reconnaissance Office, operator of our spy satellites, as well as the international commercial satellite companies such as Intelsat. Why? Because using RSGS, satellites in geosynchronous orbit — 22,000 miles up — could be checked for problems, repaired, and even get new sensors installed. Today, if something goes wrong, it can be very difficult to tell the cause, let alone fix it.

RSGS would, according to DARPA, allow high-resolution inspection of satellites 22,000 up as well as:

After an on-orbit demonstration, Loral would operate the vehicle and make cooperative servicing available to both military and commercial GEO satellite owners on a fee-for-service basis.

The problem with all this is that Orbital ATK is building a system it believes competes directly with the DARPA initiative. That may be a violation of the US National Space Policy. The policy requires “that the government not build or buy systems” that “preclude, discourage or compete” with commercial systems. Thus the review by the undersecretary for acquisition, technology and logistics.

The press release states the situation plainly: “Under an agreement drafted jointly by DARPA and SSL, the two entities would share costs and responsibilities for the program. While such public-private partnerships have become common in several domains of research and development—saving taxpayer dollars by requiring commercial partners to invest significantly in projects rather than simply receive government funding—the RSGS public-private effort would be a first for DARPA in the space-servicing domain. As such, the Agency’s selection of SSL and the pending agreement have been submitted for review by the Defense Department’s Under Secretary of Defense for Acquisition, Technology and Logistics.” (emphasis added)