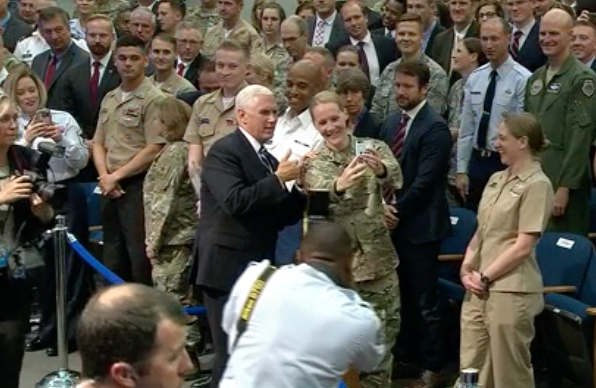 Vice President Pence shares a selfie with a service member at his Space Command speech. August 9 2018

WASHINGTON: The Trump administration has taken an especially hard line against China and Russia this week, sending Vice President Pence, cabinet officials, and top generals out to issue challenges to Washington’s military and political rivals.

Some of the sharpest comments came from Pence today, who delivered a sharp-elbowed lecture on China’s military ambitions and meddling in US affairs both at home and abroad.

Pence charged that China is working to subvert American elections on a scale that outstrips Russian effort in 2016, going far beyond the bitter trade war between the world’s two biggest economies.

“As a senior career member of our intelligence community recently told me what the Russians are doing pales in comparison to what China is doing across this country,” Pence said.

Speaking at the Hudson Institute in Washington, Pence charged that “Beijing has prioritized capabilities to erode America’s military advantages on land, at sea, in the air and space. China wants nothing less than to push the United States of America from the Western Pacific…but they will fail.”

The tension between the US and China reached a new level just last week, when in the middle of an increasingly expensive standoff of tariffs and levies being placed on consumer products, a Chinese Luyang destroyer approached within 45 yards of the guided missile destroyer USS Decatur “in an unsafe and unprofessional maneuver” near the Gaven Reef in the South China Sea, Cmdr. Nate Christensen of  thePacific Fleet told me.

The Chinese ship “conducted a series of increasingly aggressive maneuvers accompanied by warnings for Decatur to depart the area,” after which the US ship maneuvered to prevent a collision, Christensen said.

Pence’s speech came just hours before the release of a new White House report that is expected to draw equally grim conclusions over China’s role in undermining the US defense industrial base.

At a breakfast meeting with reporters in Washington on Thursday, Navy Under Secretary Thomas Modly, fresh from a trip to the Pacific region, said that its clear “we are no longer the only major superpower operating in that area,” and China’s economic and development activity is plan to see in bridges, roads, buildings and ports.

Militarily, “China is becoming much more assertive in the region, and they’re looking for more creative ways to exert their influence,” he said, including economic pressure.

On the other side of the world Defense Secretary Jim Mattis and ambassador to NATO Kay Bailey Hutchison used an alliance meeting in Brussels to slam Moscow for what they say is Russia’s violation of 1987’s Intermediate-Range Nuclear Forces Treaty.

“Make no mistake, this situation is untenable,” Mattis said Thursday.

If Russia doesn’t return to compliance with the treaty, “the U.S. will need to respond,” Mattis added. “The United States is reviewing options in our diplomacy and defense posture to do just that in concert with our allies.”

The Russian missile in question, known as the 9M729, has an estimated range of 3,400 miles, putting it squarely within the INF treaty which bans all missiles with a range between 310 and 3,400 miles.

On Tuesday, Hutchison went further than Mattis, saying that while the option of choice would be for Russia to halt the testing of the intermediate-range missiles, potential counter measures would include “to take out the missiles that are in development by Russia in violation of the treaty,” she said. “They are on notice.” She stressed in a later Tweet that she did not mean launching preemptive strikes, but rather developing US capabilities that could potentially destroy the Russian systems in a crisis — something the US Army is already working on.

Back in Washington, Gen. Joseph Votel, who oversees U.S. forces in the Middle East, told reporters at the Pentagon on Thursday that Moscow’s deployment of the S-300 air defense system to Syria is to help shield “nefarious activities” by Iranian and Syrian forces in the country. “I think this is a needless, needless escalation,” Votel said.

Adding to the cacophony, the Justice Department released an  indictment this morning against seven Russian GRU officers the US government charges hacked hundreds of people in the United States and around the world, stealing personal information and committing identity theft, money laundering and wire fraud. The Russian government was angry it had been caught engaging in systematic doping of Russian Olympic athletes and then barred from the Rio Olympics, and used the GRU in an attempt to punish doping and Olympic authorities, as well as athletes.