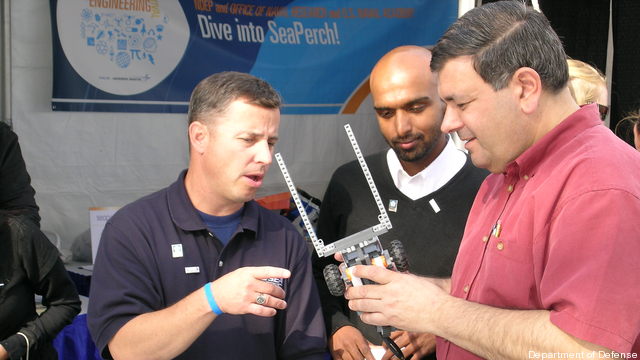 WASHINGTON: Even if Congress staves off sequestration, the defense industry’s troubles hardly be over. But don’t expect a 1990s-style wave of major mergers, agreed officials and analysts at a conference in the Newseum yesterday: Instead, the squeeze will be on smaller companies — which could have an outsized impact on innovation.

“Historically, the defense industry has responded to build-downs through consolidation,” said Oscar Namoos, principal at Sagent Advisors. “Today the market looks very different.” After the great purge of the 1990s, said Namoos at yesterday’s Bloomberg Government conference, there’s really no room left for the major prime contractors to consolidate further, but smaller firms can.

That’s a major concern for the Pentagon’s assistant secretary of defense for research and engineering, Zachary Lemnios (pictured). “I was in the Boston area not too long ago, and one of the major defense contractors has actually acquired a number of companies to build a portfolio in cyber,” Lemnios said. Cyber is one of the few growth areas in the budget, and there are lots of small companies working on it, so it’s an obvious place for the big firms to go shopping. But when a major Pentagon contractor buys up a bunch of small, 30- to 40-person firms, does it stifle the innovation it was seeking, Lemnios asked: “During that acquisition, do you in fact break the culture?”

The danger today isn’t the disappearance of a major prime contractor, agreed retired vice admiral Philip Balisle, now president of Washington operations at DRS Technologies. “The big primes…have prepared themselves for this by developing good cash reserves, and they are probably are ready, realistically, to ride out the wave, at least for a while,” he said. “The area I’m concerned about — not just because I work for one of them — [is] the mid-tier and select small businesses. These are companies that historically have been an engine and an incubator for technology.”

“I worry they are not quite as visible,” Balisle went on. “Government and DoD should be very wary that they let market economics totally shape this industry…. That could really hurt us in a very serious way. [Technological innovation] is one of our leading edge discriminators [for] how we can dominate on the battlefield for years to come.” Making sure enough the second-tier companies survive can’t be left to market forces alone, he argued: “It’s absolutely the responsibility of the government.” What kind of government intervention is called for, though, Balisle did not specify.

Lemnios said the Pentagon is targeting key areas of R&D to nurture through the downsizing. “We’re not planning for sequestration…. What we are planing for is future research” in key areas, he said, repeatedly mentioning cyber and “autonomy” (i.e. drones and other robotics) in particular. “We’re trying to build a much stronger relationship with industry so we can help them inform their own IRAD [internal research and development],” he went on. Under the new strategy, he said, the Defense Department’s own increasingly limited R&D budget will be “much tighter coupled with academia and with industry.” Government laboratories will be a particularly important venue for smaller firms to come forward with innovative technologies, he said. (That’s a big part of the approach the Army has taken with its new cyclic process of Network Integration Evaluations).

There’s certainly potential for small, innovative projects that lean heavily on commercial innovation. The challenge is to make sure the innovators in the defense sector survive.