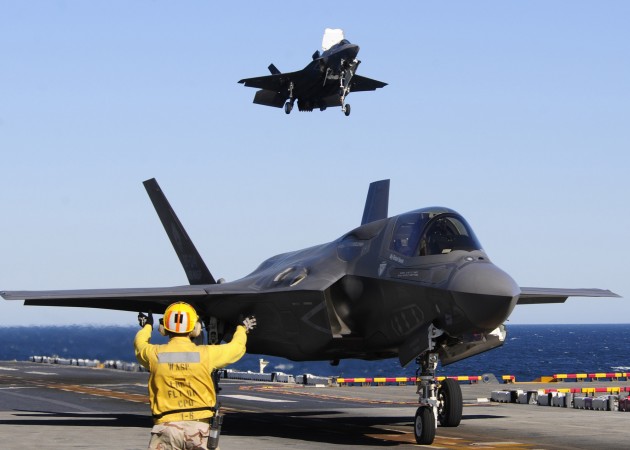 TAMPA: I should have run this story weeks ago when it looked almost certain that the F-35 would fly to the Farnborough Air Show and its cousin, the Royal International Air Tattoo.

Instead, my colleague Andrea Shalal reported it this morning. Tip of the hat and all that.

Here’s the gist from Andrea’s piece:

Current plans call for several F-35s to participate in the air shows, including at least one of the three F-35 B-model jets already built for Britain, with a UK pilot at the controls.

UPDATE:  The British Ministry of Defense (sorry about the spelling, chaps) issued a statement by Defense Secretary Philip Hammond.

We are the only country that is a first tier partner in the project, which is sustaining tens of thousands of jobs in the UK. This fifth generation stealth combat aircraft will be a major boost to British combat air power and it is entirely fitting that the F-35’s first stop outside the United States will be in the UK.”

The MoD statement says that Hammond and Hagel discussed whether the plane would fly in Britain , demonstrating just how sensitive is the decision and how important the aircraft is to Britain. “The selection of two UK airshows also demonstrates the significant role that Britain has in the programme. Approximately 15% of every aircraft is built in the UK,”: the statement says.

You can be certain the United Kingdom’s Defense Ministry pressed its case hard, eager to show parliamentarians that the F-35B can fly, do it safely and prove to F-35 critics that the United States was not afraid to showcase its top weapons program at Britain’s premier air shows. It’s clear signal to Joint Strike Fighter partners — and likely buyers of the F-35B such as Singapore and Israel — that the Pentagon stands firmly behind the program and is willing to risk the criticism sure to come from some quarters over the plane’s software development and the concurrency modifications that must be made.

I will be at the two shows and we’ll get you the best video and stories from the F-35 flights possible.