Pentagon To Hold The Line In South Korea 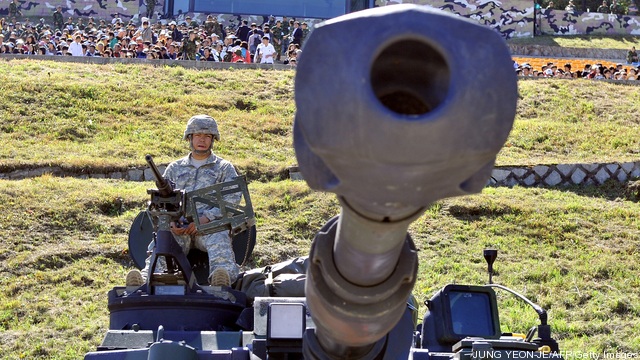 Washington: We may be leaving Iraq, but American troops stationed on the Korean peninsula aren’t going anywhere as the Pentagon sets its sights on the Pacific.

Defense Secretary Leon Panetta is expected to tell his South Korean counterparts the United States will maintain its 28,000-man force in the country for the foreseeable future, according to regional news reports.

Panetta will reaffirm that troop commitment during bilateral security talks this week in South Korea, government sources in Seoul are quoted as saying.

News of the plan comes days after the administration announced all U.S. troops would leave Iraq by the end of the year. American military planners are also withdrawing some U.S. forces from Afghanistan.

The re-commitment to South Korea indicates a distinct shift in military focus from Southwest Asia to the Western Pacific, says one military analyst.

The decision to keep American troops at current levels marks the first of many the United States is likely to take to “reassure the Asia-Pacific region” that America’s commitment to the Indo-Pacific region “will remain strong,” Patrick Cronin, an expert in Asian-Pacific security issues at the Center for A New American Security, told me.

The fact that Panetta is willing to maintain U.S. forces in South Korea in spite of these budget pressures shows just how vested the Pentagon is in remaining “a foremost military power in the Asia-Pacific region.”


Along with maintaining troop levels, the Defense Department is also hammering out a possible sale of American-made Global Hawk unmanned intelligence, surveillance and reconnaissance aircraft to Seoul.

The aircraft would be used to keep tabs on possible threats emanating from China, North Korea and other near-peer countries in the region.

These aircraft, combined with the continued American troop presence in the country will be the “showcase of strength” that the United States is pushing for in the region, Cronin said.

Keeping that many troops on the Korean peninsula and elsewhere in the region could come at a steep cost to the Pentagon. The services are already weighing deep force cuts to meet the debt reduction goals set by the White House.