WASHINGTON: After three years during which it’s been the Air Force’s greatest problem child, Raytheon’s next-generation ground control system for GPS satellites is back on track, the company’s top man on the program says.

Ellen Lord, the head of Pentagon acquisition, and Will Roper, head of Air Force acquisition, met with Bill Sullivan and other Raytheon executives at the end of March for one of the quarterly program reviews of OCX that have been required by the Office of Secretary of Defense since the $6.1 billion program went off the rails more than two years ago.

“That deep dive went very, very well,” Sullivan tells me. Raytheon scheduled the interview to occur before next week’s Space Symposium, clearly hoping to shape the debate as the world’s space geeks gather in one place.

I asked the Air Force if this was correct (along with a number of other questions) and got a statement. It wasn’t exactly on point, but here it is, in part: “The Air Force holds regularly recurring meetings with Raytheon enabling candid discussion on expectations and program performance. Ultimately, the Air Force expects Raytheon to deliver the key critical command and control capabilities necessary to operate the next generation of GPS satellites, which they are on contract to provide.”

OCX is designed to double the accuracy of the Position, Navigation and Timing (PNT) signal, provide unimpeachable cybersecurity against both external and internal attack, and be able to communicate with all of America’s satellites.

The company sent Block 0, known as the Launch and Control System (LCS), to the Air Force in September last year. LCS controls launch and early orbit operations and does the on-orbit checkout of all GPS III satellites. The first of Lockheed Martin’s GPS III birds is set to launch in September — more than four years late.

But Sullivan said, broadly, that “the momentum on the (OCX) program is very positive.” He noted that the Air Force used the ground system for two full mission rehearsals for the first launch of the GPS III satellite. “Since last September, OCX has completely held to cost and schedule,” Sullivan said. The cost has risen substantially since the contract was awarded, from $3.59 billion to an estimated $6.06 billion in the latest Pentagon cost estimate known as the Selected Acquisition Report. That’s up from the earlier estimate last year of $5.49 billion. Two things happened to boost those costs. First, the Pentagon did what everyone says they must not do anymore, they added a new requirement well into the program. The unfunded requirement for a boost of the M-Code, or military standard GPS signal, for what they call Regional Military Protection added $212 million. But the bigger boost — $496.8 million — was simply a boost in price to match the Air Force’s new cost estimate. This is known in Pentagonese as aligning “with the Service Cost Position dated May 25, 2017.” 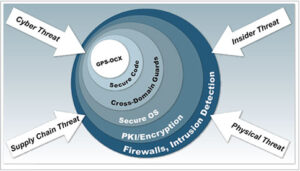 Why has OCX had such cost and schedule problems? According to a May 2016 briefing by Lt. Col. Andrew Zinn of the Air Force’s Space and Missile Systems Center, the “root cause of OCX problems” were an “unrealistic schedule,” at award, “systems engineering and system integration was not implemented in early phases,” and, most important, the “initial cybersecurity requirements (were) not well understood.”

But Sullivan says Raytheon has started work on the “final iteration” of the program that will undergo integration and testing. So we do appear to be on the downward side of the slope.

The use of the civilian sector’s software process known as DevOps greatly reduced the time and errors associated with crucial; software development, Sullivan noted, as we’ve reported before. That may be the program’s biggest legacy both for Raytheon and for the Air Force (aside from a GPS signal that allows us to more reliably strike Syria and North Korea, should it come to that). Sullivan says Lord asked the company “to provide our lessons learned through the Air Force,” about DevOps. Since software development is perhaps the biggest challenge facing the US military and Intelligence Community, especially when combined with making it secure, anything that helps speed things up, make it more reliable and more secure must be good, right?