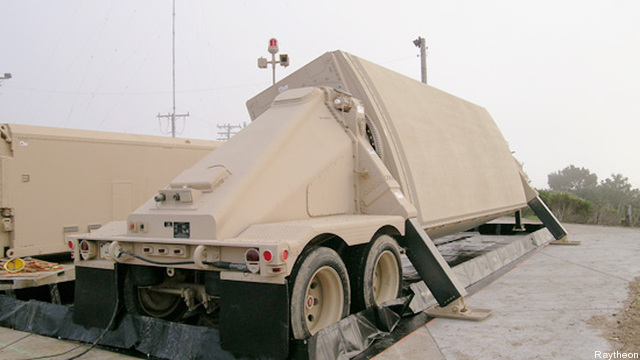 [UPDATED 7pm with Sec. Hagel remarks] WASHINGTON: This afternoon, newly installed Defense Secretary Chuck Hagel gave a nod to a high-tech radar, the AN/TPY-2 — improbably nicknamed “Tippy Two” — as a key component of America’s burgeoning missile defenses. Next week could bring more good news for the radar’s manufacturer, Raytheon: Not only will the company announce the delivery of the eighth TPY-2 system to the Army, but Congress is expected to add back a $163 million radar the administration had cut from the program — that is, if the Senate manages to pass the defense appropriations bill.

“It’s not done yet, no fat lady’s singing,” said Raytheon’s Jim Bedingfield in an interview with Breaking Defense this morning, literally knocking on wood at a coffee shop table. Bedingfield is a retired Army air and missile defense officer who works in Raytheon’s Missile Defense & Space Programs unit, which makes the TPY-2 radar. He’s not come down from his Massachusetts office to DC to meet with members of Congress, he said, but he couldn’t speak to what Raytheon’s lobbyists are doing in the last-minute scramble to protect — or insert — items in the defense spending bill.

Unlike more traditional weapons systems — tanks, ships, planes — missile defense is a growing business both in the US and worldwide as concern rises over North Korean, Iranian, and other growing arsenals of ballistic missiles. With government blessing, Lockheed Martin is selling its THAAD (Terminal High-Altitude Air Defense) anti-missile system to the United Arab Emirates and Qatar — whose Sunni aristocracies are deeply nervous about revolutionary Shia Iran — and TPY-2 is the targeting radar for the THAAD package, so Raytheon gets a sale for every THAAD battery Lockheed sells. TPY-2 can also be used independently of THAAD as an early warning system, spotting enemy missile launches and relaying the data to distant missile-defense batteries, be they Army THAADs, Navy Aegis systems, or the Ground-Based Intercept (GBI) sites in Alaska and California that Hagel has ordered beefed up with almost 50 percent more missiles.

Currently there are two THAAD batteries in service and a third being organized, each with its TPY-2. Then there are five independent radars either currently or planned to be forward-based around the world: in Japan (the pending deployment Hagel talked up today) to keep an eye on North Korea; in Israel, Turkey, and (unofficially) Qatar to keep an eye on Iran and, secondarily, Syria; and at the Kwajalein range in the US Marshall Islands for missile defense tests.

Under intensifying budget pressure, however, the administration decided to cut back its purchases of THAAD and TPY-2. As last as the 2012 budget, the plan had been to buy 18 radars, two a year, nine for the Army’s nine THAAD batteries and the other nine for forward deployment and testing sites. The 2013 budget request released over a year ago, however, cut the 2013 buy from two to one and the long-term plan from 18 to 11. (It also cut the planned number of THAAD batteries from nine to six). Six months into fiscal 2013, the federal government is still operating on an ad hoc Continuing Resolution rather than a proper spending bill, but the Defense Department at least is likely to get an appropriations bill before March 27th, and that bill — as passed by the House and being considered in the Senate — includes an additional $160 million to put the second radar back in the budget. The bill also adds another $100 million for THAAD, although that’s not enough to buy back an entire battery.

It’s worth noting that doubling the number of radars purchased doesn’t double the cost to the federal government: Buying one radar was $217 million, buying two is $380 million. Part of the difference is the number of spare parts and other accessories, but part is genuine efficiency: Buying more radars spreads out both government administrative overhead and Raytheon’s fixed costs. But with budget numbers shrinking and the budget process in utter disarray, it’s increasingly difficult to invest more in the short term to reap long-term savings.