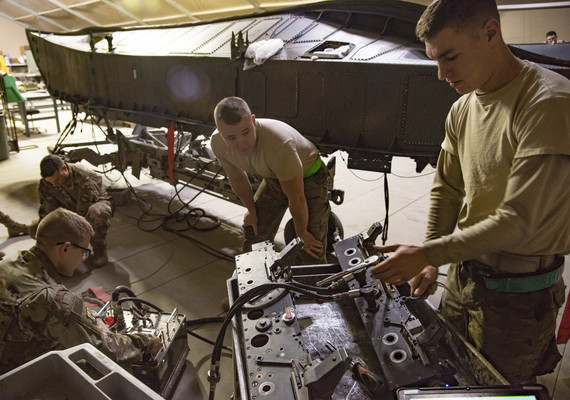 PARIS AIR SHOW: Raytheon, which has increasingly focused on its growing cyber and network business, has won contracts to find and fix cyber vulnerabilities in the Air Force’s F-15 fighter and C-130 transport fleets.

Those are the company’s latest deals in what is a business worth at least hundreds of millions of dollars in the last 18 months. It’s a big shift, says Dave Wajsgras, president  of Raytheon intelligence, information and services.  “I think a few years ago there was a lot of talk, and not a lot of action.”

But the 2016 National Defense Authorization Act required that all weapons begin to be assessed for cyber vulnerabilities, and the 2019 bill kept pressing ahead. The F-15 and C-130 contracts are among those that have resulted from the NDAA language, Todd Probert, Raytheon’s VP for mission support, told me. Because so much of this is classified, Raytheon had to get Air Force permission to talk about the F-15 and the C-130 projects.

So what kind of cyber vulnerabilities does an aircraft have? “It’s a flying network in and of itself,” Todd said.

Aircraft, it turns out, are just as vulnerable as cars, and we’ve all read stories how hackers have been able to take autos over remotely and stop cars in their tracks.

Airplanes have similar points of access, and thus vulnerabilities. Maintainers hook into a plane to find out what’s wrong with it. Smart weapons connect to the plane’s network. The pilot’s helmet mounted display taps into onboard and offboard data. “All these are potential threat vectors we’re concerned about,” Todd said.

To find out more of what Wajsgras said about Raytheon’s space and cyber business, watch the video.