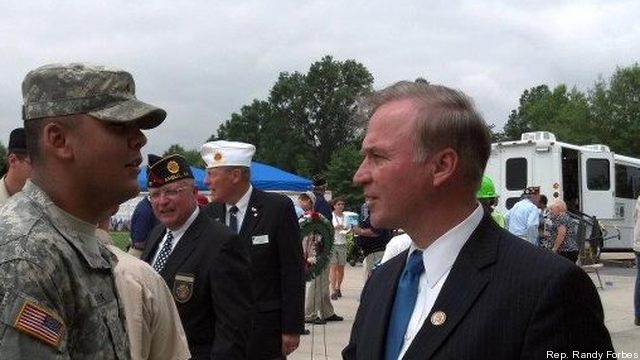 WASHINGTON: With the automatic budget cuts known as sequestration set to start taking effect March 1st, we’re going to see a lot of interesting last-minute plays to stop them. It’s almost certain none of them will work. But Rep. Randy Forbes’s bill introduced this morning, H.R. 773, at least offers the virtue of simplicity: At the stroke of a pen, it would erase half of the sequestration cuts — about $50 billion this year, $600 billion over a decade — those that apply to the Department of Defense.

“Yep, that looks like it would do it,” budget expert Todd Harrison of the Pentagon’s favorite thinktank, the Center for Strategic and Budgetary Assessments, wrote in an email to Breaking Defense after a quick look at the short, three-page bill. (Click here to read HR 773 yourself). “This bill would turn off the sequester for national defense and increase the deficit by $600 billion over the decade. Chance of passing: 0.0001%.”

Well, it’s worth a shot, Forbes told Breaking Defense this afternoon. “In the framework that we see Washington in today, I don’t think that anything’s likely to happen,” said the Virginia Republican, chairman of the House Armed Services subcommittee on seapower. “What I’m trying to do is bring a little common sense back to the table.”

Forbes was one of the minority of legislators who voted against the 2011 Budget Control Act (BCA) that set the entire sequestration debacle in motion, he pointed out. “I told everybody then [that] the cuts that were in there for defense were too great then [and] sequestration was too dangerous,” Forbes said. “I have tried for the last year and a half to get it fixed, and now we’re coming up to the final week.”

Originally the sequester was supposed to be such a painful, inefficient means of cutting the budget that it would force Republicans and Democrats to compromise on something smarter. That hasn’t happened.

“You’ve had your opportunities, it hasn’t worked,” Forbes said. Now, it’s time for Congress to face facts: “You screwed up. You made a mistake when you voted for sequestration the first time.”

Forbes acknowledges he hasn’t consulted with House Armed Services Committee chairman Buck McKeon or with the House Republican leadership about his bill. Technically, neither Forbes nor McKeon have jurisdiction to run such a bill through their panels without approval from the Budget Committee — whose chairman, former vice-presidential candidate Paul Ryan, is a diehard deficit hawk and would never give up $600 billion in debt reductions.

But what this long-shot bill makes painfully clear is just how easy, in terms of legislative mechanics, it would be to turn off sequestration in part or whole if Congress decided to. The entire bill is three pages long, and most of that is white space and procedural minutia. The actual substance is halving two dollar figures and one sentence in the Budget Control Act. That’s all it would take.

For that matter, dial those two dollar figures down to zero instead, and the whole sequester would go away. So would the savings, of course, which means Congress would have to find some other way to reduce the deficit. Deficit reduction has proven so politically difficult in the past that some legislators have decided the blunt instrument of the sequester is the only way to get it done, while those who do want to stop sequestration can’t come up with alternative cuts a majority can agree on. Hence the gridlock.

“Legislatively, repealing some or all of sequestration/BCA is a simple matter. No Congress has the power to bind the hands of a future Congress,” said Chris Hellman, senior analyst at the liberal National Priorities Project. “The key, of course, is getting the votes. I don’t think there’s any way that a ‘protect the Pentagon only’ bill would ever pass. In fact, I’ll say there’s no way. And given the political climate now, I think it’s only slightly more likely that you could get a full repeal bill through.”

But as members of both parties wring their hands over sequestration, it’s worth remembering that Washington — Congress and the President both — imposed this crisis on itself, and on the country. Sequestration is not some external, implacable force: It’s words on paper that we wrote ourselves, and we can erase them whenever we want.