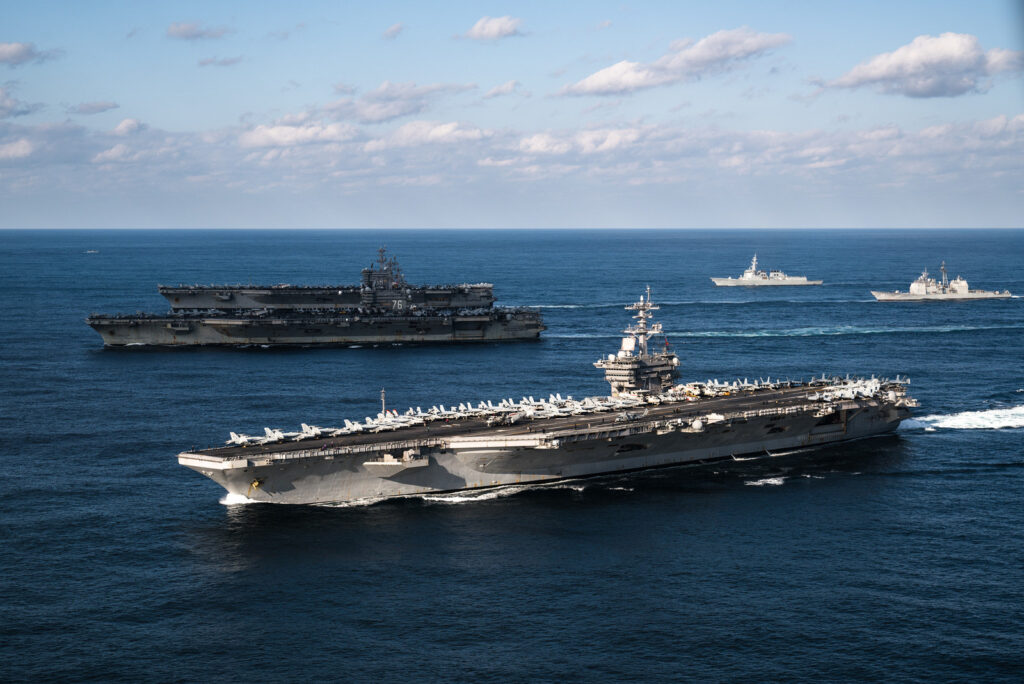 Three supercarriers, the Reagan, Roosevelt, and Nimitz in a rare three-flattop exercise in the Pacific.

The Navy’s new Strategic Readiness Review lays out a bold program to fix the fleet after a summer of deadly collisions. Commissioned and championed by Navy Secretary Richard Spencer, the SSR (as it’s already initialized) will shape the debate in the Pentagon and in Congress for 2018. So we asked submariner-turned-thinktanker Bryan Clark to review the review. Clark, now with the Center for Strategic & Budgetary Assessments, found much to praise, but he had some misgivings. While the review does an excellent job explaining the stress on the Navy and proposing a new “learning organization” to prevent future fatal mishaps, he told us, it assumes away some serious strategic problems and is short on hard data. Clark’s five-point analysis follows. Read on! The Editor. 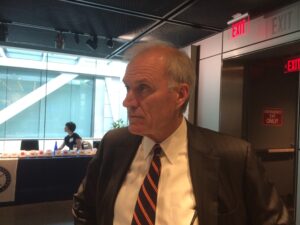 Richard V. Spencer, Secretary of the Navy, talks to reporters at the Newseum in Washington, DC

1. Supply-Demand mismatch: Kudos to Navy Secretary Spencer for highlighting the role of excessive deployments in stressing the fleet and eroding readiness. While the Chief of Naval Operations and Navy budget materials have made this point, the secretary was very clear in saying the implication of the supply-demand mismatch is that the Navy will need to say “no” to some deployments, until or unless the fleet grows to a sustainable size. The report does an excellent job of examining the structural and organizational reasons why it is hard for the Navy to align demand with supply and proposing some changes that will help address the problem.

2. Fleet size: The problem with the report’s significant discussion of resetting the supply-demand mismatch is that it isn’t followed with a discussion of why the mismatch exists. The implication is that these deployments could be eliminated without significant impact. In some cases that may be true, but the pressure being exerted by China, Russia, Iran and North Korea on their neighbors has been driving up demands on naval and other forces. The report discusses the need to grow the fleet early on, but does not address the underlying problem that fixing the supply-demand mismatch can have strategic consequences. The National Security Strategy released Monday highlights the fact the US is in competition with China and Russia, and has adversarial relationships with Iran and North Korea. But the administration’s budgets don’t seem to follow through with a military that can support that kind of strategy.

3. Learning organization: I liked how the report describes the evolution needed in how the Navy assesses itself. Many times, a service or company will say it needs to become a “learning organization,” but the description of what that means reads like a lot of vague “Ted Talk” aphorisms. The description in this report is very specific and focuses on the use of data analytics to assess how the Navy is performing and then applying those to organizational change. There is a lot of data collected by the Navy, and it is usually not well analyzed or applied. The Digital Warfare Office is doing great work on this front, as the report indicates.

4. Data in the report: That said, the strategic review does not include much data. It would have been more compelling had the strategic review actually applied some of the learning organization approaches described in the report. Some of the data that could be used for this purpose would be classified, since it addresses readiness. Some of it could be declassified by Spencer, however, or when abstracted up to very large data sets, it may no longer be classified.

5. Credibility: The lack of data highlights why the military sometimes is accused of “crying wolf” about readiness. The few anecdotes shared in this report or Congressional testimony are usually not enough to be compelling. The services need to be willing to use data to show how they are doing if they want Congress and the public to push for more funding or budget continuity.