Posted by Theresa Hitchens on October 3, 2019 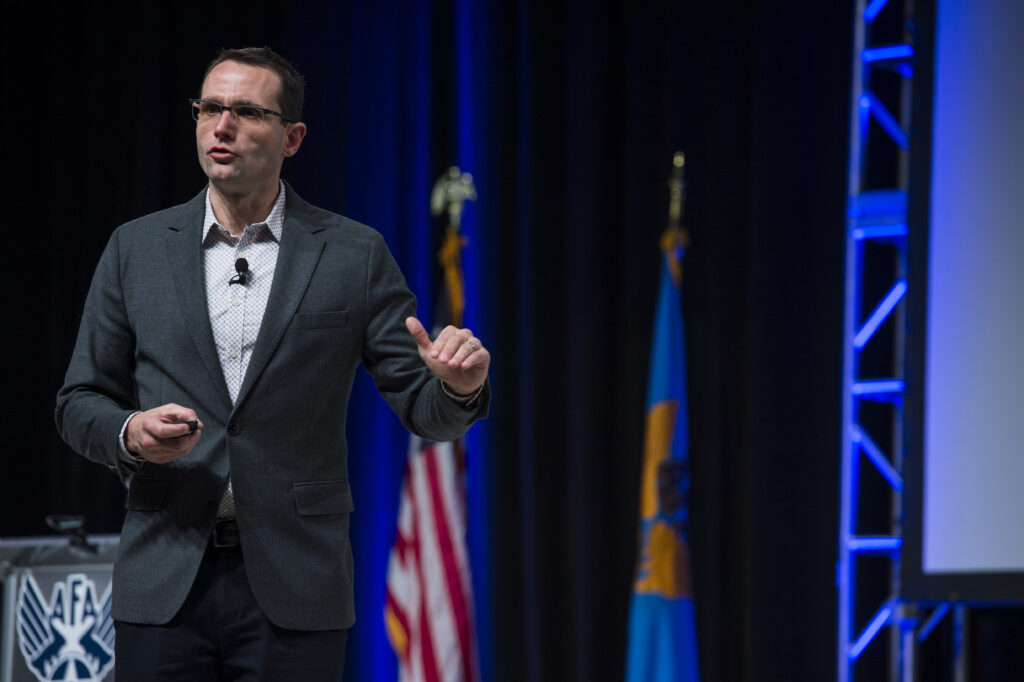 Will Roper, head of Air Force acquisition, at winter AFA this year.

“I am turning to this program, and to Dale in particular, to find a way to bring the best technical expertise that we have to bear, to understand industry’s business case – because if it’s not good for industry it’s not going to happen – to see if there’s a way we can continue innovating, doing things smaller, faster, more agile where you don’t have to necessarily be a company that can build a thousand things to work with us,” said Will Roper, Air Force Acquisition czar. “I have the utmost confidence that if there’s a yes to be found in this universe, you [White] will find it.”

The initiative to use digital tools and ‘spiral development’ to field upgraded fighter jets every four years or so is a brain child of Roper, who was at Wright Patterson AFB in Ohio yesterday to stand up the new Advanced Aircraft PEO at the Air Force Life Cycle Management Center based there. As Breaking D readers know, Roper fleshed out this approach at the Paris Air Show, calling for much faster acquisition as was done in the days when the US turned out an X plane almost every year.

“The new office was created to transform the Next Generation Air Dominance (NGAD) program into the Air Force’s Digital Century Series initiative, using digital engineering, modular opens systems architecture, and agile software development to design advanced airplanes faster and enter production with a significantly lower learning curve,” explains an Oct. 2 Air Force press release. “The Digital Century Series aims to improve the speed and flexibility with which aircraft can be fielded by using all-digital design and manufacturing technologies, but will not alter the warfighting technologies pursued in NGAD.”

Roper told reporters at the 2019 Air Force Association (AFA) conference on Sept. 16 that he intended to create a new team to apply what he calls the “holy trinity” of innovation technology to building new aircraft: agile software development, open architecture for both hardware and software, and cutting edge “digital engineering” that uses 3D modeling of aircraft development from cradle to grave.

White previously served as the PEO for Intelligence, Surveillance, Reconnaissance and Special Operations Forces, and was responsible for the acquisition execution of a $22 billion portfolio, developing, producing, testing, modifying, fielding, and sustaining Air Force ISR and SOF platforms and related sub-systems. His former job offers a pretty telling glimpse at the most important capabilities for these new aircraft, as well as the approach the Air Force is likely to take to build them — one much more in line with the speedy way special operators build and buy.

Roper created the Digital Century Series concept as an homage to the 1950s Century Series that saw near simultaneous production of differing jet fighters. The goal is to break out of today’s decades-long development and procurement cycles for aircraft, in order to flummox Russia and China in any future conflict. The spiral development process — modeled after how the commercial software world works — would be applied not just to software code, but to all aspects of aircraft design. Roper expects the concept to be applicable not only to NGAD (that includes not just a sixth-generation fighter, but also drones and missiles linked to fighters via integrated, cutting-edge command and control systems), but also to other Air Force development efforts such as satellites.

However, not everyone is as enthusiastic about the Digital Century Series as the ever-ebullient Roper. Several long-time aircraft and airpower analysts have pointed out that the Century Series itself resulted in a fair share of flops — such as the F-104 Starfighter that was nicknamed the “lawn dart” by its own pilots and the “witwenmacher (widdowmaker)” by the German Air Force.

“I’m really not a fan of this idea. I don’t like any kind of disconnect between companies that design planes and companies that manufacture planes. That old Soviet system really didn’t work so good,” Richard Aboulafia, vice president of analysis at the Teal Group, told Breaking D today. “But also, airframe technology is largely mature, so I’m not sure why DoD would divert cash for technology and systems development, and putting it instead into airframes. Systems and technologies seem like a better place to put development resources, rather than airframes.”

Further, Aboulafia said, if the Digital Century Series isn’t about airframes at all — but only software, avionics, electronics and the like — then the moniker is misleading. If it is actually a “Century Series for systems,” he said, then the concept really harkens all the way back to the 1990s Joint Advanced Strike Technology (JAST) program, that eventually morphed into the Joint Strike Fighter program, that in turn spawned the F-35 fighter jet. “Bring back the original JAST, not the Century Series!” he said, with an almost audible laugh.

Color the House Armed Services Committee (HASC) skeptical as well. The HASC version of the fiscal 2020 National Defense Authorization Act (NDAA) cut $500 million  — 50 percent — of the NGAD request, citing the vagueness of the concept. HASC is in conference with its Senate counterpart to determine the NDAA’s final outcomes.

Another analyst noted that the ‘Century Series’ model also could run into congressional pushback. “On the plus side, having a multiplicity of design and production shops rather than two huge companies might spread the work to more congressional districts,” the analyst said. “But Congress tends to put money behind programs based on the number of jobs and other economic impact they generate in a given location. We are not used to a model where many people are getting a small benefit rather than a few people getting big benefit and creating a strong constituency for a single program.”