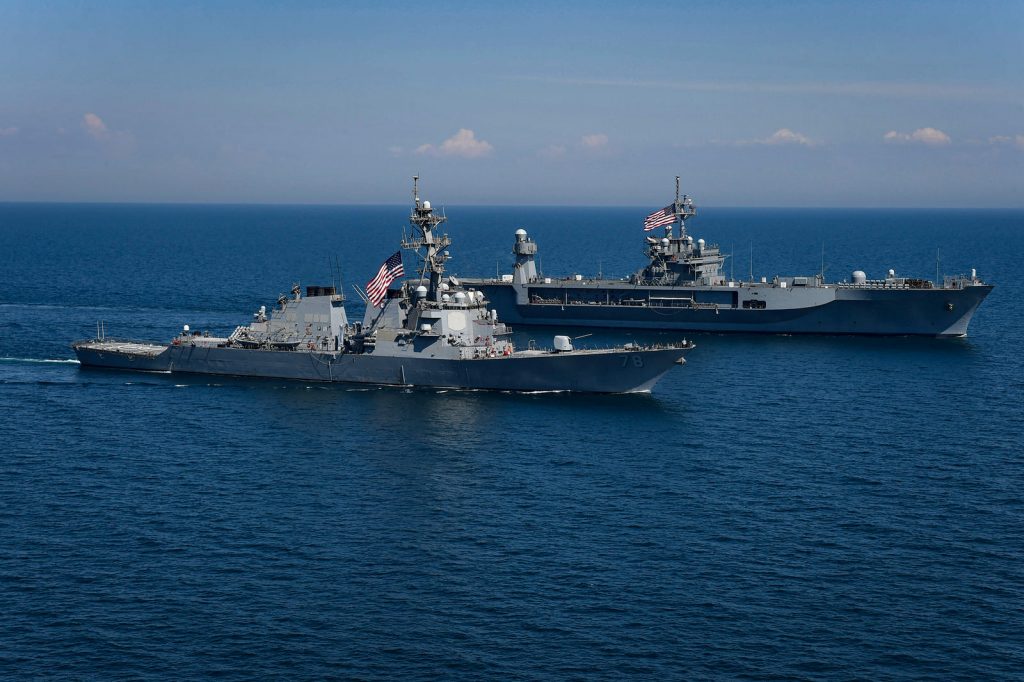 USS Porter and the command and control ship USS Mount Whitney in the Black Sea during exercise Sea Breeze 2018 in July.

WASHINGTON: If you listen to any senior official from the Pentagon talk for a few minutes, they’ll tell you that the age of great power competition with Russia and China is back, and it’s their focus.

Moscow and Beijing have been listening.

For the second time in just over a month, the US military today found itself eye to eye with the competition — causing the Pentagon to again protest that the Russians and Chinese are putting lives at risk.

During today’s incident, a Russian SU-27 fighter pulled within meters of a Navy EP-3 Aries II plane operating in international airspace over the Black Sea before punching its afterburner while peeling off, giving the US crew a rough ride as the Russian pilot slid off into the horizon.

A Navy statement called the 25-minute intercept “unsafe due to the SU-27 conducting a high speed pass directly in front of the mission aircraft, putting at risk the pilots and crew.” In the dry words off the Navy, the Russian jet made a second pass, “applying its afterburner while conducting a banking turn away. The crew of the EP-3 reported turbulence following the first interaction, and vibrations from the second.”

The incident comes weeks after another close call in the South China Sea when a Chinese warship came within 45 yards of the USS Decatur, forcing the US ship to change course. The Navy called that an “unsafe and unprofessional maneuver.”

The Decatur was conducting a Freedom of Navigation Operations (FONOPS) patrol near the Gaven Reef in the Spratly Islands chain where China claims several fake islands as its own.

That close shave came at the end of a busy week in the region, which saw a B-52 fly over the East China Sea and two other B-52s pass over the South China Sea in international airspace. In response, China refused a request to allow the USS Wasp to make a port visit in Hong Kong, and Defense Secretary Jim Mattis cancelled a planned visit to China in October.

While the Chinese island-building spree in the South China Sea has kept tensions in the vital waterway high for the past several years, the Black Sea has also quietly emerged as a hotspot following the illegal Russian annexation of Crimea in 2014, and subsequent military buildup on the peninsula. In January, another Russian SU-27 came within five feet of an EP-3 over the Black Sea, forcing the surveillance plane to fly through its jet wash. 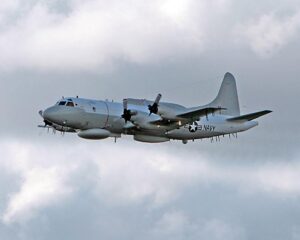 “The Russian Federation is using the Black Sea to project force in the eastern Mediterranean,” Romanian Defense Minister Mihai Fifor told the Aspen Institute in August. “The situation has changed dramatically in the last year.”

“NATO’s primary concern is with Russian submarines in the Mediterranean, not as much in Black Sea,” said Dmitry Gorenburg, an analyst at CNA, but “of course military planners are concerned about the layered air/maritime defenses that would make any kind of conflict in the region very difficult for NATO forces.”

In response Romania — which has expressed concern over its Black Sea coastline for years — has been in the market for anti-ship missiles, and is talking to US and European defense contractors about other potential weapons, with planned purchases over the next several years. Last year, Bucharest also signed a letter of agreement with the U.S. government to purchase the HIMARS rocket system and is working to acquire the Patriot air and missile defense system.

The US Navy has also increased its presence in the Black Sea, and has regularly sent warships into the relatively small waterway as part of an ongoing NATO effort to remind Russia they are international waters. In July, the transport ship USNS Carson City became the first US ship of its Joint High Speed Vessel class to enter the sea, operating alongside the Arleigh Burke-class destroyer USS Carney. The duo marked only the second time since 2014 that two US Navy vessels have operated simultaneously in the Black Sea outside of planned exercises.

The 6th Fleet command and control ship USS Mount Whitney also entered the Black Sea this summer, part of the Sea Breeze 2018 exercise, which also included Ukrainian forces. The exercise caught the eye of the Kremlin, whose spokesperson complained that the exercise was “another attempt to provoke escalation, what is more not only in Ukraine’s southeast but across the Black Sea.”

Underscoring the regional buildup, Ukrainian officials accepted two U.S.Coast Guard Island-class cutters in September meant to bolster Ukraine’s small maritime force as Kiev grapples with increasing Russian harassment of Ukrainian shipping in the Sea of Azov, an offshoot of the Black Sea that sits between Russia and Crimea, whose northern shore remains Ukrainian.

In February, the USS Ross and USS Carney were the first two Navy ships to enter the Black Sea in together since Russia’s seizure of Ukraine’s Crimea.