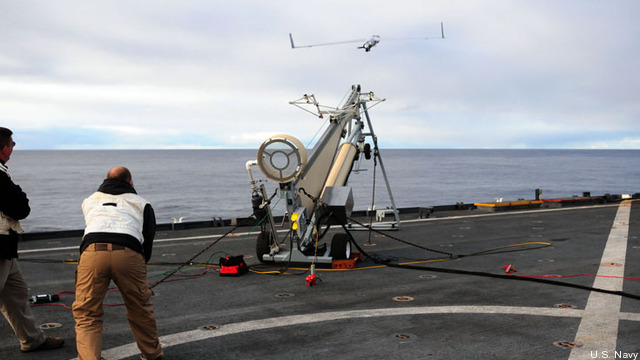 Washington: Swedish aerospace firm Saab is taking on U.S. defense industry heavyweight Boeing and other American firms to land the the rights to a lucrative Navy unmanned drone deal.

The Navy deal, estimated to be worth upwards of $800 million, will be to provide a small UAS to Navy and Marine Corps units until the service’s new Small Tactical Unmanned Aerial System is ready for prime time, Navy spokesman Joe Gradisher told Breaking Defense today.

The winner will support airborne ISR for seven Arleigh Burke-class destroyers, for eight-month rotations at sea, according to the Navy.

Boeing’s Scan Eagle drone is widely considered as being the front-runner to win the aerial drone deal, since it is currently the Navy’s primary close-range ISR system. The Navy has also
selected the company’s Integrator UAS for the STUAS contract last July.

But with the Integrator still several years from production, combined with the recent criticism STUAS has taken on the Hill, the Navy is now hard-pressed to get something viable into the field, according to an industry source.

Aside from CSC-Saab, defense firm Textron is also preparing a proposal for the Navy on the program.

The Skeldar is one example of the helicopter-like UAS the services have pursued in recent years. The Marine Corps is preparing to choose between Boeing’s A160 Hummingbird UAS and Lockheed Martin’s K-MAX drone for its unmanned aerial cargo system later this year.

The Hummingbird is already in service with Special Operations Command and the Navy recently completed operational testing of its newest rotary-wing UAS, the Fire Scout.