Sec. Donley: How Low Can The Air Force Go? — EXCLUSIVE 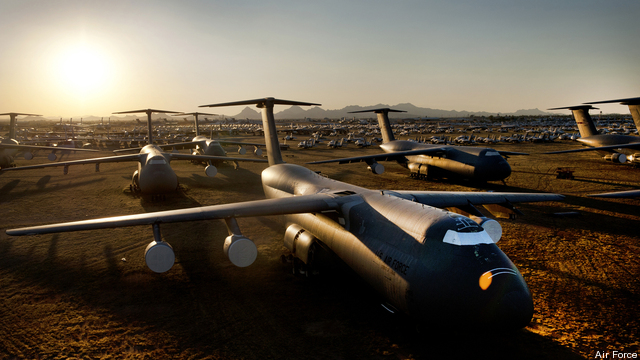 Michael Donley, Air Force Secretary, wrote this second of four op-eds on the future of the Air Force exclusively for Breaking Defense. Today’s piece grapples with just how small the Air Force’s force structure can get while the service can still accomplish its missions.We will run an op-ed early each morning through Friday. The Editor.

Like all of our military services, the US Air Force has been through an extraordinary decade of change. Airmen have moved unprecedented amounts of personnel and equipment to remote theaters of operation; built global command, control, and intelligence operations; provided 24/7 close air support to ground forces; and introduced new technologies, including Remotely Piloted Aircraft [RPAs, aka UAVs].

All of this was accomplished as the Air Force retired nearly 1,900 aircraft and downsized by more than 30,000 active personnel. Today’s Air Force is smaller than before 9/11, and its base budget after accounting for inflation has been relatively flat since 2005.

Faced with further reductions in defense, Air Force leadership made the decision to become smaller in order to protect a high quality and ready force that will improve in capability over time. The question is, how?

Determining where the Air Force can take additional risk in force structure and fulfill the defense strategic guidance is a challenge. Options are limited because, in most mission areas, our “supply” of forces is equal to the strategic “demand” with almost no margin in capacity.

Fighters and bombers represent 18 percent of total Air Force personnel. Though fighter forces have declined for decades, the force levels outlined in the FY13 budget bring the supply in equilibrium with the demand outlined in the defense strategic guidance. We plan to protect the essential air superiority fleet and fighters with multi-role capabilities. While some reductions in the A-10 air-to-ground fleet and the oldest F-16s have been controversial, there could be more downward pressure on these fleets if budgets decline further. Any significant reductions in the bomber force would be inconsistent with the strategic guidance which values long-range strike capabilities.

Mobility forces, including long-range strategic airlifters, tankers, and tactical airlift comprise 13 percent of Air Force personnel. These forces are sized to move and sustain joint forces over long distances consistent with defense strategy. Congress manages the long-range fleet to a specific floor, currently 301 aircraft, with recent approval to go to 275 pending a report on capabilities. The tanker fleet is largely right-sized to support the joint force.

The tactical airlift fleet is sized somewhat larger than the defense strategy would require, but Congress has been inclined to protect Guard and Reserve C-130 units which make up about 70 percent of this force. If additional active duty C-130s are retired, then Guard and Reserve units could have to increase deployments to meet peacetime demand.

The Air Force provides a number of “enabling” capabilities for the joint force, including command and control; intelligence, surveillance and reconnaissance; and space. These enablers, including cyber (an area where all services contribute), account for 19 percent of Air Force personnel and demand for these capabilities has been increasing. Reductions here would, in general, be inconsistent with joint needs; but potential adjustments in both ISR capacity and capabilities may deserve a closer look once US forces leave Afghanistan.

The nuclear-capable bombers and ICBMs that make up two legs of the nation’s strategic nuclear triad account for less than five percent of Air Force personnel. These forces could become smaller as we implement the new START agreement reached between the US and Russia. But potentially deeper reductions must consider multi-dimensional challenges from the world’s emerging nuclear powers in a more complex security environment.

Decisions at the national level will determine the makeup of the nuclear enterprise; however, it must have the focus and resources necessary for credible deterrence. Airmen must know this remains a critical mission with no margin for error. The nation’s nuclear expertise must not be allowed to atrophy; and focused attention is necessary no matter the size of the force.

Air Force special operations and personnel recovery capabilities are in high demand and the expertise of Air Commandos is essential to joint special operations. The ability of Air Force helicopters to fight their way in and out of medevac and recovery operations is unique to the joint team and has proven its value over the past ten years. At less than 3 percent of the Air Force, these forces are already so small that resources saved in further downsizing would be outweighed by capabilities lost.

The above forces total about 60 percent of Air Force personnel, leaving 40 percent in the training, installation support, logistics, and research and development that underpin combat capability. This may appear to be a logical place for additional risk; the Air Force, however, has already drawn savings from this well.

We have achieved our efficiency goal of over $3 billion in FY12, and planned savings will increase each year to $42 billion total by FY16 – a twelve-fold increase. We cut planned growth in civilians by 16,000 personnel, cut the Air Force headquarters by over 2,000 military and civilian authorizations, deactivated three headquarters, restructured the Air Force Materiel Command, consolidated several Field Operating Agencies, and reduced our AF Band program by 27 percent. We have also set goals to reduce contract services and achieve greater energy savings. The Air Force is tracking efficiencies in no fewer than nine categories and will look for more; but future budgets are already leveraged with planned savings not yet fully realized.

One area where potential savings have not been fully exploited is installations. We need Congress to approve another round of base closures to help consolidate scarce maintenance and repair resources in a more efficient basing structure.

There is great synergy and interdependence between active, guard and reserve forces. Over the past 25 years the active portion of the Total Force has dropped from roughly 78 to 66 percent, so it is becoming more critical to find the right balance. If too much force structure is in the active duty, then we do not benefit from the lower cost of operation in the reserves. If too much force structure is in the reserves, then guardsmen and reservists need to deploy more often – even in peacetime – breaking the model of a part-time force.

Additionally, reserve forces depend on healthy active-duty forces from which trained and experienced Airmen transition to part-time status. If the active force becomes too small, the pipeline into reserve components will diminish. As this occurs, reserve components increase their recruiting directly into the part-time force and levels of experience fall.

We can no longer afford to address force structure issues in three separate stovepipes. It is essential that we holistically manage the health of the Total Force. More than ever, we are committed to working with our Guard and Reserve partners to strengthen our integration of effort.

We are increasing the number of units that partner active-duty, Guard or Reserve Airmen at a single location, growing such “unit associations” from 100 to 115. Already a success story for mobility forces, every US-based fighter unit is now planned for an association, as are the ten locations planned for the new KC-46 tanker. We will continue to refine this winning combination of active and reserve forces.

With few exceptions, the Air Force is now sized and structured to meet the requirements outlined in the new defense strategic guidance. We have stretched the risk we can prudently take from efficiencies in our support functions, and we are pushing to get the most combat power possible through the right balance of closely integrated active, guard, and reserve forces.

Today’s Air Force has very few options for further reductions in force structure without incurring significant risk to the capabilities we provide to joint and coalition forces.

This is the second of four op-eds written by Sec. Donley exclusively for Breaking Defense. Click here to read the whole series.