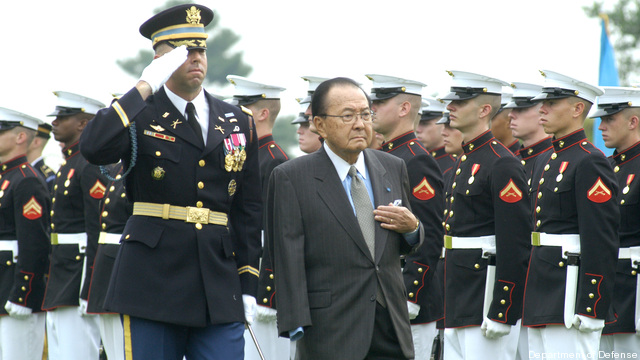 WASHINGTON: Navy Secretary Richard Spencer has asked legislators to repeal an obscure statute that he says hinders Navy readiness in the Pacific, where accidents this summer killed 17 sailors. Armed Services committee leaders seem receptive, but it’s the appropriators who’ll have to change the provision in question, which was written by their late, great chairman Daniel Inouye to protect the independence of the Pacific Fleet from higher Navy headquarters. And this battle will be just a preview of the wider war next year over fundamental reforms the Navy wants to the Goldwater-Nichols Act and military personnel laws.

What’s at stake right now? Back in 2006, already under strain from two wars and a shrinking fleet, the Navy tried to centralize readiness functions under the newly created US Fleet Forces Command, which absorbed the old Atlantic Fleet. But when it came to the Pacific Fleet, based in Inouye’s home state of Hawaii, the war hero turned senator ensured it would retain control of maintenance, training, and the money that goes with them. His language, faithfully renewed with minor changes in every appropriations package since, even after his death in 2012, states that: 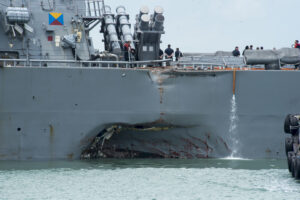 Released just yesterday, the Review argues for clearer lines of authority over readiness and for separating readiness and operational command. If the same admiral is responsible for both getting ships ready and meeting the insatiable demand for forces, the argument goes, he’ll be constantly tempted to cut corners on readiness to get more ships to sea. That is in fact what happened to the Japan-based 7th Fleet, where — before the fatal collisions — ships routinely sailed with waivers for a third of their required readiness certifications. An independent readiness authority like Fleet Forces command could have taken a stand against such shortcuts.

The review didn’t explicitly say the Inouye language should be repealed, but Spencer lost no time in following up and making that clear. “One thing which didn’t come out specifically in the Strategic Review, but which he verbalized to the members (is that) he’d like to see the Inouye language…go away,” a congressional staffer told me. 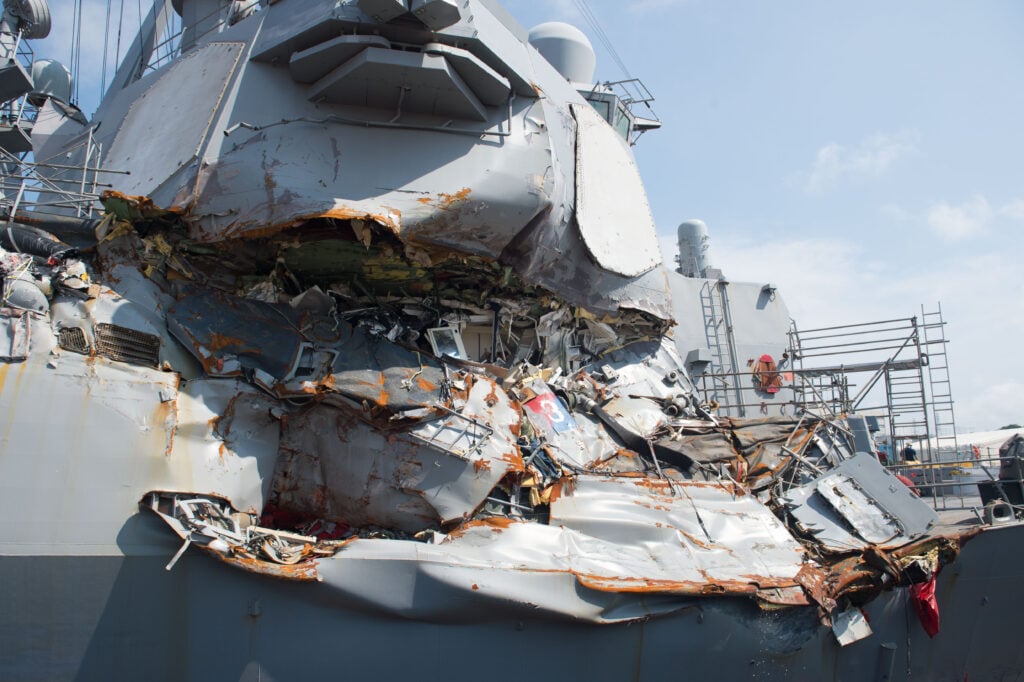 Strictly speaking, for the Navy to reorganize readiness in the Pacific, all the Congress needs to do is nothing. While the original Inouye language was a blanket prohibition, since 2017 the law has allowed the Navy to reorganize if it notifies the appropriators and they do not object within 30 days. But since Hawaii’s Sen. Brian Schatz succeeded to Inouye’s seat on defense appropriations, such a senatorial veto is likely enough that the Navy’s never tried to risk it. Behind closed doors, naval officials would complain about the statute, but they wouldn’t take a stand against it on the record — until now. 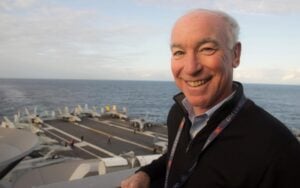 “The committee has actually inquired of the Navy, even before McCain and Fitzgerald and the other mishaps, whether or not that’s something they want to continue,” said Rep. Joe Courtney, ranking Democrat on the House seapower subcommittee. “The answer as recently as last February (was) we want to leave the status quo as it is.”

This time, Courtney told me, “the message I got from the secretary is that really is right for change, (and) the committee is very receptive to making that an issue.”

“The key for us is having the Navy come out,” the staffer said. “They’ve always kind of waffled.” Leading authorizers are receptive to Spencer’s request and will lobby their appropriations colleagues.

Will the insular appropriators listen? “We don’t operate in separate universes,” Courtney said. “There is a lot of byplay between the two committees. There’s a lot of respect between Mac (HASC chairman Mac Thornberry) and (defense appropriations chair) Kay Granger, and certainly at the staff level they talk to each other a lot… it’s going to become a priority to engage with the appropriators.”

What about the Senate appropriators, who originated this language in the first place? “Inouye was a very powerful senator. The Navy did not want to get at odds with him, (but) that has changed now,” the staffer said. Schatz simply doesn’t have Inouye’s clout — no one does, since Inouye chaired both the full appropriations committee and the defense subcommittee simultaneously — and this summer’s tragedies have given new urgency to the Navy’s requests.

Admittedly, the causal connection from an obscure organizational issue to the deaths of 17 sailors is not obvious, and it had one of our sources scratching his head. But legislators are likely to give the Navy the benefit of the doubt on the Inouye language. It’s too late to amend the appropriations bill for fiscal 2018, said Courtney, but there’ll plenty of opportunity next year. 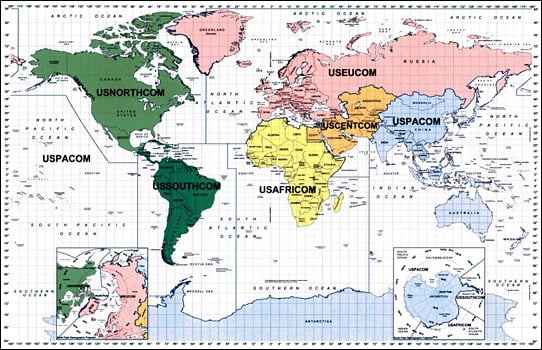 As for wider legislative changes, while they’ll be more contentious, no less a figure than Senate Armed Services chairman John McCain has been pushing Goldwater-Nichols reform for years, although he is now ailing. The House side has come along on McCain’s crusade, but cautiously.

“Everybody understand that Goldwater-Nichols is still the rules of the road,” said Rep. Courtney. “The jointness philosophy is going to continue to prevail.” But legislators are certainly open to “surgical” changes that leave the essence of the law intact, such as reducing joint staff assignments so naval officers can spend more time at sea, learning how to sail and fight.

“I don’t think the secretary was calling for sweeping fundamental changes of Goldwater-Nichols, but I think he does believe the surface warfare officers need more time at sea and they need more time driving ships,” said Courtney. “The committee really needs to listen.”

The nuclear-powered supercarriers Roosevelt, Reagan, and Nimitz sail side-by-side in a rare three-carrier exercise in the Pacific.

As for changing the supply-and-demand relationship between the joint force and the services, Courtney was non-committal, but he emphasized the Navy was overstretched and needed relief. With the number of ships deploying at any given time staying about 100 even as the fleet shrank from 594 in 1987 to 279 today, “something’s got to give,” Courtney said. “I really give the secretary a lot of kudos that he’s willing to take on these issues, which are probably going to take on some toes.”

“This report is about more than just budgets,” Courtney told me. “It’s a recognition that has to some structural change in how the Navy operates.”

The bigger problem may be in the Pentagon. The Strategic Readiness Review called into question the division of authority between the services and the Joint staffs — both in the Pentagon and in combatant commands around the world — which was set in 1986 by Goldwater-Nichols. Spencer has said repeatedly that the Navy must be able to say “no” to joint commanders’ insatiable demands for forces. But neither said specifically what statutes must change how. And it’s the Joint Staff and the Office of the Secretary of Defense that must approve any Navy legislative proposals before they go to the Hill.

“The institutional resistance from the Joint and OSD worlds will be considerable,” said Bryan McGrath, a retired Navy commander now with the Hudson Institute. “The review’s identification of the degree to which joint duty requirements come at the expense of core service competencies was spot on,” he told me, but changing Goldwater-Nichols and other laws will be “very hard.”

“The bottom line here is that this report is a narrative of post-Cold War decline, (and) it advocates returning to Cold War seriousness about readiness and seapower,” McGrath said. “The re-emergence of great power competition confronts us with the inadequacy of our ‘efficiency over effectiveness’ Navy, and it is essential that we reverse this decline. Winter is coming.”