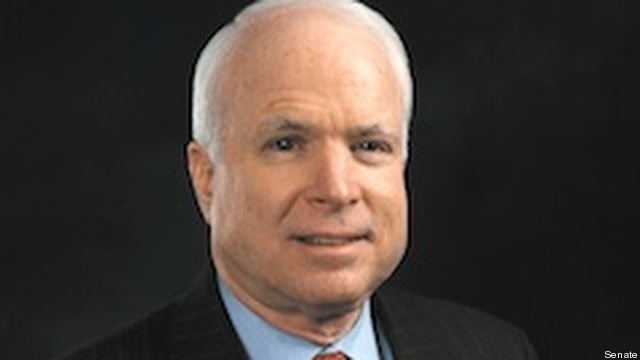 WASHINGTON: Sequestration and other Pentagon budget woes have been complicated by “neo-isolationists on the far left and far right, and members who are out of touch with what is going on in the world,” Sen. John McCain told several hundred journalists and defense industry officials today.

America needs lawmakers “who understand we live in a very dangerous world,” McCain said at a conference this morning put on by McAleese & Associates and Credit Suisse. [Click here for full coverage] A longtime and dedicated supporter of the authorization process by which defense policy is set by the Senate and House Armed Services committees, McCain said Capitol Hill must return to regular defense budget approval. That means passing a defense appropriations bill every year and passing a defense authorization bill every year. But that won’t happen until the current pattern is broken.

The key to breaking the cycle of the last five years of congressional dysfunction is probably a “grand bargain” deal that solves sequestration and stops the recurring tale of stalemate and inaction, McCain said.

And the veteran GOP senator said he saw signs of hope, citing last week’s dinner with President Obama and the president’s plan to visit the Hill again this week. A senior administration official agreed that there’s been a change in tone heard on the Hill, one that reflects rationality and desire for compromise more than the mindless partisanship we’ve seen over the last four years.

One thing helping that shift is something McCain noted. “There is a growing appreciation amongst members of Congress about the low esteem in which we are held,” he said, noting members rank below colonoscopies in terms of popularity. With an approval rate of 11 percent, about the only people who still think members of Congress are worthwhile is “down to paid staffers and blood relatives.”

But the chasm between the Senate, where rationality and comity are more common attributes, and the House, where neo-isolationists in both parties and deeply irrational partisans are more common, makes a deal difficult. Case in point: the Senate Appropriations Committee’s version of the Continuing Resolution released last night. McCain noted that the House version includes earmarks “and special interest set-asides” for 59 programs worth $6.4 billion. The Senate bill includes no earmarks. The Senate usually wins these funding battles in the long run, but that “grand bargain” may have to come first.