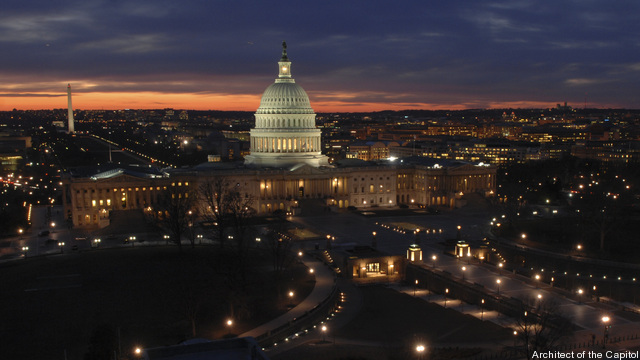 WASHINGTON: The defense spending bill passed by the Senate Appropriations Committee today keeps Block 30 Global Hawk drones flying, instead of letting them be warehoused as the Air Force had planned, a congressional source confirmed to Breaking Defense. That is arguably the final flourish on Congress’s utter rejection of the Air Force’s proposed cuts in the 2013 budget. The bill passed by a vote of 30-0.

Breaking Defense plowed through 300 pages of report language released to the press this afternoon and picked out new details about winners and losers. But all of this detail might be overtaken by events.

First, House and Senate leaders agreed Tuesday to punt on the usual appropriations process and run the government off a continuing resolution from September to March. A continuing resolution simply means that the government will continue spending (hence the name) on all programs at the prior year’s level, plus or minus a few percent. That said, the authors of a CR can and do make adjustments (known formally as “anomalies”) to incorporate the appropriators’ work.

The second looming shadow is sequestration, the automatic, across-the-board cuts that under current law take effect on January 2nd, although there is tremendous uncertainty over how they would be implemented and tremendous efforts to head them off altogether — a bitterly contentious topic that dominated this morning’s meeting of the Senate appropriators.

And of course, even in the normal course of legislative business, the bill the Senate Appropriations Committee passed still has to go to the Senate floor and then to conference with the House, potentially being altered at each point.

Nevertheless, even if the exact figures may change, the appropriators’ report language provides a useful window on the political momentum the services and their top programs have on Capitol Hill.

The Air Force won by losing. The appropriators rejected its proposed force structure cuts, so they gave the service $800 million to keep flying aircraft it wanted to retire, including the Global Hawks, the C-27 Spartan transport, and a host of Air National Guard units. The appropriators rejected the Air Force’s plan to terminate the Space Test Program and the Operationally Responsive Space Program, so they gave the Air Force $135 million to keep them going. Then there was the service’s punishment for screwing up the oxygen system on its high-end, high-tech, high-cost F-22 fighter: Being given an extra $21.5 million to fix it.

Appropriators also added $90 million to the program to develop a hypersonic weapon to hit targets around the world — with non-nuclear warheads — called Conventional Prompt Global Strike. They added almost a billion to various missile defense programs, from the Army’s Patriot missiles to the Israeli “Iron Dome.”

The biggest winner in the bill is the Navy, as we’ve previously reported. The Senate added an extra $2.4 billion to keep operating ships the administration had proposed to retire. The report details additions totaling another $2 billion to the president’s request to build new ships, specifically a DDG-51 destroyer and advanced procurement for a Virginia-class submarine and an amphibious ship. The report language also details $60 million plus-up for advance procurement of additional EA-18G Growler electronic warfare planes, forestalling the Navy’s plans to shut down production. The Senate also gave the Navy an additional $97 million to upgrade a Mobile Landing Platform, a kind of self-propelled floating pier, into a full-fledged “Afloat Forward Staging Base.” And there was an $89.7 million increase for logistics-ship programs of the National Defense Sealift Fund.

One big rebuff for the Navy: The appropriators thought the Navy’s plan to enlarge the Virginia-class submarines — by inserting a 93-foot-long “Virginia Payload Module” (VPM) in the middle of the current hull design– was ill-defined and risky, so they slashed it 90 percent, from $99.9 million dollars to $10 million.

Then there’s the Army, which the report specifically chided for its “endemic acquisition problems.” The Army lost $453 million from its badly delayed battlefield communications network, the Warfighter Information Network – Tactical (WIN-T) — $347 million from procurement of the current WIN-T Increment 2 and a $106 million from development of the more advanced Increment 3. Nevertheless, appropriators were largely positive about the service’s new approach to improving its digital systems through a six-month cycle of “Network Integration Evaluations,” although the report was full of suggestions and requests for more information.

The Army also lost $104 million from its MQ-1C Grey Eagle UAV, which had problems in testing, and $70 million from upgrades to its AH-1 Apache attack helicopters, which had experienced cost increases the report called “unjustified.” On the upside for the Army, the appropriators added $70 million for development of the EMARSS (Enhanced Medium Altitude and Surveillance System) scout plane.

One mundane item that took a big hit: the various funds to pay for servicemembers and their families to move house from one base to another when they are reassigned, which the committee cut all told by 10 percent, $294 million dollars. The appropriators don’t want to make military life harder, though: They want to make it easier, by forcing the Defense Department to move its people around less. Constant moves are a major headache of military life — and a major disruption to military efficiency, since people often have to leave jobs just as they’re getting good at them — and the committee wants the Pentagon to lay out a plan to keep servicemembers in each assignment longer.