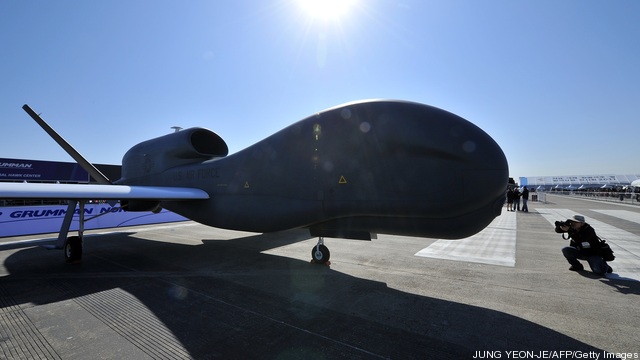 WASHINGTON: A blockbuster deal to sell the Air Force’s advanced Global Hawk aerial drone to South Korea has been put on ice for now, according to government sources in Seoul.

Military leaders from the Asian nation scuttled the nearly $400 to $800 million deal for four Global Hawk aircraft when negotiators from Washington and Seoul could not agree to a final price for the planes, according to a recent report by the Yonhap News Agency. Seoul now plans to draft a new acquisition plan to fill their unmanned aerial requirements, a government source said. South Korea will look AeroVironment’s Global Observer and Boeing’s Phantom Eye along with the Global Hawk as part of that new plan, according to the government source. Suspension of the Global Hawk buy comes days after defense giant Lockheed Martin announced plans to pitch the F-35 Joint Strike Fighter in South Korea’s fighter competition.

The Global Hawks were originally going to cost the South Korean government roughly $379 million, including the associated ground systems, spare parts and other materials. Those planes were scheduled to enter the South Korean arsenal in 2015. But revised cost estimates released in September by the Pentagon had the cost closer to $800 million. Under that new price, the South Korean military simply could not afford to buy the the advanced intelligence, surveillance and reconnaissance drone from the U.S. Later that month, Northrop revised their offer that was “more realistic” and eliminated “some factors that where there were some uncertainties,” a company official told Breaking Defense in September. But that last ditch effort was apparently to little, too late to salvage the deal.

Even if Northrop is unable to land the South Korean deal, the Global Hawk has already piqued a lot of interest among a number of countries, particularly in the Pacific. Japan and Australia are reportedly gathering details on potential quantities and cost for a Global Hawk sale. Japan recently agreed to become the newest partner in the F-35 program as well. Northrop officials are also in the final stages of closing a deal with NATO, in which the alliance will use the Global Hawk as the basis for its new Alliance Ground Surveillance program. American aerospace firms have been looking more and more to foreign markets to flesh out their bottom line. As national security coffers in the U.S. begin to shrink, countries like Japan and South Korea will become bigger players in the international arms market.