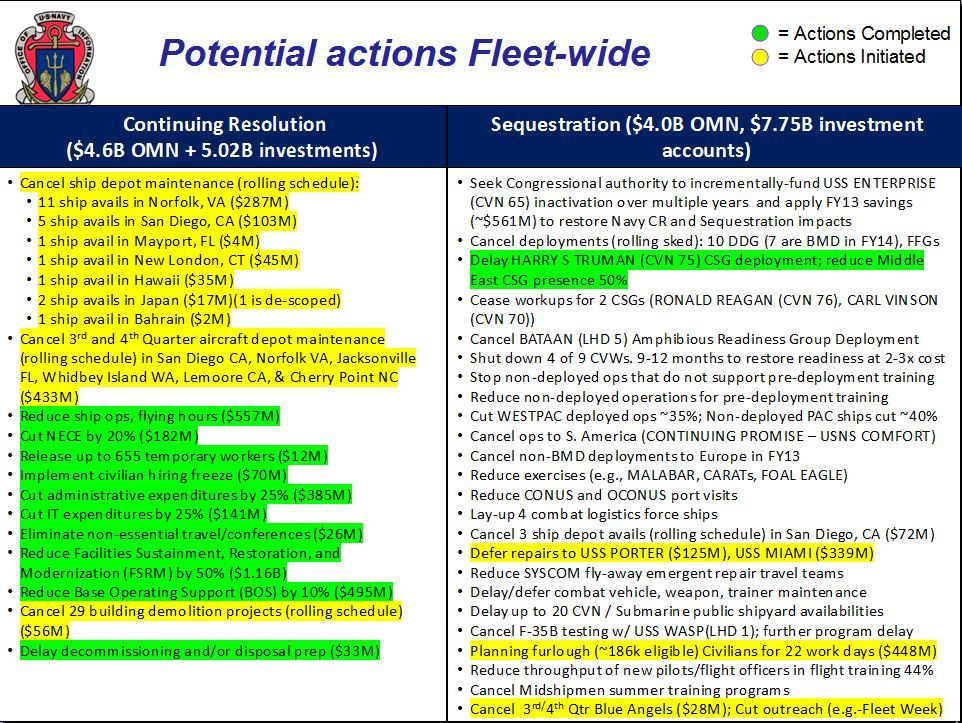 WASHINGTON: “We still even today hold out hope that there will be a solution, that Congress can solve this.” That’s the word, as startling as it is, from the Navy’s senior spokesman, Rear Adm. John Kirby, on the day before the automatic cuts called sequestration are scheduled to kick in. But as Kirby, the Chief of Naval Information (CHINFO), explained this morning – and for that matter as Army officials told reporters yesterday – the ongoing budget disaster is less a sudden drop over the much-hyped “fiscal cliff” and more of a long and painful roll down a steep and stony slope, hitting rocks all the way. (Click the image above to see Kirby’s briefing slide detailing Navy cost-cutting measures taken, in progress, and impending).

“Tomorrow, the sky’s not going to fall,” Kirby told reporters after his formal remarks to the Navy League, “but we’re going to start to see it erode and eat at readiness over time. It may be months before we can see the full effects.”

Conversely, the military has already started cutting costs in anticipation of both the sequester and a year-long extension of the Continuing Resolution. The CR is the act funding the federal government in the absence of a proper appropriations bill, but it sets spending at 2012 levels without allowing agencies to start new programs or adjust existing ones. To accommodate both the sequester and the CR, the Navy has felt compelled to cancel the deployment of the aircraft carrier USS Truman to the Persian Gulf, halving the number of carriers keeping an eye on Iran, and to defer maintenance in ways that are likely to cost more in the long run. On the upside, the controversial Littoral Combat Ship, LCS-1 Freedom, is sailing for Singapore on Friday as scheduled.

While sequestration starts tomorrow, the cuts will be implemented over the remaining seven months of the fiscal year. The current CR expires March 27th, at which point Congress must either extend it, pass proper appropriations, or let the government shut down.

So there are plenty of unknowns and plenty of opportunities for Congress – and the White House, which must sign any legislative fix – to make things either better or even worse. That means the military, and its contractors for that matter, can’t just make a plan and stick to it.

Instead, there’ll be a “rolling schedule” of cuts, Kirby told the Navy League, with the service holding off on any irreversible decisions until the last possible moment in the hopes political leaders might actually do something.

For example, the Navy currently plans to cancel major maintenance on two dozen warships, but “that doesn’t mean they’re all going to be cancelled on March 1st,” Kirby said. The service will cancel the earliest overhauls first, “the others we’ll wait to see if there’s some budget relief.”

“We want to preserve flexibility,” Kirby told the Navy League. “We’re not going to make decisions before their time.”

The simplest thing the Congress and the President could do is agree to give the military more flexibility in spending the money it does have, “reprogramming” funds from lower-priority programs or accounts in surplus to cover its urgent most needs. “Some transfer authority would help us get through fiscal year ’13, no question about it,” Kirby said, “but it isn’t a panacea, and it’s not going to help us in ’14.”

Kirby acknowledged that the military’s effort to warn political leaders and the public about the fiscal impacts has itself inspired controversy, with accusations that the brass are “fearmongering.”

“Yes, I have been very aggressive talking about the impacts of sequestration and a year-long Continuing Resolution, and I make no apologies for that,” Kirby told the Navy League.

“All we can do, all I can do, is continue to talk about it and explain it and continue to make it as local as possible — not to scare people but simply to let them know… so they can see for themselves, here’s how many jobs are lost in your town or your district,” Kirby told reporters after his public remarks.

But given the opaque complexity of Washington’s self-inflicted fiscal crisis, has the public really gotten the message? “We obviously hope the American people understand the impacts to national security,” Kirby told reporters. “To the degree they don’t, that’s our job.”