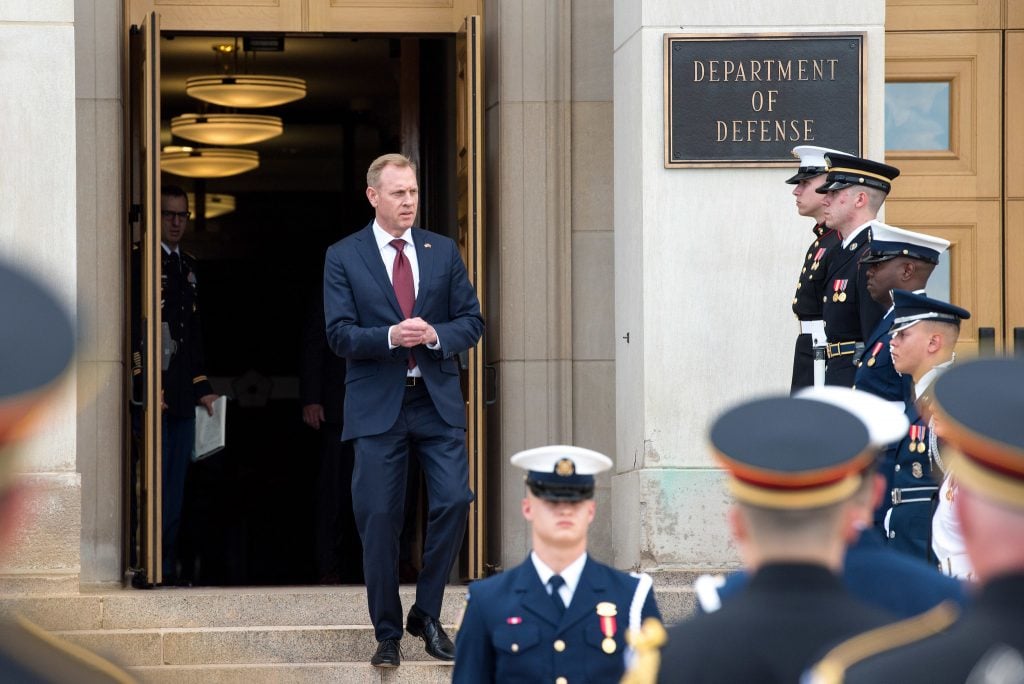 Acting Defense Secretary Patrick Shanahan at the Pentagon on May 7, 2019.

WASHINGTON: The longest acting defense secretary in US history has finally and officially been nominated for the job.

Patrick Shanahan, a 30-year Boeing executive with no prior government experience before coming to the Pentagon in 2017, will now start preparing to face the music on Capitol Hill, where he has received a pretty mixed reception during his 17 weeks as Acting Defense Secretary.

Since taking over from Jim Mattis on Jan. 1, after the former Marine general resigned due to differences with President Trump over Syria policy, Shanahan has mostly held the line on policies already in place, keeping an emphasis on modernization and the National Defense Strategy released last year.

The nomination comes at a challenging time for the Pentagon as the Trump administration ramps up pressure on Iran and Venezuela, while keeping an eye on a new round of ballistic missile tests in North Korea and scrambling to maintain the US military advantage over China and Russia. Over the past year, Shanahan has also pressed the case for standing up a Space Force, while managing almost 25,000 US troops deployed in Afghanistan, Iraq, and Syria.

That is a full plate for any policymaker, but particularly one who had had no relevant foreign policy or military experience since becoming Mattis’ deputy less than two years ago.

It is unclear when Shanahan’s confirmation hearing before the Senate Armed Services Committee will happen, but it is has the potential to be something of a bruising affair, as he has at times struggled to answer lawmakers’ questions, drawing sharp rebukes.

Earlier this year, Shanahan was dinged by a surprising source, Republican Sen. James Inhofe, chairman of the Senate Armed Services Committee, who mused Shanahan does not share the “humility” that Mattis exemplified, which the senator has repeatedly praised. “He (Mattis) had a very rare quality, humility, that I would like to see rub off.”

On Thursday, Inhofe offered lukewarm support for Shanahan, however. “I’m pleased that President Trump will nominate Patrick Shanahan to be the next Secretary of Defense. We need a confirmed leader at the Department and, after working with him closely over the last few months, I welcome his selection.”

Other members of SASC may not be so accommodating. Two members of the committee, Kirsten Gillibrand and Elizabeth Warren, are running for the Democratic nomination for president, and other Democrats like Tim Kaine, Tammy Duckworth, and Ranking Member Jack Reed have been staunch critics of the Trump administration and its policies.

Six Democratic members of the SASC sent a letter to Shanahan last month saying they are “extraordinarily distressed” about the potential to damage military readiness the military’s new role on the border might present.

On Wednesday, Shanahan told lawmakers the Pentagon has redirected enough money to build 256 miles of barriers along the southwestern border. The work is part of the $3.6 billion in military construction funds shifted for the project, which has attracted criticism from both sides of the aisle in Congress.

Unlike his predecessor, Shanahan has shown little appetite for disagreement with the White House, although some of that could be the product of his angling for the job on a permanent basis, combined with the fact that acting officials have less pull than do those who’ve been confirmed. “We are not the Department of No,” Shanahan told Pentagon officials after Space Force was announced last year, and he has quickly funneled money originally slated for military construction to Trump’s border wall.

When it comes to the Space Force, experts see little change in policy.

“I don’t think it’ll change the trajectory for Space Force; he’s been the face of this proposal thus far and will undoubtedly get questions on it during confirmation,” said one defense industry source. “I’d think the continuity thru this particular NDAA and appropriations cycle will be important.”

But Shanahan’s decades as a Boeing executive have caused problems. The nomination comes days after the release of an Inspector General investigation which looked into alleged violations of his ethics agreement meant to place a firewall between him and decisions about Boeing, his former employer. Shanahan was cleared of any wrongdoing.

White House Press Secretary Sarah Sanders said in a statement that Shanahan’s nomination was “based on his outstanding service to the country and his demonstrated ability to lead” the Pentagon.

On Twitter, Shanahan thanked the president for having confidence in him: “If confirmed by the Senate, I will continue the aggressive implementation of our National Defense Strategy. I remain committed to modernizing the force so our remarkable Soldiers, Sailors, Airmen, and Marines have everything they need to keep our military lethal and our country safe.”