Shrinking Army, Trying To Handle Everything, Spreads Itself Thin 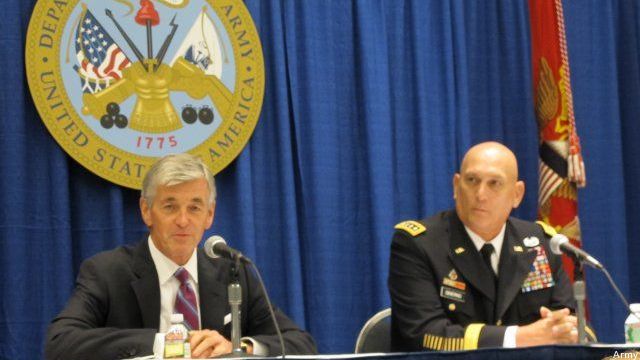 AUSA: What will the Army do after it gets out of Afghanistan? A little of everything, said senior leaders — with equal emphasis on both “little” and “everything.”

The Marines talk of returning to their expeditionary, seaborne roots; the Air Force and Navy tout AirSea Battle against dense Iranian or Chinese “anti-access/area denial” defenses; but the Army, for good or ill, resolutely refuses to distill its future vision into a single concept.

“We’re not going to have bumper stickers,” Army Chief of Staff Gen. Ray Odierno told reporters Monday at the annual meeting of the Association of the US Army. “We’re going to need the capability for the ground force to be part of whatever we want to do [as a military].”

“What I’m focused on is having an Army that can deploy at several speeds, that can deploy at several sizes, and that can respond to several different contingencies,” Odierno explained. In other words, after a decade of deploying brigades in a steady cycle to fight the counterinsurgencies in Afghanistan and Iraq, the Army needs to relearn how to dispatch smaller forces to a wider and less predictable array of missions around the world.

As the Army looks beyond Afghanistan — the de facto theme of this AUSA meeting’s focus on “the future” — the service simultaneously wants to get on board with AirSea Battle for the high-tech fight, respond to regional brushfires for theater commanders with “regionally aligned” forces, and build close relationships with friendly forces around the world.

The virtue of this broad agenda is that it doesn’t put all the Army’s bets on one scenario, the way it ignored counterinsurgency to focus on tank battles during and after the Cold War. The danger to the service and to the nation is that it spreads the Army pretty thin.

“There really weren’t too many places we could economize in our mission profile,” said Todd Harvey, principal director for force development in the Office of the Secretary of Defense, at a panel later that day at AUSA. As OSD worked on the new strategic guidance rolled out in January, they couldn’t find anything that “we might be able to jettison from our workload so you could focus” on a few top priorities, he said. So in the future, Harvey said, the Army in particular will be “trying to stretch a shrinking force across at least as much mission as we have today.”

As a result, the service needs to be “disciplined,” Harvey went on, rather than try to “plant a flag in every country” in the name of partnership-building: “Smaller, distributed teams are going to be the way we do these kinds of outreach and engagement activities in the future.”

“You’re not going to put an entire brigade combat team into any nation in Africa,” agreed Lt. Gen. Keith Walker, deputy commanding general for “futures” at the Army Training and Doctrine Command.

Instead, the largest service needs to make more use of its smaller pieces, explained Lt. Gen. John Campbell, the Army’s deputy chief of staff for operations, plans, and policy. “Our active duty and our [National] Guard BCTs [brigade combat teams] are a very small portion of our overall force; we lose sight of those other enablers,” he said. “Don’t think just in terms of BCTs and large formations, think about squads.” So the Army is increasingly emphasizing its ability to deploy small, custom-tailored, but “scalable” forces — that is, detachments that can start small and then be reinforced as needed as the mission grows or conflict escalates.

But that kind of retail mission is not nearly as sexy or budget-boosting as the wholesale high-tech clash envisioned by AirSea Battle, and the service’s leaders were quick to emphasize they had a role there too.

“AirSea Battle is much greater than any two services,” declared Army Secretary John McHugh, speaking to reporters alongside Odierno. “The Army is a full partner in the AirSea Battle office at OSD, [where] we have full time manning through the G-3/5/7 [staff]” — something the Army had initially declined to do when the Navy and Air Force set up the AirSea Battle cell. “When it comes to AirSea Battle, there is an Army role and we’re actively pursuing it,” McHugh said.

Added Odierno, “I get frustrated when people try to put it [as if] it’s AirSea Battle against ground forces, that’s not what it’s about.” Instead, what matters is “the right combination” of air, sea, and ground across all the services, he said, and “that’s on all of us to get that right.”

In high-end conflict in the Pacific, the Army tends to emphasize its role in missile defense and cybersecurity, not its capacity for large land clashes. But the service also keeps trying to redefine AirSea Battle away from the big fight to include the kind of military-to-military partnership building beforehand in which the Army, as the largest service, tends to take the lead.

“It’s more than just a battle concept; there’s a very important pre-[battle] phase,” said McHugh, “and that is building partnership capacity and building relationships as the chief talked about.” In the Pacific theater in particular, he emphasized, “working with the Mongolians, working with the Koreans, [with] nation after nation, it has been the Army.”

“Complexity may be an understatement,” TRADOC’s Walker said later. “It could be chaos.”

But hedging for everything requires resources, and right now there’s huge uncertainty about what resources the Army and every government agency will have to spend: The automatic budget cuts called sequestration are currently set to take effect on Jan. 2nd. “The actual exercise in which we are this moment is to trying to understand what kinds of flexibilities we may have” in implementing the sequester, said McHugh. “We have to best define what options we may or may not have within the sequestration law.”

For fiscal year 2013, added Odierno, “you really have no flexibility at all…. It’s a salami slice cut across every line item of our budget in 13.”

Before the nation’s largest armed service can start planning for the long term worldwide, it has to make it through the short term chaos in the nation’s capital.