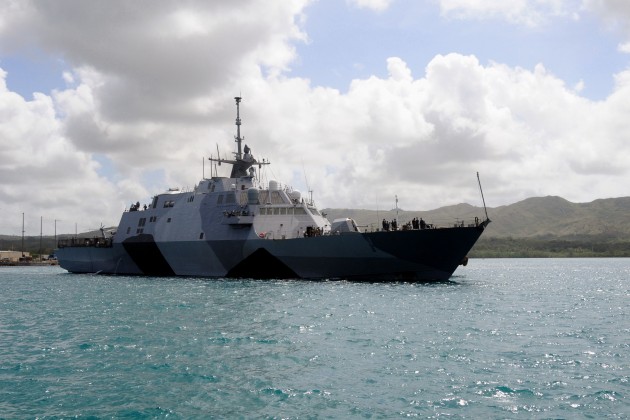 UPDATED with US Navy response

WASHINGTON: Some spectacular glitches marred the first overseas deployment of the Navy’s Littoral Combat Ship, including an electrical failure that left the USS Freedom “briefly” dead in the water. Now Breaking Defense has obtained an unpublished Government Accountability Office study of Freedom‘s Singapore deployment that raises more serious questions about a long-standing worry: whether the small and highly automated LCS has enough sailors aboard to do up all the work needed, from routine maintenance to remedial training.

By now, the Navy brass have surely gotten tired of GAO taking shots at LCS. But according to GAO, LCS sailors are getting literally tired of the ship: They averaged about six hours of sleep per day, 25 percent below the Navy’s eight-hour standard, and key personnel such as engineers got even less. That’s in spite of

The core crew’s engineering department in particular told GAO they had no idea how they’d keep the ship going without help from the mission module’s engineers. But the module the Freedom took to Singapore, the “anti-surface warfare” module that includes several small boats, has many more engineers than the forthcoming mine-countermeasures and anti-submarine warfare modules. In fact, while the entire 19-sailor anti-surface module crew has skills useful in running the ship itself, the MCM crew has only four sailors who could help, and the ASW module only one. That means an LCS outfitted to hunt mines or subs would effectively be 15 to 18 sailors short — about 20 to 25 percent.

GAO admits at least some of the problems are first-time-out glitches that affect any new ship. The Navy upped the Freedom core crew from 40 to 50 at the last minute, for example, so the 10 new sailors came in unprepared and required as much training time during the deployment as the other 40 put together. The service is also improving the LCS training program, which the entire crew found wanting, though a complete reform will take two to three years.

The Navy is also revising the LCS maintenance program for greater flexibility, less reliance on contractors, and more use of diagnostic sensors — already being installed on the USS Fort Worth, which will head to Singapore later this year — to allow “conditions-based maintenance” when parts show signs of potential failures, instead of having to manually check (for example) each of the ship’s 350 valves once a month. The new maintenance program should also fix simple mistakes like not having enough Internet connectivity for maintenance operations at the pier in Singapore.

Finally, Freedom‘s frequent mechanical failures stem in large part from glitchy equipment that has been replaced with more reliable models on other LCS ships. Not all these fixes can be retrofitted to the troubled Freedom, so the first-born LCS may remain the class’s problem child and a maintenance headache throughout its service life, more suited to training and/or hazing new LCS sailors than for overseas operations. But the rest of the Freedom class should function better — though GAO warns the fixes aren’t yet proven.

Even more worrying is that the Lockheed Martin-built Freedom represents only one of the two LCS designs: General Dynamics’ Independence class is entirely different — and that design has never been deployed abroad. Indeed, the Independence itself has spent much of its time testing prototype mission modules, so GAO feels there’s far too little data on how the ship itself holds up when it spends weeks on end at sea.

The Navy moved so fast on LCS that it has already contracted for 24 ships, 12 of each version, but Defense Secretary Chuck Hagel has cut the program at 32 ships pending an extensive review of alternative vessels, from a modified LCS to a new and tougher type of ship. While Hagel’s guidance emphasizes the LCS’s shortcomings in high-intensity combat, you can bet basic maintenance will get major attention too.

This afternoon, Navy spokesman Lt. Robert Myers provided us the service’s official response to our story:

“While I won’t speak to an unreleased, FOUO [for official use only] report what I can say is the Navy is continuously refining and testing the LCS program as we learn the full extent of possibilities for these first of a kind ships.  Each successive LCS commissioning is a testament to the hard work and experience gained from Freedom’s deployment to Singapore.  We have incorporated engineering modifications which improve performance and we continue to look at the concept of employment, as exemplified by the recent war game in Newport.”

Navy surface warfare director and LCS enthusiast Rear Adm. Thomas Rowden spoke to reporters recently about that wargame, in which 125 participants from all the services convened at the Naval War College specifically to test out new concepts for how to use the LCS in both peace and war. Some of the ideas Rowden mentioned were intriguing, such as pairing an LCS and an Aegis destroyer to hunt submarines in a team that looks to be more than the sum of its parts. But the Navy’s been able to provide very little detail because the in-depth analysis is just beginning.

One thing I was able to find out is that the wargame doesn’t seem to have any computer models or simulations of the LCS performance, with the outcome of combats between the “Blue” (US) and “Red” (enemy) teams being determined by human umpires known as the “White Cell.” So while the wargame was a great venue for exploring concepts, as Lt. Myers said, it doesn’t prove anything about the Littoral Combat Ship’s real-world performance.