Space Corps, What Is It Good For? Not Much: Air Force Leaders 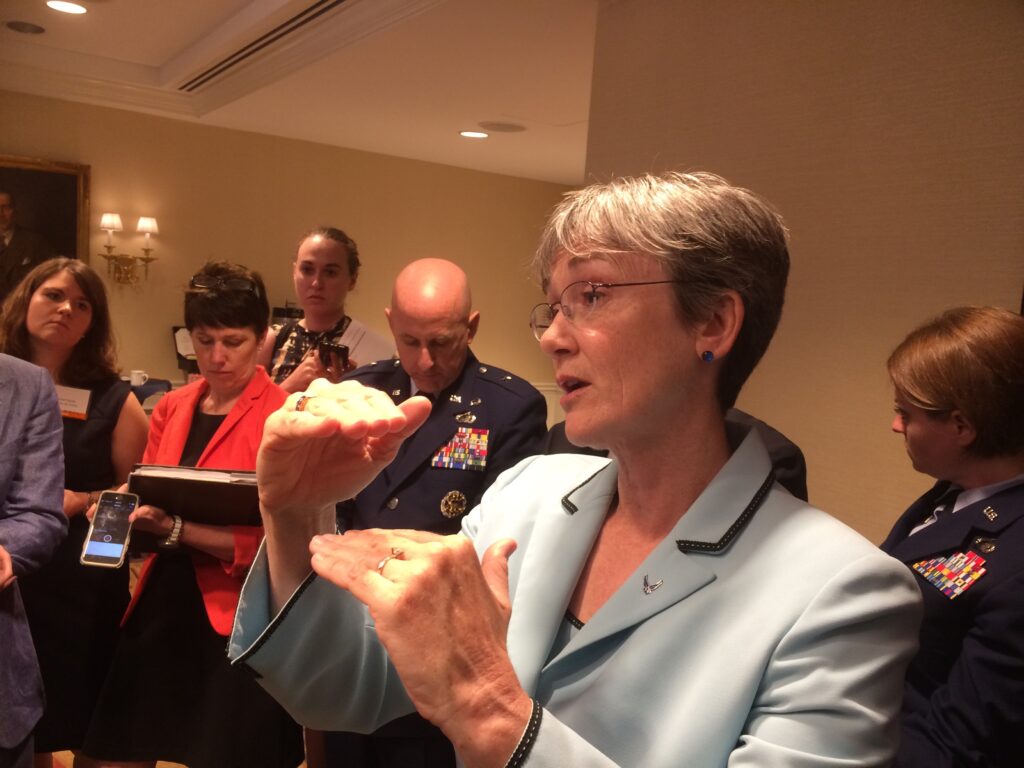 CAPITOL HILL: The nation does not need a new armed service specializing in space, the leaders of the Air Force said today in rejecting a House Armed Services Committee plan. In fact, they said, carving a “Space Corps” out of the Air Force — which handles most space missions today — would only make it harder to integrate space operations with warfare in the air, cyberspace, land, and sea.

“The Pentagon is complicated enough,” Air Force Secretary Heather Wilson told reporters. “This will make it more complex, add more boxes to the organization chart, and cost more money. And if I had more money, I would put it into lethality, not bureaucracy….I don’t need another chief of staff and another six deputy chiefs of staff.”

The brainchild of Strategic Forces Subcommittee chairman Mike Rogers, the HASC proposal would create the Space Corps as its own service with its own Chief of Staff sitting on the Joint Chiefs. The new Space Corps would be a separate uniformed service from the Air Force but would report to the civilian Air Force Secretary, who would oversee both Air Force and Space Corps acquisition. That’s similar to the longstanding arrangement whereby the Marine Corps is a separate service from the Navy but reports to the Navy Secretary. The Navy-Marine model proves such arrangements can work — but then the sea services have had since 1798 to work out the many bugs.

“We need to simplify, not make it more complicated and bureaucratic,” Wilson summed up. 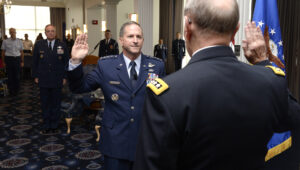 The Air Force Chief of Staff, Gen. David Goldfein, focused on the operational downsides.  “If you’re saying the word ‘separate’ and ‘space’ in the same sentence, you’re moving in the wrong direction,” he said. “The secretary and I are focused how do we integrate space.”

Making a separate Space Corps would complicate life not just for the Air Force, but for the Army, Navy, and Marines as well, Goldfein emphasized. “Every mission we perform in the United States military is dependent on space,” he said. “Now is not the time to build seams and segregate or separate. Now’s the time to further integrate.”

Goldfein is one of the military’s most senior advocates of multi-domain operations, in which new networks, doctrine, and training allow US forces in all five domains — air, sea, land, space, and cyberspace — to seamlessly combine their efforts, overwhelming the enemy from all directions. That’s hard enough with four armed services to coordinate: It would even harder with five, Goldfein and Wilson agreed.

Space Corps advocates would argue that space is too important not to have its own service. Just as the increasing importance of air warfare finally pushed the US to split the Air Force from the Army in 1947 — a generation after most European powers had done so — the growing threat of war in space requires us to split a Space Corps from the Air Force. Once seen as a adjunct to operations on Earth, as a matter for engineering rather than military art, space is increasingly seen as its own domain of combat, where advanced adversaries like Russia and China can attack our vital satellites. 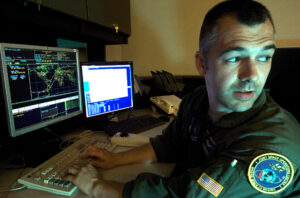 Goldfein argues now is not the time to split off a Space Corps precisely because the nature of war in space is changing. “Right now, we’re in this transition period, (moving from) looking at space (as) this benign environment in which you sense, monitor, and report, to a warfighting domain where you’ve got to fight and win to gain space superiority,” Goldfein said. “Right now as we’re making this transition, to get us anchored into a discussion about the organizational chart, while we’re right now trying to improve lethality and warfighting going forward, quite frankly would slow us down.”

Instead, the Air Force is working to enhance space operations within the current structure, for example by creating a new section of the Air Force staff, a 3-star deputy chief of staff for space designated the A-11.

“We announced a reorganization last week in the Air Force that integrates, elevates, and normalizes space operations, and that’s the direction we want to go,” Wilson said. (The idea was announced in April but the specifics were only settled recently, she clarified).

“There’s one other thing,” Wilson added. “This budget increases space funding by 20 percent. The thing we need most from the Congress is funding. The sequester was devastating to the Air Force as a whole and also to our space capabilities, so I think the most important question is, how do we fund what we need (to) change to a warfighting ethos… Org chart boxes is not the right question.”