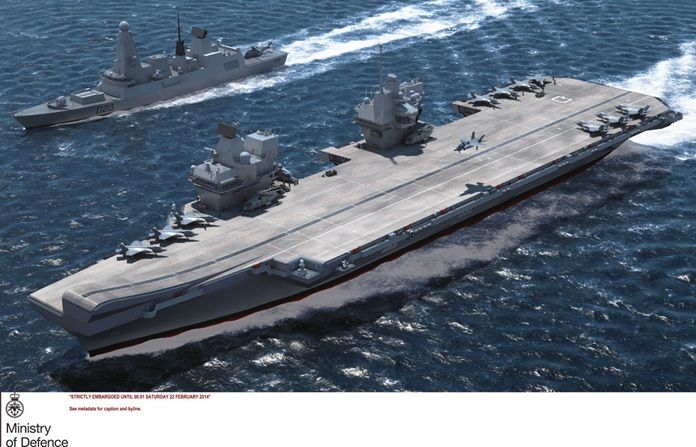 WASHINGTON: 65,000-ton ships are hard to turn around, and they can drag a lot else in their wake. That’s the $10.4 billion (£6.2 billion) bet the Royal Navy has placed on its controversial program to build two new aircraft carriers. While a third smaller than American nuclear carriers, the ships’ costs have grown so much that the British government is considering temporarily mothballing the second ship, HMS Prince of Wales, as soon as it’s complete, while the first ship, HMS Queen Elizabeth, was christened July 4th but won’t get its F-35B fighters for years.

But First Sea Lord and Chief of Naval Staff, Adm. Sir George Zambellas, assured a Washington audience Wednesday that — to paraphrase his guarded Britishisms into American bluntness — it’s too late to cheap out. Building the carriers has already committed British politicians not only to funding their operations, escort vessels, and aircraft, but also to a carrier-centered naval strategy that puts warfighting first and peacetime presence second.

If you don’t buy adequate F-35s, “you build £6.2 billion worth of carriers, you then don’t put a tiny piece of butter on the bread,” Zambellas said to general laughter at the Center for Strategic and International Studies. “You’ve got to do it properly. And I’m absolutely certain, with delivery of a credible carrier strike capability, we will see a growth of commitments to F-35s to meet the maximum value the government would want to derive from the strategic assets they have bought and are paying for [already].”

Likewise, the Sea Lord said, while carrier critics say the money would be better spent on a larger number of smaller vessels, the political and strategic realities are otherwise. “The truth is this, if you can’t afford carriers, you may not necessarily afford more ships, but if you’ve got the carriers, you may have to afford more ships,” Zambellas said, prompting more laughter. “So I think some of my predecessors were extremely wise.”

In brief, an aircraft carrier without aircraft isn’t much use, and a carrier without escorts won’t last long in combat. Zambellas is betting that current and future governments will feel compelled to “do it properly” rather than let their most expensive military assets languish under-used.

Economists might call this a “sunk cost” argument (a distinctly disturbing term in the naval context). So Prime Minister David Cameron may well decide in the 2015 Strategic Defense and Security Review (SDSR15) that having spent $10.4 billion on the carriers does not, in fact, oblige him to spend a penny more: After all, no amount of further investment will ever get the £6.2 billion back. In fact, largely because of delays in the US Joint Strike Fighter program, the HMS Queen Elizabeth will already spend its first two years in service equipped only with helicopters, not F-35s.

On the other hand, Zambellas is also attempting a “marginal return on investment” argument: Additional spending on aircraft and escort ships will yield a disproportionate increase in military power, because it leverages the investment already made in the carriers and uses them to the maximum extent.

The admiral acknowledged that the UK had already made some strategic sacrifices. To afford the carriers, as well as other high-capability, high-cost warships like Astute­-class attack submarines and Daring-class Type 45 air defense destroyers, the Royal Navy has retired large numbers of smaller vessels, ships arguably inadequate for a war with Russia or China, but perfectly serviceable for showing the flag, chasing Somali pirates, and building relationships with partners around the world. This trade-off echoes the decision of another First Sea Lord 110 years ago, Jackie “Scrap the Lot!” Fisher, to junk geriatric ships used for colonial patrols and invest instead in dreadnoughts and battlecruisers to face the rising power of Imperial Germany.

“You’ve completely got it,” Zambellas said when I summed up the trade-off. “You aim for high end and you accept the risk your footprint’s reduced globally… I absolutely reject the idea of an ostensibly [larger] number of smaller platforms that might have a wider footprint.”

Yes, the Sea Lord said, the UK could invest in what’s called a high-low mix, buying many cheap ships suited to “constabulary” operations off Somalia and a few expensive ships in case of major war. “The danger with that is when you are needed to perform a high end — and therefore a strategically valuable — task alongside a partner, you find that your low-end capability doesn’t get through the gate,” Zambellas said. “You lose out on the flexibility and authority associated with credible platforms.”

“Authority” and “credibility” were the admiral’s mantras throughout his remarks, which were tinged with the usual post-imperial anxiety about Britain’s place in the world. If only one carrier is operational, Zambellas said in one example, it may be in refit when a crisis erupts, “and then your authority sort of drains away down the plug hole.” Building the carriers is “a grown-up statement of intent,” he said, the UK’s forthcoming nuclear missile submarines will provide “deterrence [at] absolutely the top end of the game,” and the US and UK needed to operate as one in the Persian Gulf “so if we have to fight side by side, we Brits don’t let you down.”

Overall, Zambellas said after listing the Royal Navy’s investments in high-end warfighting capability, “I don’t think that sounds like a small northwest European nation in decline.”

The painful truth is that Great Britain is no longer a great power. But it still stands far above the many US partners that can only provide peacekeeping forces. The US Navy itself is struggling to afford 11 aircraft carriers and to deter Russia, Iran, and China all at once. In a crisis, a high-end ally with a couple of carriers just might tip the balance.