The End Of The American Way of War; The Cold War Really Is Over 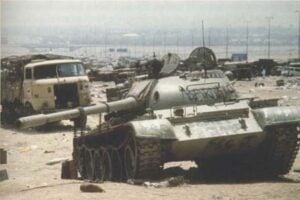 Iraqi vehicles on the “Highway of Death” in 1991

The American way of war — using overpowering industrial might, crushing firepower, and owning the sea and skies — may have come to an end, a top Pentagon official says.

For the past two decades, “the Chinese and the Russians have been working to undermine that model,” said Elbridge Colby, deputy assistant secretary of defense for strategy and force development. By spending billions on modernizing their militaries and fielding new technologies like artificial intelligence and hypersonic missiles at a faster clip than the Americans, the two countries have changed the way the United States must approach future conflict.

“I want to really stress that everything should be circled back to what the problem statement is, what the problem definition is, which is defeating the Chinese or Russian potential theories of victory,” Colby told an audience at the annual directed Energy Summit, co-sponsored by Booz Allen Hamilton and the Center for Strategic and Budgetary Assessments. The answer, as much as there is one, will be found in a combination of technology, training, and doctrine, “but we should be taking initiative. They’ve gone after our theory of victory? We should go after their theory of victory so we have a better deterrent.”

One of the architects of the Pentagon’s National Defense Strategy, which underscored the view that Washington has entered an era of “long-term strategic competition” with Moscow and Beijing, Colby used his remarks to lay down a a series of challenges for defense industry types in the audience.

The traditional method of slowly testing and evaluating new technologies for year, or even decades, “ain’t gonna work any more…we need to change,” he said. Chinese and Russian defense officials don’t keep such long development schedules, and the U.S. tech industry has scoffed at working with the Pentagon thanks in part to the cautious, time-consuming schedules so anathema to tech Silicon Valley entrepreneurs. Taking decades to field aircraft like the F-35 or Ford-class carriers might provide long-term stability, but “it doesn’t matter if we’re stronger in the global context if we lose in the Pacific or Europe” tomorrow, Colby warned.

To the defense industry, Colby said bluntly, “we’re not interested in something that’s kind of a whiz-bang thing that’s not connected to a plausible deployment or not nestled within operational concepts. We do want to encourage breakthrough and creative, kind of, activity and investment in technology, but it’s got to be something that we can actually use.”

To underscore the Pentagon’s concerns with today’s challenges from peer competitors, on Tuesday Taiwan scrambled several warships and aircraft to monitor Beijing’s aircraft carrier, the Liaoning, after it entered the Taiwan Strait.

The move comes about a week after Pacific Command chief, Adm. Harry Harris, told a Senate panel that the removal of term limits to allow Chinese President Xi Jinping to stay in office indefinitely should be seen as a warning sign of more provocative action in the South China Sea and elsewhere.

Harris, President Donald Trump’s nominee to become ambassador to Australia, said China seeks regional hegemony and to force America out of the region. China is investing heavily in hypersonic missiles, fifth generation aircraft and upgunning military sites on fake islands in areas claimed by other countries in the South China Sea, and is pouring record amounts into its military buildup.

During a Senate Armed Services Committee hearing on Tuesday, Sen. James Inhofe (the likely next chairman of the committee) asked Gen. John Hyten, head of Strategic Command, “if that happens, what kind of defense do we have against hypersonic threat?”

Hyten, worryingly, wasn’t sure. “We have a very difficult — well, our defense is our deterrent capability,” he said. “We don’t have any defense that could deny the employment of such a weapon against us, so our response would be our deterrent force, which would be the triad and the nuclear capabilities that we have to respond to such a threat.”

The Pentagon has called for the development of so-called “low yield” nuclear weapons that can be launched from submarines to meet the lower Russian threshold for the use of nuclear weapons.

Underscoring Colby’s concerns, Democratic Rep. Tim Ryan, told today’s summit, “no one can sit in the classified briefings I do and learn what our adversaries are doing right now, and not feel a keen sense of urgency to invest in these technologies.”