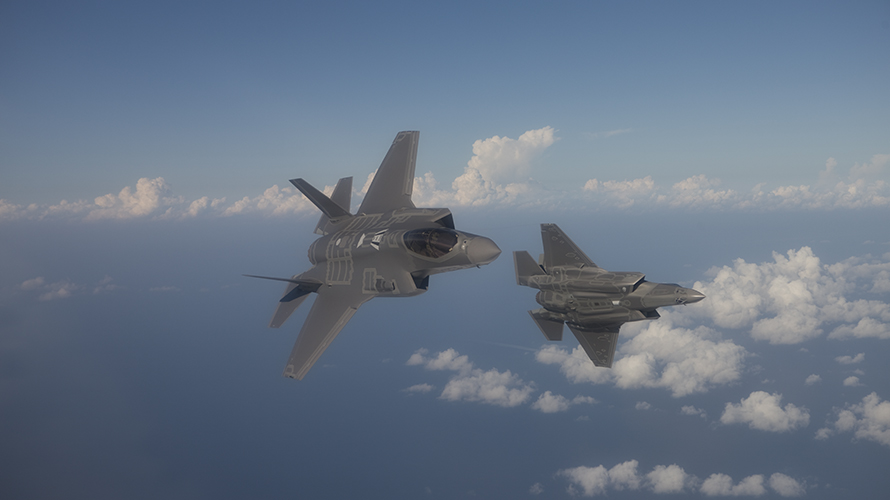 I have been travelling to Australia and working with the Williams Foundation in Canberra for five years. What I have found most fascinating about my time there and the journey of discovery of the RAAF is how they have fully embraced the F-35 and reshaping the eco system for the 21st century air combat force they are fully committed to building.

The Australians are keen to build out their role in regional support for the F-35 and are in the process of becoming a key regional sustainment power in the region. If the US gets really smart we can do sustained engagement whereby we fly to Australia to have our own F-35s maintained and updated and be able to operate in a crisis without having to have a large USAF FedEx-like force shuttling in support equipment, supplies and maintainers.

Now at the Avalon Air Show, Boeing and the RAAF announced the next step in how to leverage the F-35 and the global enterprise – building a cost effective unmanned wingman. Boeing Australia and the Commonwealth of Australia, as well as the RAAF, are partnering to build a drone to be flown with the F-35 and to team with various RAAF assets. And they plan for it be operational in less than five years.

As Air Marshal (retired) Geoff Brown put to me in a phone interview today: “The future is now.  We are looking to complement the F-35 with combat mass and look to this new unmanned asset as part of providing mass to a smaller air force like ours. We are clearly looking as well to augment our local industry not just to produce but to sustain our warfighting capabilities in a crisis as well. This does both.

“We are designing it to be inexpensive and design from the outset to be attributable. And we will engage with other F-35 partners to provide an export basis as well. And notably, this is the first Boeing aircraft designed offshore in recent memory. And for us, it is the concrete manifestation of how our Plan Jericho approach can affect new build platforms.”

Plan Jericho was launched when Geoff Brown was Air Chief and is the comprehensive effort by the RAAF to change the way they operate and to partner with industry in delivering what they refer to as a fifth generation air force.

As the current RAAF Chief, Air Marshal Leo Davies, noted at the Avalon Air Show: “If you ask me to explain why selected partnerships is this year’s theme, it’s because I know that Air Force would not be able to realize the fifth generation potential timeline. To prevail in the future, it will be essential to make the most of what we have built with researchers, industry, and our joint and international partners. The good news is we have great foundation in understanding that working together is helping you.”

Clearly, the Boeing Australia working relationship with the RAAF is a case in point. The focus of Plan Jericho is to find ways to take a good idea and make it part of the combat force.

Geoff Brown underscored: “Without the F-35 we would not be focusing they way we are.  To take the case of the unmanned wingman, if we did not have a low observable aircraft with 360 degree vision and protected coms we could not build simple, attributable unmanned systems designed to provide mass and be directed by the F-35 to deliver a combat effect.”

The Airpower Teaming System can be used in a variety of ways dependent upon which manned platform it is teaming with; for higher end operations, clearly the F-35 is the mother ship.  In other operations, it could be teamed with the P-8 or the Wedgetail to provide capabilities appropriate to their operational approaches and capabilities.

Although the initial press reports are highlighting the capability of the system to fly with virtually any manned aircraft, that is not the RAAF’s thinking. Clearly, where you use it and in what combat conditions you intend to fly will DECISIVELY affect where one would use such an unmanned aircraft. It is designed NOT to be survivable; it is DESIGNED to support a targeted mission, quite literally.

The Loyal Wingman Advanced Development Program is a four-year development program, which is being supported both by Boeing Australia and the Australian government.

There would be a clear fit with core allied needs such as being generated by the US Air Force and by the Royal Air Force and would be an ideal fit into the UK’’s Tempest program which is looking to leverage the F-35/Typhoon combat experience to build out new air combat capabilities.

According to Andrew McLaughlin of the Australian Defence Business Review:

“The overall design appears to place a strong emphasis on advanced signature management which will be a key requirement in order to operate in conjunction with the F-35 with the canted stabilizer, fuselage chines, aligned edges and composite structure all contributing to it low observability.”

Boeing’s decision to build the aircraft in Australia means that this would be the first air-breathing combat asset designed and built in Australia for a considerable period of time.

According to Shane Arnott, Director of Boeing’s Phantom Works: “This is the first time that Boeing has designed and developed an aircraft, an unmanned aircraft outside the United States in our 100 year history.”

He added that they are doing so in Australia for several key reasons.

First, the Australian government is committed to industrial partnerships to build out cutting edge capabilities. The new Australian export policy is important as well in shaping global opportunities.

Second, the geographical location of Australia and the nature of Australia geographically are important reasons. Here he had in mind the huge test ranges, which Australia has and can develop over time. The existence of good test airspace and a regulatory system which can accommodate unmanned testing, is important.

Third, the RAAF is firmly committed to becoming a fifth generation air force and with Plan Jericho they are walking the talk.

“The ADF with the RAAF state that they want to be the world’s first fifth generation air force which is a big ambition. With transformation programs like Jericho this program becomes a walking of that talk.”

Robbin Laird, a member of the Breaking Defense Board of Contributors, has been closely covering the Australian military for several years, making regular trips to the region and interviewing a broad range of senior officials. Laird, owner of the Second Line of Defense website, is a defense consultant.