The Marines Must Be Recognized: Rep. Jones Vs. Sen. McCain 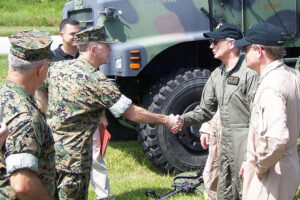 WASHINGTON: Roman senator Cato the Elder ended every single one of his senate speeches with the declaration that “Carthage must be destroyed.” Eventually, Carthage was. Rep. Walter B. Jones is just as relentless in his pursuit of increased official recognition of the Marine Corps. If he can just outlast fellow Republican Sen. John McCain in Congress, the Department of the Navy may one day become the “Department of the Navy and Marine Corps.”

“Their history justifies their being recognized in a heading of any official stationery for the Department of the Navy,” such as condolence letters to the families of Marines killed in action, said North Carolinian Jones, whose district includes Camp Lejeune and New River Marine Corps Air Station. “You always hear the Navy CNO (Chief of Naval Operations) and the commandant say, ‘we’re one fighting team,’” Jones told BD. “If you’re one fighting team, why not carry the name of the team?”

This year, as in every year since 2002, House Armed Services Committee member Jones has gotten a provision into the House version of the National Defense Authorization Act to codify that “one team” concept. This year it’s in Section 901: “Redesignation of the Department of the Navy as the Department of the Navy and Marine Corps,” would “formally recognize…the Marine Corps’ status as an equal partner with the Navy.”

As usual, the full House has approved the proposal, but Jones knows with near certainty that, also as usual, his idea will surely die at the powerful hands of McCain, the Senate Armed Services Committee chairman, who flatly opposes it. McCain, of course, is a Navy man through and through.

The Marines have never endorsed the proposal but surely wouldn’t mind if Jones succeeded, for they aren’t just the smallest armed service but also the most paranoid. Of course, it isn’t paranoia if they’re really out to get you, and history is replete with instances of powerful people trying to put the Marines out of business – usually by asking why we need a second army – or shrink the Corps to insignificance. 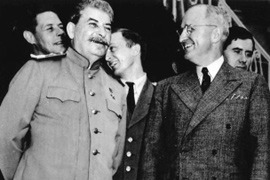 “For your information the Marine Corps is the Navy’s police force and as long as I am President that is what it will remain,” Harry Truman responded in 1950 when Rep. Gordon McDonough of California urged him to give the Marines a seat on the Joint Chiefs of Staff, (which the Corps obtained only in the 1970s). Irked by Marine Corps lobbying on the issue, Truman added that, “They have a propaganda machine that is almost equal to Stalin’s.”

McDonough put the president’s letter in the Congressional Record and within days Truman was publicly eating his words with a far longer letter of apology to the commandant. As Truman learned, the Marines have always been immensely popular in Congress. They’re also the best lobbyists in uniform – as Dick Cheney learned when he tried to cancel the V-22 Osprey when he was defense secretary.

Adding their name to the Navy Department surely means a lot less to the Corps than the Osprey did, but the Marines remain popular on Capitol Hill. The Jones proposal to rename the Navy Department routinely passes in the House, and in 2010, he got 425 House and 78 Senate cosponsors. But he couldn’t get the one vote he needed most – McCain’s.

“It’s that one man,” Jones said. But Jones, who is still crusading to get the Marine Corps to absolve the pilots of any fault in the April 2000 crash of an Osprey that killed them and 17 other marines, is just as unlikely to abandon this quest. “I just see things as right and wrong,” Jones said. “As long as I’m here, it’s always going to be in the House bill.”