WASHINGTON: The day before an embattled president rolls out an overdue budget that defense hawks say is $37 billion short, the Republican chairman of the House Armed Services Committee counseled against despair.

“As President Bush said in a different context, don’t be guilty of the soft bigotry of low expectations,” Rep. Mac Thornberry said this morning at the Brookings Institution.  “I can understand you can point to past failures and say, ‘oh, this is never gonna happen, they’re never going to get their act together.’ Even some of my colleagues are saying, ‘ok, we’re in for a year-long CR,'” which he told reporters later would be the “worst-case scenario.” (CR refers to the stopgap Continuing Resolutions that set federal spending on notoriously inefficient autopilot in the absence of a proper spending bill). “If that’s our mindset, then we will bring it to pass,” Thornberry warned.

“(But) many of us are determined to keep working on the substantive issues that affect the daily lives of the American people and not be completely consumed by political drama,” Thornberry told reporters after his public remarks. “You’ve got investigations going on; let Bob Mueller do his thing and the intelligence committees do theirs. But we would be negligent in our duties — both sides, by the way — if we allow ourselves to be consumed by that.”

In fact, Thornberry told the Brookings audience, “I think we have an opportunity— and I realize this will sound Pollyanna-ish.” Trump has loosened up the logjam enough that legislators are at least contemplating entitlement reforms (i.e. cuts) that would free up funding for discretionary spending, both domestic and defense. With two-thirds of the budget going to mandatory spending — mostly Medicare, Medicaid, Social Security, and interest on the debt — and just a seventh to defense, Thornberry said, repeating one of his favorite themes, “we are not going to fix our budget problems by cutting or curtailing the 14 percent while ignoring the 66-plus percent that is mandatory.”

Today, he said, “there are some big entitlements that people are talking about reforming, not only to save money but to help people receive better benefits from it, for example more state flexibility on Medicaid, (and) tax reform is in play, so the big moving pieces are being discussed and that gives us an opportunity to put a little bit of common sense into this discussion.” 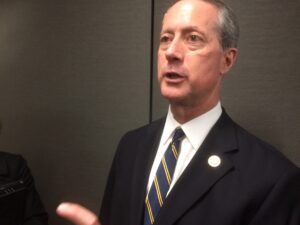 That said, cutting entitlements or raising taxes to protect discretionary spending is, of course, the “grand bargain” that has proven elusive since the much-loathed Budget Control Act passed in 2011. Thornberry admits such a deal would be difficult.

“Will it happen? I dunno. Will politics trump….” — here Thornberry paused to grimace as the audience laughed at the unintended pun — “everything else?” All he’d commit himself to was repeating, “we have an opportunity.”

Thornberry made clear he didn’t think much of the president’s budget, which requests $603 billion for defense. “It is fair to say it’s basically the Obama approach, with a little bit more but not much,” he said.

But the chairman steadfastly refused to say whether his committee would push for the $640 billion both Thornberry and his Senate counterpart, John McCain, have said is essential. After his public talk, reporters peppered him with followups on the topic, most of which the genial Texan gently deflected.

While the $603 billion topline was released weeks ago, the detailed budget is only coming out tomorrow, and Thornberry’s staff doesn’t seem to have gotten it much in advance. “It’ll take us a little bit of time to go through the specifics… and then look at what they have asked for,” was all Thornberry would say.

“My intention is to mark up in committee the latter part of June,” he said. “All of this is much further delayed than a normal year…. but we can’t keep waiting.”

“People are risking their lives for us,” Thornberry said. “It’s important for their sake that we have this defense authorization process move along.”